Here’s the Hitch: The Quest For Life, Freedom and the Afterlife

For many devout believers among the Judeo-Christian tradition, mankind's struggles don't end with our passing from this realm. And to be fair, a number of other cultures and long-practiced religious institutions spanning the centuries have maintained a belief in something that exists beyond our commitments in this physical life, as well. With belief in the afterlife, or even notions like ghosts and haunted sites, we're given a certain hope that there may be more to life than merely living and dying.

While the notion of something beyond the physical--or to quote Raymond Moody, belief in "Life After Life"--remains a popular theme among the multitudes, there are nonetheless those who would argue that notions of an individual spirit existing beyond the mortal confines of the body is pure rubbish. Thus, it brings a touch of irony in knowing one of the staunchest critics, in recent times, of there being a potential for consciousness persisting after the body dies, has himself now passed from the mortal realm. 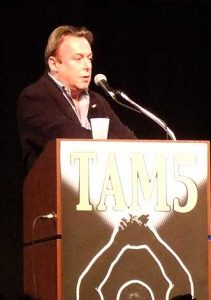 Yes, I'm speaking of none other than Christopher Hitchens, the erudite political and philosophical firebrand whose books, including God is Not Great and his recent autobiography Hitch 22: A Memoir illustrated with harsh lucidity the author's own doubt that there could be more to our existence than what the physical body alone may allow. Of the writer's passing, I offered the following earlier today:

One of the brightest minds we've ever seen, Christopher Hitchens, has come and gone. Ideologically perpendicular to most and intellectually parallel only to the clouds, the man's genius, and firebrand, were certainly not paralleled by most humans. Whether you loved him, hated him, or merely observed him over the years like so many of us did, it's a mind like his that so many of us will miss... and though I'm certain there was no heaven waiting for Hitch (he woudn't have wanted one, at least), his is not a spirit that will be forgotten. If nothing else, I hope he knows the freedom and liberty he admired throughout his life... da mihi libertatem aut da mihi mortem.

But in wishing Hitchens well in the afterlife, we are similarly given opportunity to consider the nature of reality, and of course, the potential for there being an afterlife. A recent article on the notion of religious beliefs and people's apparent guilt with regard to disbelief was featured at The Guardian, with some of the more heady criticisms presented by the ever-controversial (and tactful) Richard Dawkins, who argues that many, rather than holding belief in a creator or divinity in the great beyond, are instead quite attached to the mere belief in belief itself.

Belief in belief for its own sake is so prevalent that it makes non-believers feel guilty. Odd though it seems, people who can't accept propositions for which no empirical evidence exists tend to suffer more self-doubt than those who take great leaps of faith into the unknown. And this may help to explain why books denying the existence of God – Dawkins's one, for example, and Christopher Hitchens's God Is Not Great – shoot straight to the top of the bestseller lists. For even in our overwhelmingly secular society, belief in God is still regarded, even by those who don't have it, as evidence of a person's respectability; and guilt-ridden non-believers cannot get enough reassurance that it is perfectly acceptable to be an atheist.

Sure, there may be respectability that "belief" in a God can lend to an individual; this has become curiously the case in the determinations made of American political candidates. But taking this approach, the notion that a God exists, or for that matter, spirits of the dead, can also present troubles for us in equal measure to the assurances they lend. While many of religious predisposition consider the idea of "ghosts" to be relative to demonic forces or evil spirits, the very idea that a soul could indeed exist beyond the physical body is a reassurance, in the sense that it shows us that death is not the ultimate end. If anything, tantamount to notions of a fully conscious, non-physical spirit is the potential for absolute freedom in the truest sense; when we leave the world of the physical, perhaps we know real spiritual mobility, and thus become capable of harnessing the greater truth hidden away within the cosmos... often of a variety that steadily surpasses the conventions of human thinking.

The cluttered box that becomes human ideology, while grasping desperately for freedom and truth, can often become stifling as one is drawn ever more deeply into a narrow-sighted vision (to put it ironically) of what "truth" is supposed to be. Thus, whether we choose to believe in ghosts, gods, devils and demons, or the afterlife, we shouldn't allow ourselves to become so completely stoic in our opinions that we become blinded to the obvious truth that surpasses any human understanding: that we simply cannot know all the answers, and that trying to surmise truth in partiality only leads us into the quicksand of an intellectual black hole. Once we've fallen in, it can become a damning process trying to get unstuck.

While proof of an afterlife cannot be asserted without any doubt, we also cannot, as humans, assume to be so all-knowing that we can say, with certainty, that there aren't forces of divinity that supersede all things known in the physical world. We also cannot rule out the possibility that spirits of the dead might linger on after the body ceases to live. Certainly, if there is any afterlife waiting for the likes of Christopher Hitchens, he will with no doubt have a field day unraveling the mysteries on that clandestine other side of the spiritual senses; but rather than representing the greatest of all "gotchas", perhaps instead it will be an introduction, of sorts, to a new kind of freedom and liberty. Philosophically, this was certainly the quest Hitchens seemed to care most for in his life, and as with any good hope for a life beyond the living should be, it may not only be a new notion of what "truth" is that he discovers. For all we know, it may be that he'll find that a new definition of freedom itself exists in such a place just as well... and that is something all spirits--living or dead--seem to desire.