At his birth in Los Angeles on October 2, 1914, one Jack Parsons was given the memorable and unusual name of Marvel Whiteside Parsons, and lived a truly extraordinary, but short, life. An undoubted genius, he indirectly led NASA to send the Apollo astronauts to the Moon in 1969. Moreover, the Aerojet Corporation – which Parsons personally founded - today produces solid-fuel rocket boosters for the Space Shuttle that are based on Parsons’ very own, decades-old innovations.

For his accomplishments, a large crater on the far side of the Moon was named in his honor, and each and every year, on Halloween no less, NASA’s Jet Propulsion Laboratory holds an open-house memorial, replete with mannequins of Jack Parsons and his early JPL cohorts known as “Nativity Day.” And, within the aerospace community, there is a longstanding joke that JPL actually stands for “Jack Parsons Laboratory” or “Jack Parsons Lives.

Parsons, who was so revered and honored by very senior figures within the U.S. space-program, was an admitted occultist, a follower of the “Great Beast” himself, Aleister Crowley, and someone who topped even Crowley himself by engaging in bestiality with the family dog and sexual relations with his own mother, perhaps at the same time, no less. Moreover, before each rocket test, Parsons would undertake a ritual to try and invoke the Greek god, Pan.

It was perhaps inevitable that his path would eventually cross with that of Aleister Crowley. In 1942, after the two had become acquainted as a result of their like-minds and pursuits, Crowley chose Parsons to lead the Agape Lodge of the Thelemic Ordo Templi Orientis (O.T.O.) in California, after Crowley expelled one Wilfred Smith from the position. The devoted Parsons eagerly practiced Aleister Crowley’s Thelemic Rituals, the goal of which was the creation of a new breed of human being that, if the ritual proved successful, would lead to the destruction of Christianity.

Meanwhile, during the same time frame, and within the confines of his Pasadena mansion – dubbed “The Parsonage” – the darkly handsome Parsons held parties for those friends and colleagues in the field of science fiction. Indeed, writers Robert Heinlein, Jack Williamson, Anthony Boucher, and Ray Bradbury were all regular visitors to Parsons’ home. Parsons, then, was a highly interesting character, who moved in intriguing circles filled with powerful and influential players. 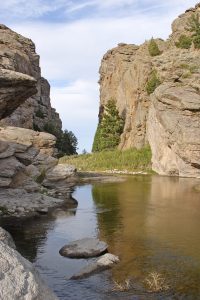 Much of Parsons’ – and the JPL’s – initial rocket research in this period was undertaken at the appropriately-named Devil’s Gate Dam in Pasadena, California. Interestingly, the JPL was itself established at this very locale in 1930 by the California Institute of Technology. The dam had been constructed a decade earlier by engineers from the Los Angeles County Flood Control District and took its title from Devil’s Gate Gorge, a rocky out-cropping that eerily resembles a demonic face and which is located in a narrow canyon of the Arroyo Seco, which is a riverbed that extends from the San Gabriel Mountains into the Los Angeles basin.

Some say that the face is merely a classic case of Pareidolia - the process by which the human brain can interpret random imagery as having some meaning or significance behind it. A classic example being the way in which, at one time or another, most of us have seen faces in clouds. But is that really all that is behind the satanic face of the old dam? Maybe not...

In late 2010, probably the most controversial book I have ever written was published: Final Events. The book told the unsettling story of a think-tank-style group deeply buried within the heart of the U.S. Government that addressed the UFO phenomenon at a deep and secret level for more than half a century. The members came to accept a disturbing conclusion about that same phenomenon: namely, that rather than having extraterrestrial origins, it was satanic in nature. And I do mean that literally: fire, brimstone, the Devil, and a malignant deception in which cold-hearted demons, masquerading as aliens, were working to an agenda of their devilish master to provoke Armageddon.

As very often happens when I have a new book out, people who have read it, and who feel they have something to say about its contents, contact me. And, certainly, Final Events was no different. One of those who did precisely that was a Californian man named Bob Jessup who had an amazing story to relate concerning Devil’s Gate Dam, a brief history of which I included in Final Events while telling the story and history of Jack Parsons.

Jessup (who, I should perhaps stress, was no relation to famed 1950s-era UFO researcher/author Morris K. Jessup) claimed to have seen a truly terrifying beast at the foot of Devil’s Gate Gorge only a few nights after reading Final Events! This almost sounded too good to be true, even by my standards! But, I listened carefully to what Jessup had to say.

With its surrounding and nearby hills, dense woodland, and winding pathways, the entire area is the ideal place for hikers and horse-riders to hang out and get some exercise. And Jessup fell into the former category: each weekday afternoon, after work, he would walk his dog, Miles, for an hour or so around the wooded paths, while taking in the pleasant and welcoming scenery. But what Jessup wanted to tell me was not pleasant. And it most certainly wasn’t welcoming either.

On a cold, dark, late afternoon in January 2011, Jessup was nearing Devil’s Gate Gorge when he heard an ear-splitting screech that he said was like a combination of the shrill cry of a fox and someone dragging their fingernails across a chalkboard. In other words: not at all inviting. But, it was extremely loud, very weird, and seemed to be coming from somewhere above him. He looked around – first to the trees, then to the sloping pathway that one takes from the dam down to the base of the Gorge. No luck.

It was when he looked closer at the Gorge itself, however, and that rocky, devil-like face that Jessup saw something that chilled him to the bone: a milk-white-colored, skinny, humanoid creature sporting a large pair of equally-white bat-type wings, scaling the Gorge, just like, in Jessup’s very own words, “Spiderman climbing a building.”Jessup could only stand and stare in awe and fear as the creature stared directly at him, issued another ear-splitting scream, and “kind of hopped and jumped and leapt away over the top [of the Gorge].” Jessup did not wait around to see if it elected to return.

I spent about forty-five minutes on the phone interviewing Jessup, who came across clear, lucid, but downright puzzled, and not to mention significantly worried by the encounter – which, at the time of writing these words, has not been repeated, much to Jessup’s personal relief.

The occult rituals of Jack Parsons and Bob Jessup’s account aside, certainly the most disturbing thing about Devil’s Gate Dam and Devils’ Gate Gorge were

the tragic deaths and disappearances of a number of children in the area back in the 1950s. In August of 1956, Donald Lee Baker (thirteen) and Brenda Jo Howell (eleven) vanished while riding their bikes on land directly behind the dam. Both bikes and Brenda’s jacket were subsequently found nearby. The children, unfortunately, were not.

Then, in March 1957, an eight-year-old boy – Tommy Bowman – seemingly vanished into the middle of nowhere while hiking around the gorge with his family. One minute, little Tommy was there, the next he was utterly and forever gone. Three years later, in 1960, a young boy named Bruce Kremen vanished under mysterious circumstances in the same area.

As for Donald and Brenda, their disappearances were finally solved when a deranged serial-killer named Mack Ray Edwards confessed to having killed them – and who later committed suicide while doing time in San Quentin. The other two cases remain unresolved. And additional tragedy and death dominates the bleak area, too. Pasadena is also home to the Colorado Street Bridge, which just happens to cross over the Arroyo Seco bed. Locally, the large construction has a very different name: Suicide Bridge. Its name is very apt: the number of people who have now thrown themselves off the bridge – to their deaths - since its construction in 1912 is now into three-figures.

Some might disagree, but it seems to me – after researching the history of the area - that an atmosphere of distinct negativity and evilness has enveloped Devil’s Gate Dam. It's a dark atmosphere out of which strode a serial-killer, a winged demon, a famous occultist without whose work NASA would likely never have been founded, and overwhelming, unsettling tragedy.

Since many of the suicides predated Jack Parsons’ presence at the area, we cannot lay the blame on his ritualistic ceremonies and his ties to Aleister Crowley. But, one cannot deny the possibility that his actions may have amplified the air of menace and negativity that enveloped the devilish dam in later years.

The Ancient Nukes Question: Were There WMD’s in Prehistoric Times?