The Gargoyles of Chile

The deep, shadow shrouded jungles of South America are rife with carnivorous predators rarely seen by the human eye, but as intimidating as the creatures lurking in the dense rain forests of this mysterious continent may be, the arid plains of northern Chile are said to harbor a colony of chillingly bizarre beasts, which are quite unlike anything supposed to be living on the Earth.

Situated in the northernmost portion of Chile, less than 12-miles away from the port city of Arica, is a sprawling swathe of red sand desert known as Pampa Acha. The only real nod to the existence of humanity in this desolate region is the Pan-American Highway, which twists through this barren wasteland like an asphalt serpent.

It was on this lonesome stretch of road that in July of 2004, an army sub-officer with the “Cazadores” regiment named Carlos Abett de la Torre, his wife Teresa, their three children and a nephew would have a harrowing encounter with a group of fantastic creatures, which seemed to jump straight out of the pages of an ancient bestiary.

THE TORRE FAMILY AND THE GARGOYLES: 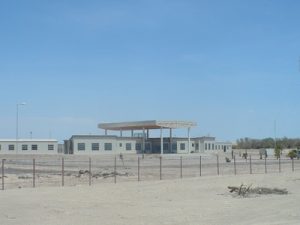 At approximately 7:00 pm. on the day in question, the Torre family packed into Carlos’ pick-up truck and departed from their quarters in Fuerte Baquedano, which is located in the military community of Pozo Almonte, heading toward Arica to visit some relatives.

Knowing full well that he was in for long and monotonous drive with a car full of children, Carlos gamely threw the truck into gear and began motoring down the same highway he had been traveling for the better part of 25 years.

About two hours into their journey, Carlos was cruising at about 65-miles per hour through the Pampa Acha approximately 20-miles south of Arica. The road ahead was illuminated not only by the pick-up’s headlamps, but the bright moon that hovered above them in the cloudless sky. That was when Carlos’ eldest daughter, Carmen, noticed a pair of extraordinary entities through the back window of the vehicle. According to Carmen she was astounded to see two creatures leisurely “floating” in the skies above. In her own words:

"I was traveling in the backseat with my brothers, talking, and suddenly everything went dark. Then I told my brother what I was seeing and he told me to keep quiet, because Mom gets nervous. Later I looked through the window and saw some things that looked like birds, with dogs' heads and back swept wings. My father said they were like gargoyles." 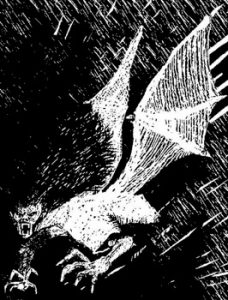 Carmen later estimated that the strange airborne critters that flew over her father’s pick-up truck were at least 6-feet in length and she admitted that at first she wasn't sure if the creatures had wings or legs, but that the appendages were angled toward the rear of the creatures.

Carmen and her brother watched as the outlandish animals paced the truck, afraid to speak, lest they panic their anxiety prone mother. But their efforts were wasted as Teresa, who sat next to Carlos in the front seat, would catch sight of the peculiar avian duo through the windshield just moments later.

From her vantage point Teresa was afforded the best view of these anomalous animals, which the press would quote her as saying resembled "dog-faced kangaroos.” She claimed that the “gargoyles” seemed to match the speed of the truck, occasionally slipping ahead, then falling back, never traveling more than 60-feet from the vehicle.

By this point Carlos and the rest of his frightened brood were all stealing skyward glances and catching glimpses of these soaring evolutionary nightmares. He accelerated the truck, praying under his breath, terrified of the fate that might befall him and his family if these creatures decided to swoop down and attack their vehicle. The Torre family was in such a state of shock that none of them spoke. Carmen described the scene:

“We were speechless for some ten minutes [then] my Mom told us to react, and then we started discussing what we'd seen."

Just when the Torre family was growing accustomed to the flying fiends above, another pair of the same species leapt in front of the truck on strong hind legs, which were shorter than their upper legs.  Carlos managed to avert a collision with these land bound “gargoyles” and increased the pick-up’s speed, eventually leaving all four of the beasts behind.

When Torre family safely arrived in Arica they told their relatives about their bizarre sightings, but swore them to secrecy, concerned that the public ridicule which might follow the unveiling of their tale would somehow damage the military career of the family’s patriarch. 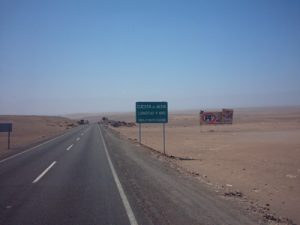 Although their sojourn with their extended family was enjoyable, it goes without saying that the entire Torre clan was anxious about the trip home.

Teresa even conceded: "We were terrified to go back," but, much like every other journey Carlos had taken through Pampa Acha, the expedition proved to be mercifully uneventful.

Once back on base in Pozo Almonte, the Torre family honored their oath of silence, but when another sub-officer, Diego Riquelme, claimed to have encountered a dinosaur-like creature on the same stretch of road a few weeks later they decided to come clean.

Needless to say it wasn’t long before the press got wind of these bizarre stories and began churning out articles about the monsters seen on the Pan-American Highway. Soon after the story broke Scott Corrales of the Institute of Hispanic Ufology translated the story for the English speaking world.

The usually open minded Chilean press was quick to claim that the eyewitnesses were likely seeing nothing more than ostriches, which must have escaped from a local breeder. The fact ostriches are flightless and that none of the birds were reported missing in the area was ignored by the media.

It also seems unlikely that seven individual eyewitnesses would confuse ostriches for either on the wing gargoyles or prehistoric reptiles, regardless of how unbelievable the alternative may be. So if these observers were not bearing witness to bird refuge escapees, then the question remains…

WHAT ARE THESE THINGS?

It’s a fair question considering that the list of dog headed, bat winged, kangaroo legged and potentially reptilian creatures that stand over 6-feet tall is not a large one… In fact, nothing like that should exist, nevertheless let’s keep an open mind and look at few of our options here. I have to admit that when I first stumbled across this report my initial thought was that the eyewitness descriptions were akin to reports of the infamous… 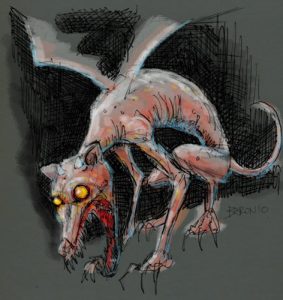 For reasons difficult to discern the description of the notorious blood sucking chupacabra -- it’s name is Spanish for “goat sucker,” which was initially said to be its favorite prey -- has varied wildly since the first reports of these beasts emerged from Puerto Rico in the mid-1990s.

Nowadays many people believe that the mangy coy dogs so often videotaped near the Texas/Mexico border represent chupacabra, but these sickly canine creatures are nothing like the classic depictions of these ferocious fiends.

Initially chupacabra were described as being semi- reptilian beasts with Kangaroo legs, upon which it could leap astounding distances. These creatures were also said to have canine (and occasionally feline) features, large fangs and, very often, bat-like wings. A forked tongue and porcupine-like spines were also commonly seen attributes. All versions of this creature were said to live on the blood of animals.

The above description sounds a lot like the “dog faced gargoyles” described by the Torres and Riquelme. In support of this hypothesis is the fact that since 2004 there have been sporadic reports hailing from South America regarding similar varmints, some of which have been allegedly spotted near scores of bird carcasses that were discovered to be devoid of blood.

While many people are of the mind that the late blooming, so to speak, of the chupacabra phenomenon is the result of it being either of alien extraction or the product of an American genetic experiment gone terribly awry, the thought that these gargoyles might be the origin for tales of the enigmatic chupacabra is an intriguing one. It’s also worth considering the fact that these critters seem to look a helluva’ lot like the… 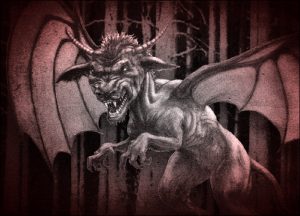 Although it is said to have hooves rather than coiled marsupial legs, the bat winged dog-like description of these gargoyles also seems to bear an uncanny resemblance to eyewitness accounts of the New Jersey Devil.

Nevertheless, the fact that the Jersey Devil is an ostensibly supernatural rather than traditionally cryptozoological entity, combined with the lack of any significant eyewitness accounts from outside the Pine Barrens, leads me to believe that this is just a farfetched shot in the dark.

Okay, so removing both the cryptozoological, paranormal and potentially ufological elements and look at some of South America’s indigenous fauna to see if we can come up with a culprit. There are a handful of options, but the character that seems to most fit the bill is… 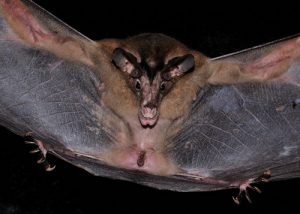 Vampyrum Spectrum -- also known as the Spectral or false vampire bat -- is native to both South and Central America. This nocturnal predator ranges from Mexico to central Brazil and Peru. It is not only the largest bat found in the “New World,” but it is also the biggest carnivorous bat on the planet.

With its elongated nose and 3-foot wingspan it’s not entirely unreasonable to deduce that the Torre family spied a small group of these animals and assumed the worst. Granted the arid deserts of northern Chili are nothing like the prototypical habitat of deciduous forests and swampy areas where bunches of five Vampyrum Spectrum nest in hollow trees near bodies of water, but it is not that unusual for small colonies of creatures to occasionally stray from their usual environment for a variety of reasons.

One could also argue that a pair of gargantuan non-indigenous bats that are seen at night by young and inexperienced eyewitnesses may well appear to be larger than they are. Still, as convenient as a rogue population of bats might be in explaining away these events, they cannot account for the leaping, winged, kangaroo-like creatures that temporarily blocked the Torre's path in full view of their truck’s headlights. 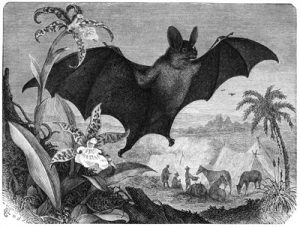 So what is it that we are dealing with here? It seems fairly evident that if we are not contending with a mistaken identification or outright hoax, then these gargoyles must be either a variety of unknown flying mammal or perhaps a colossal species of heretofore undiscovered bat.

Strangely enough, according to both Carlos and the Carabineros -- the uniformed Chilean national police force -- there were no reports of strange creatures on the well traveled highway until 2004. Does this suggest a migratory pattern for these beasts or might we surmise that jungle deforestation or some other manner of likely human encroachment has forced these critters out of hiding and into the public eye?

Until one of the Chilean gargoyles is shot, captured or convincingly caught on film this mystery will no doubt endure… and if you ever find yourself traipsing around northern Chili at night, look to the skies… you never know what you’re going to see.

Here’s the Hitch: The Quest For Life, Freedom and the Afterlife