Unknown Visitors and Outsiders: There’s a Folk Devil in Every Crowd

The long sordid history of Forteana is rife with tales of chance encounters with unsettling weirdos and beasts whose very existence seems impossible, at very best. Due to the nature of these strange sorts of visits, it becomes difficult to discern how much of the mythos that surrounds such beings from the twilight world of the unexplained is based on pure fact, and how much could stem from the surreal archetypal realms of the human mind.

There are curious reports of creeping strangers the likes of the infamous "Grinning Man," described by John Keel in his volumes pertaining to supernatural lore and oddities. There are reports of "Mad Gassers" that sneak noxious fumes into the homes of the middle class citizenry through pinhole-sized crevices along the edges of windows. There are also tales of demons, devils, and otherworldly goonies that lurch at the unsuspecting as they wander suburban roadsides during the still moments after the sun has gone down. While many of these denizens of the shadow realm might be attributed to various goings on of the physical realm (if not misidentification or outright hoaxes), one of their curious propensities relies on their odd tendency to court ill fortune and disasters... and for many readers of this blog, such creepy creatures of the night do have a particular name...

Indeed, here I'm speaking of what I call "Fortean Folk Devils," the more high-strangeness entities within the areas of Forteana tha bear a number of consistencies throughout various reports, often bridging the gap between differences in cultures beliefs and societal norms. Recently, I spent a few minutes outlining the curious preponderance of strange visitations by uninvited guests throughout the centuries, encapsulating this "Folk Devil" concept, where I noted that these "entities," whatever they may be, could be both physical, in some sense, as well as the result of some strange archetypal formation or manifestation from within the mind. But how, exactly, could this be? Does it suggest that people's reports of strange encounters with mystery beings might actually be rooted in our own subconscious, and that the kinds of stories being elucidated by those claiming to have had encounters are really the result of "thought projections" or, to borrow the Tibetan term for this, Tulpas? 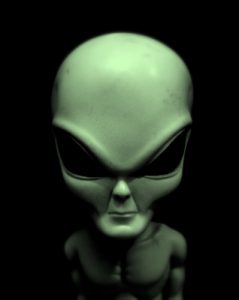 To answer these questions might really involve a foray into the realms of psychology and the subconscious mind, and certain extends beyond the scope of the present article. However, to begin with another question, I first might be inclined to ask, "can the resolution to the Folk Devil mystery not draw from each of these, perhaps being both physical as well as archetypal or mystical in nature? In a sense, it might not be too much of a stretch to consider whether the human mind, under the right circumstances, couldn't interpret an uncomfortable or unsettling event in such a way that it literally interprets (or we might even say "projects) imagery that, while not wholly physical, is something that appears very real in the eye of the beholder. Even more curious, perhaps, would be the notion that certain phenomena that is discussed within the annals of paranormalia could bear striking resemblance to each other from one encounter to the next, based solely on the consistent elements involving human perception that stem from within the mind. To put it concisely, the sorts of "archetypes" that Carl Jung spoke of could be likened to being "programs" that come pre-installed within every human mind, and remain capable of interpreting various phenomenon, given certain conditions, with remarkable consistency.

I don't think this removes the possibility that there could be strange beings in a very real sense that do appear and haunt us from the fringes of humanity at times. What it does lend itself to, however, is the resulting cultural interpretations that stem from such encounters, lending to a sort of legendary substructure that builds itself into our folklore, inspired by people's chance encounters with outright weirdness. A recent article featured by Reuters news even discussed this notion to some degree, building on the cultural parallels that seem to exist within the interpretation of ideas such as "the unknown visitor," a concept that has close cultural consistency spanning a number of traditions around the globe. Perhaps unraveling the mysteries of the Fortean realm lay not so much in interpreting whether they exist solely within a physical capacity, or merely within the realms of the mind; it could very well be that culture, perception, and belief work together to interweave what ultimately becomes our interpretation of reality, and in ways that continue to allude us.

Spying on the Saucer Seekers