Close Encounters of the Giant Kind

For decades, within the annals of Ufology, countless types of apparent alien entity have been reported by startled witnesses to UFOs and their other-worldly crews. The list of extraterrestrial life forms is truly bizarre and includes beings that resemble (a) huge, flying jellyfish; (b) oversized bananas; (c) the Michelin Man; and (d) long-nosed, scrawny humanoids with glowing red eyes. But, such beings are most assuredly not typical of those reported in the vast majority of close encounters of the ufological kind. Indeed, they are firmly in the minority. Dominating the UFO scene are without doubt the human-looking Space-Brothers, the insect-like Grays, and the sinister Reptilians. But, there are a surprising number of reports on file describing giant-sized aliens, too...

While the tales of alien giants most certainly do not attract the same sort of attention and acclaim as their long-haired cousins did way back in the Contactee-driven era of the 1950s, and the emotionless Grays do today, that does not mean such issues are of no consequence. In fact, one could convincingly argue quite the opposite!

Two such notable cases emanate from with the British Isles; the details of one of which were given to Charles Bowen, a former editor of Flying Saucer Review magazine, and that were duly published in a classic book on alien entities that Bowen edited himself, The Humanoids.

The year was 1958 and the location was very near to Balmoral, Scotland. As part of their basic training, an Aberdeen-based unit of the Territorial Army had been dispatched to the area in question to take part in a weekend of maneuvers.

During the course of the exercise, two of the group were deployed to guard a small hilltop and, fully equipped, set about digging themselves a trench for cover. On the first morning, just as dawn was breaking, both heard what they later described as a strange “gurgling” sound that seemed to originate from behind a dense group of trees, several hundred yards from their position. Unsurprisingly somewhat curious, they set out to investigate, when two giant, humanoid figures suddenly emerged from the shadows and proceeded towards them in ominous, lumbering fashion. 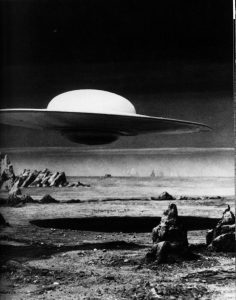 Naturally overcome with overwhelming terror, the pair hastily retreated. As they ran in panicked style, they heard a “swishing noise,” and glancing over their shoulders saw a gigantic, disc-shaped object in the sky above which appeared to be following them. Reportedly “pulsating,” the UFO swooped low over their heads and – to the complete and utter relief of the pair - quickly disappeared, curiously trailing a shower of sparks as it vanished from view.

A similar case, involving the Schwab family, who was then living in the English city of Bath, occurred late one weekend night in mid March 1978, while they were attending a family get-together in the county of Wiltshire. While driving past the legendary Stonehenge around 11.00 p.m., they were shocked to the core by the startling sight of a “twelve-foot-tall thing, like a giant man,” standing in the middle of the road.

Not surprisingly, Mr. Schwab brought the car to a rapid, screeching halt, and he, his wife and son watched amazed as a bright light from above suddenly enveloped the mighty being, and which ‘”lit it up and we could see it was like me and you, but twice as tall and in a silver suit and two big eyes [sic].”

Even more startling, the huge creature then began to slowly rise into the beam of light – which, the three could now see, was “coming out of the bottom of a big square-shaped object in the sky, and black [in color] that hummed so loud and made us all feel sick.”

Within seconds, the giant and the beam of light were gone, and the mysterious craft duly soared into the heavens, leaving the Schwab family wondering what on earth – or, very possibly, off it – had just happened.

Rogue cases of Goliath-like aliens in decades past may not attract the same levels of attention and fascination as those of today’s alleged DNA-stealing, pasty, skinny, denizens of Zeta Reticuli, but that does not mean they are without merit.

After all, if extraterrestrials are visiting us, then perhaps – just like us, the Human Race – they come in all sorts of shapes and sizes!

Mothy Misconceptions: Clearing The Air About the Mothman Mythos