Many people claim to be able to perform such astounding feats as reading the minds of others, as well as seeing into the future to glimpse events that haven't yet happened in chronological time. Claims among those believed to possess psychic abilities such as these, while remaining unproven scientifically, are still prolific enough that they have managed to permeate our culture, and have inspired numerous institutions over the decades to undertake attempts at explaining what they could be, how they could manifest, and perhaps most importantly, how others might attain the use of such "gifts."

In truth, within the next several decades, we may begin to see technology that will allow humans abilities very similar to those which professed psychics already claim to have. But in such a world of tomorrow, could there be dangers associated with societies where virtually anyone can utilize psychic prowess to their advantage... and for good or ill, based solely on their own desire? 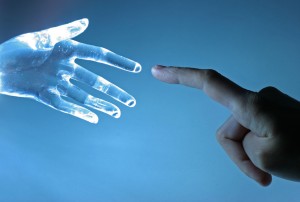 Recently at The Gralien Report, I wrote a piece that touched on an area that may point to the way some present technology is already tapping into people's ability to predict things to come... and how some of us might even be able to turn a profit from doing so. The article focused on a new company called Intrade, which has created a market based on people's predictions of events to come in the world of politics, money, sports, and a host of other areas of interest that "crowd-sources data from individuals who stand to gain monetarily from a circumstance, who thus are more likely to make educated guesses before risking their capital."

I further speculated that Intrade's unique process of "rewarding" those making predictions through their interface (if you're correct about a prediction, your stocks rise in that market) could amount to the beginnings of a sort of functional "cyber-psy," which I've begun to refer to as simply psybernetics. My reasons for this sort of speculation are simple: when there is a payoff on the other end of a prediction one is making (and furthermore, the risk of losing capital if they're wrong), then we might suppose that people involved in such e-investing will be far more careful with the predictions they cast. The cumulative effect in the long run will be a likely trend toward correct probabilities among experienced users, which not only guarantees them profit, but also allows people to monitor the statistic results of information Intrade will be collecting... and thus offer "hints" of what the future may hold that are more likely to be accurate than the single guessing of any one person.

This isn't the only area where information collected online has been examined for it's potential use in predicting future events. A paper by Sitaram Asur and Bernardo A. Huberman of HP Labs in Palo Alto, California titled "Predicting the Future With Social Media" focused on a similar idea: that information gathered through social media sites like Twitter and Facebook may also yield information that can more accurately predict future events than major companies and market forecasts.

Could existing technology already be crowd-sourcing people's telepathic abilities, or at very least, aggregating the most likely outcomes among people's educated guesses to forecast the future? Taking this one step further, if trends such as these among websites begin to spill over into other new and emerging technologies in the coming years, we may very well begin to see a variety of forms of "psychic" capabilities becoming available to the masses, and perhaps not only those relegated to looking into the future.

Granted, there is always good that comes with the bad, too. In his book Grey Aliens and the Harvesting of Human Souls, British author Nigel Kerner discussed a futuristic microchip for which the proposed design would entail the gathering of data on humans. Named the "Soul Catcher 2025" for the estimated year of its functional completion, the implanted device would allegedly "be like an aircraft's black box and would enhance communications beyond current concepts," allowing the recording of virtually every aspect of an individual's existence; and perhaps even the ability to transfer that stored information to other locations. "By combining this information with a record of a person's genes, we could recreate a person physically, emotionally, and spiritually," according to Dr. Chris Winter of British Telecom's Artificial Life team, who oversees the project. Indeed, while such technology might be incredible by today's standards, it also seems that it could become inevitable in our future... and perhaps arriving packaged with certain dangerous potentials.

In essence, the very sorts of things that we might call "extra-sensory" today may become very accessible in a future world, where technological trends will continue to bridge the gap between our biological limitations, and the vast and incredible possibilities of tomorrow. Those things which still seem inaccessible to us now may indeed be well within the grasp of humanity in years to come... and with any luck, we'll maintain the wisdom and moral capacity needed for handling such technology in ways that remain beneficial to our species.

Sacred Duality: The Strange and Unseen Elements of our Everyday Lives