In early July 1947, something very unusual plunged to earth on the Foster Ranch, located in the wilds of Lincoln County, New Mexico, not far from the now-infamous town of Roswell. The event has been the subject of dozens of books, official studies undertaken by both the General Accounting Office and the U.S. Air Force, a plethora of television documentaries, a Hollywood movie, and considerable media scrutiny.

The admittedly-odd saga has left in its wake a near-mountain of theories to explain the event, including a weather balloon, a Project Mogul balloon secretly utilized to monitor for Soviet atomic-bomb tests, an extraterrestrial spacecraft, some dark and dubious high-altitude-exposure experiment using Japanese prisoners-of-war, a near-catastrophic atomic-bomb-based mishap, the crash of a V-2 rocket with shaved monkeys on-board, and an accident involving an early “Flying-Wing”-style aircraft, secretly built by transplanted German scientists who had relocated to the United States following the end of World War Two.

And, as I'm sure many of you will be aware, last year yet another theory for the Roswell affair surfaced. The latest story appeared in Annie Jacobsen's Area 51: An Uncensored History of America's Top Secret Military Base. The book included details of a sensational story suggesting that the Roswell craft and bodies were, in reality, the diabolical creations of a near-Faustian pact between the notorious Nazi (and "Angel of Death)," Dr. Josef Mengele and Soviet premier, Joseph Stalin.

The purpose of this early Cold War plan, so the book told it, was to plunge the United States into a kind of War of the Worlds-style panic (echoing the Orson Welles affair of 1938) by trying to convince the U.S. Government that aliens were invading. And how would the plan work? By placing grossly mutated children (courtesy of the crazed Mengele) inside a futuristic-looking aircraft designed by the brilliant aviation experts, the Horten brothers, and then try and convince the U.S. of the alien origins of both.

Unfortunately for Stalin, the plot failed when a storm brought down the craft and its "crew" in the wilds of New Mexico, an event that did not lead to widespread panic, but that instead was hastily covered-up by U.S. military authorities.

Is the story true? Was Jacobsen duped? Is it a blend of fact and fiction specifically weaved by government insiders to even further confuse the true nature of what did, or did not, happen outside of Roswell back in the summer of 1947? The questions are many, but definitive answers are less so. But, there's something else I want to talk about; something that is highly relevant to this particular saga.

The angle of insiders with links to Area 51 being told that Roswell was a Soviet hoax (involving genetically-altered human beings) is an intriguing one. Now, just so there can be no misunderstanding, I don't mean that because it's intriguing I believe it's the answer to the puzzle. I certainly don't think, at all, that this is the answer to Roswell. However, here's the important thing: the scenario of Area 51-linked people being told such a story does not begin and end with Jacobsen's informant.

In late 2010, my book, The NASA Conspiracies was published and included a whole chapter that told the tale of a man who had worked at Area 51 in the early 1970s, and who had heard a very similar story to that told to Jacobsen and which appeared in her 2011 book. It's a strange and convoluted saga involving a man named John who was exposed to a series of weird and controversial files that told astonishing tales of alien visitation and UFO crashes in the early, formative years of the Flying Saucer era. But, were those files real? That's the crux of John's revelations, as you will now see. 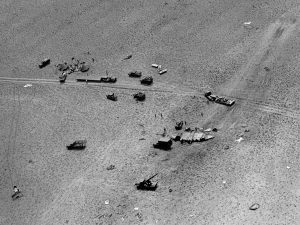 As I note in my book, The NASA Conspiracies: "John stressed that although the documentation at issue certainly looked genuine, he was never able to entirely dismiss from his mind the possibility that his exposure to the files could have been a part of some large, and very curious and convoluted, mind game on the part of NASA and the intelligence services, such as the CIA, Air Force Intelligence, and the National Security Agency."

I continue in the book as follows: "Since his work at Area 51 and his access to the files surfaced as a direct result of his FBI contacts, John speculated that his superiors may have exposed him to totally bogus materials at Area 51, and then watched his every move to see if he spoke out of turn, and to those without security clearances. The fact that John never did speak out of turn in that twelve month period, and was thereafter considered utterly trustworthy, led him to be rewarded with a near decade long career in the private security sector. It was a career that saw him move, practically effortlessly, within highly influential circles in the world of U.S. Intelligence that were totally unconnected to UFOs."

To me, at least, this is all very refreshing. Whistle-blowers are generally extremely keen to have their story believed; but John noted to me from the absolute outset (and as the above extract clearly demonstrates) that the nature of the data to which he was exposed should be addressed very carefully, and not accepted uncritically at all. Maybe, as John noted, the documentation was entirely bogus, prepared by disinformation specialists to test his reaction and response.

But, there's more. John related an aspect of the story to me, that was published in my NASA book, and which dealt with one specific set of papers that, today, we can see is highly relevant to the account provided to Jacobsen. I described it in the pages of my 2010 book like this:

"...John did assert, however, that there was a brief collection of documents dating from July 1947 speculating that this might have all been the result of a very ingenious hoax on the part of the Soviets – until, that is, it very quickly became acutely apparent to one and all that not even the Soviet Union would have had the required expertise to successfully pull off such a fantastic ruse, much less biologically alter, or mutate, a number of human beings into something very different."

To me, this is important, as we have old files seen and read by John (that ultimately found their way to Area 51 - they did not originate there) discussing the two central points of the story told to Jacobsen: (A) the idea that Roswell was a Soviet ruse; and (B) the theory that the bodies found at the crash-site might have been biologically altered or mutated by the Russians.

The story told by John, and published by me in late-2010, is astonishingly close to the one provided to Jacobsen and that appeared in her 2011 book. The big difference, of course, is that Jacobsen's Area 51 source believed the Russian theory, while the originators of the files read by John at Area 51 - and John himself, too - clearly did not accept it as having any validity at all.

But, that such files did apparently exist at Area 51, and did refer to both the Russian hoax angle and the issue of genetically altering human beings, does make me think that this Russian-themed story/theory was indeed in circulation amongst Area 51 personnel at some point decades ago.

And maybe some of those people who were exposed to the files, to the rumors, and (as John speculated as a possibility) to some weird loyalty-testing mind-game, came to accept the Russian story as being utterly genuine (such as Jacobsen's source), when in reality the truth, as John noted, may have been very different.

This controversy, I suspect, is far from over...