When people ask me about my favorite books, I'm often met with surprise when I tell them that most of them have very little - and, more often than not, absolutely nothing - to do with the realms of Ufology, Bigfoot, the Loch Ness Monster, and the many and varied similar topics that occupy much of my time. Amongst my most cherished of all titles are Keith Waterhouse's Billy Liar; Sir Arthur Conan Doyle's The Hound of the Baskervilles; and Jack Kerouac's Big Sur.

But, if I was put on the spot and asked to name my all-time favorite, it would have to be Hunter S. Thompson's The Rum Diary, which tells - in a definitively-masterful, and definitively-Gonzo style - the entertaining story of Thompson's early years and journalistic adventures on Puerto Rico, a place for which I have a great affinity, having worked there on a number of occasions. I eagerly devoured the book when it was first published in 1998, decades after it was actually written, and which is now a fine movie starring Johnny Depp.

And, it's perhaps because - having spent more than 20-years in the field of freelance-journalism myself - I can deeply relate to Thompson's literary romps in and around San Juan, that I immensely enjoyed Tabloid Man & the Baffling Chair of Death by Paul Bannister, which is a new book written very much in the spirit of the Gonzo-master's own work. And a fine piece of work Tabloid Man is, too, being equal-parts illuminating, hilarious, insightful and adventure-driven.

Bannister, like me, is a transplanted Brit, now living in the United States, and someone who - also like me - spends his days and nights earning a crust in the realm of freelance journalism. And, as Tabloid Man demonstrates - and as I can attest, too - it's a realm that can be as rewarding as it can be harsh, and as bizarre as it can be unpredictable (but in a very good way, if you keep your wits about you, and have a love of getting into the thick of things in search of a rollocking good story).

Basically, Tabloid Man tells the story of Bannister's life as a near-constantly-on-the road journo for numerous tabloids, but chiefly for the National Enquirer and its legendary boss, Generoso Paul "Gene" Pope, Jr., a fascinating character with a somewhat ruthless flair for business, a brilliant mind, and near-Machiavellian links to none other than the CIA. 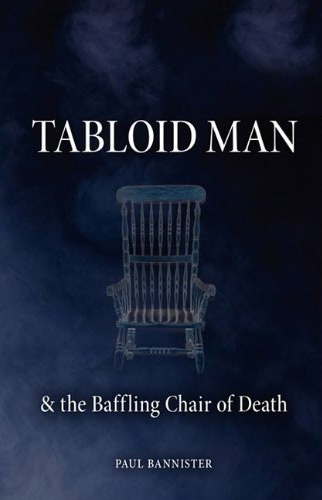 Given that Bannister spent many a year paying the bills courtesy of the Enquirer, we get to learn a great deal about his excursions to foreign and far-away lands in search of all manner of story - but very often relative to Hollywood scandal, sensational murder cases, and much more of an entertainingly controversial nature.

Particularly jaw-dropping are the stories Death by Python and Cougar Attack, which are as graphically horrific as they are fantastically captivating. Much the same can be said for Mafia Hit Man - a Sopranos-style affair from Bannister that provides a unique insight into the world of the hired assassin. In other words, Bannister is someone who has literally been there, done that, and lived to tell the tale.

But, one of the reasons I am so keen to tell you, the readers of Mysterious Universe, all about Tabloid Man is because our fearless author was someone who was at the absolute forefront of covering stories of a definitively paranormal and supernatural nature for the Enquirer.

Indeed, the book's sub-title (...& the Baffling Chair of Death) is a direct reference to an engagingly-weird story of an old, seemingly innocuous-looking, chair that, for many years, stood in a Yorkshire, England pub, eagerly inviting one and all to sit in it. The problem is that those who chose to do so often met with very quick and fatal ends. Or, at least, so the legend goes. Of course, for the Enquirer, as Bannister notes, this story was practically Manna from Heaven. Yep, the tale of the chair was a controversial one; but, by God, for getting one's foot in the door, it was a good one too!

It was also a story that - having helped secure for himself a good position and a "can-do" reputation with the Enquirer - led Bannister to be dispatched just about here, there, and everywhere in hot pursuit of further supernatural-themed stories, including tales of spectral Roman soldiers, encounters with the psychic-spies of the CIA, the spoon-bending exploits of Uri Geller, and a multiplicity of all-things ghostly and ghastly.

Coupled with highly amusing stories of (A) carefully-modified expense-claims (surely not!), (B) copious amounts of free-flowing booze, (C) adventures in exotic climes, (D) the undeniable camaraderie that comes with working with fellow-freelancers on breaking, historic stories, (E) last-minute flights to the other side of the planet, courtesy of the Enquirer, and (F) doing whatever needs to be done to get the story and earn the dollars, Tabloid Man is a first-class account of what goes behind the scenes in the the world of freelance journalism and its links to Hollywood, deep scandal, and all-things supernatural.

But, Tabloid Man is far more than just that. It's also a celebration of what it means to live rather than just to exist, of doing things on one's own terms, of grabbing the proverbial bull by the horns, and of the always-unpredictable adrenalin rush that accompanies the words of your forever-demanding editor: "Get on a plane to Thailand; someone has just seen Elvis!" Or, something like that anyway!

To purchase your own copy of Paul Bannister's Tabloid Man, go to: www.bannisterbooks.com. Disappointed, you won't be!