The Unholy and the Undead: The Trials of a Real Vampire Hunter?

They lurk in the shadows by cover of night, waiting for their victims to fall asleep. Then, entering bedrooms beneath the unforgiving shield that pale moonlight provides, the strike; biting the neck and sucking precious life's blood from the innocent. These are the unearthly habits of the vampire, and their particular manner of devilish dealing has continuously managed to capture both the minds and hearts of the masses, as evidenced by the nearly constant appeal this subject has maintained through books, films, and television.

For most of us, the fascination with Vampires ends with the silver screen. However, there have been a few to have come and gone who asserted far more interest in the subject than that which exists merely within the bounds of horror fiction. For some, Vampire hunting Van Helsing-style has grown out of a mere fascination with the occult, leaving those involved pondering whether blood-suckers that exist by night might not have some factual basis in reality.

I was reminded of one such individual while visiting The Reynolds Mansion, a haunted nineteenth century mansion in Western North Carolina, at the request of a friend who worked their. There were numerous stories of ghosts in the building, and while being given a private tour, the host, Billy Sanders, showed me a particularly unique item among his collection of macabre art and film memorabilia: an actual vampire kit, used as a prop in the 1960s Hammer Films release The Brides of Dracula.

Digging through the kit, one would find a coffin key, actual silver bullets, wooden stakes of carved oak, holy water, and a host of other things expected for use in battling the undead. However, perhaps my favorite item contained within this unusual collection of belongings was an old 1928 hardbound edition of Mantague Summers' The Vampire: his Kith and Kin.

Summers, born in 1880, had been described through his life as an eccentric occultist and clergyman, with a variety of unusual interests. One of his earliest published works dealt with poetry dedicated to the Bithynian youth Antinous, whose relationship with the Roman emperor Hadrian was believed to have involved pederasty. Summers himself would go on to be accused of maintaining such relationships with young boys, although he would be acquitted in a court of law of these accusations. 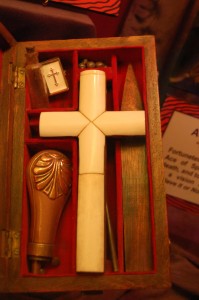 Despite the ill repute that Summers would become known for, these were hardly the most bizarre accusations made against the man, who would go on to also convert to Catholicism, even claiming to have been ordained a Catholic priest. Indeed, the eccentricity of Montague Summers extended well beyond a mere interest in the occult with titles such as the aforementioned thesis on Vampirism; he also worked as a devotee to the Gothic genre, translating such titles as The Castle of Otranto, The Malleus Maleficarum, and authoring works of his own devoted to the darker aspects of literature, such as his 1938 book The Gothic Quest: a History of the Gothic Novel.

The strangest thing, perhaps, about Summers' interest in vampires had dealt with his treatment of the subject as though vampirism were a very real condition. The Vampire dealt with not only accounts of biting ghosts and bloodsucking agents of the evening, but also the prescribed methods of dealing with such devils, which of course, became popularized in film (often with the use of such tools as those included with the vampire kit I described earlier). Based on his writings, Montague Summers either boasted a kind of eccentricity with his stylistic offerigs that blurred the lines between his treatment of fact and fiction, or he we must assume that he very much believed that the vampire was a real agent of evil, and one that must be dealt with through drastic means.

Was the quirky cleric indeed merely pulling our leg with his professed concern with denizens of the undead realm? Or do Summers' written works indeed point to the mind of a man who perhaps bought a bit too much of his own hype, resulting in a twisting of fact and fiction around what has become one of the chief staples of the horror genre in modern times?

Smiles of the Dangerous Children