UFOs, Noah’s Ark, and the Senator

Senator Barry Goldwater served as a Major-General in the Air Force, as the Republican Party’s nominee for President of the United States in the 1964 election, and as the Chairman of the U.S. Government’s Senate Intelligence Committee. On March 28, 1975, Goldwater wrote the following, highly thought-provoking words to a UFO researcher named Shlomo Arnon: “The subject of UFOs is one that has interested me for some long time. About ten or twelve years ago I made an effort to find out what was in the building at Wright-Patterson Air Force Base where the information is stored that has been collected by the Air Force, and I was understandably denied this request. It is still classified above Top Secret.”

Goldwater later clarified, and expanded on, this by revealing that years earlier none other than U.S. Air Force General Curtis Le May had given him, Goldwater, absolute hell for daring to ask if he could see the USAF’s top secret UFO data  rumored to be stored at Wright-Patterson – which many UFO researchers believe may possibly include preserved alien corpses and recovered extra-terrestrial hardware and technology. Moreover, Le May told Goldwater, in just about the sternest of all tones conceivably possible, not to even think about bringing up this matter with him again - ever.

But, this was not the only time when Goldwater approached officialdom on a matter of some secrecy and relative to an enigma that was of interest to the U.S. Intelligence community. The second such example, however, was linked with a definitive puzzle of biblical proportions: that of Noah's Ark, an issue that has fascinated and intrigued the CIA for years. 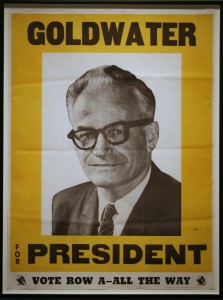 On September 1, 1978, Goldwater wrote a letter to the then-Director of the CIA, Stansfield Turner that began as follows: “You may think this is a screwball request and it may be, but I would like to know if you can do anything about it.” Goldwater went on to ask if “satellite photography” could be searched “to determine whether or not something in the way of an archaeological find might be located near or on top of” Mount Ararat.

Goldwater explained to the CIA director that he had received a letter “from a man in whom I have great confidence, who certainly is no nut, who knows Turkey rather well but who feels that there is reason to believe the Ark may be resting at or near the top of the mount. I assure that I will keep this at any classification you want it kept and if you desire me to go to the devil, I know the way.”

The CIA responded that it had no data on file suggesting the Ark of Noah had been identified or located anywhere on Mt. Ararat, or indeed anywhere else. Goldwater’s comment that he would understand if the Ark issue was of “any classification” that might result in the CIA telling him to “go to the devil,” however, is extremely - and eerily - reminiscent of that earlier experience with General Curtis Le May in the 1960s, in relation to the rumors concerning what may have been hidden deep below Wright-Patterson Air Force Base of a specifically alien nature.

If Goldwater – who had a deep, personal interest in UFOs - had even the slightest inklings or suspicions that official research into Noah’s Ark was somehow a matter of national security, rather than just a subject of religious or archaeological proportions, then this might very possibly explain why he anticipated being told to go to hell by the CIA in 1978, in much the same way that Le May had less than tactfully suggested to him years earlier in relation to rumors of captured UFOs held at Wright-Pat.

And why, precisely, might the CIA's interest in Noah's Ark be considered a matter having a bearing upon national security? Much more will be revealed this year...

Taken With the Night: UFO Abductions and the Human Factor