Exraterrestrial Atomic War: Evidence of a Nuclear Blast on Mars?

Perhaps no brand of weapon on Earth is feared as greatly as that which employs the power of the atom. Our early experiences as a civilization with nuclear weapons in times of conflict not only led to the end of the Second World War, but also to the frightening stalemate between emergent superpowers that persisted for decades afterward.

I must profess, I have been fascinated with atomic weaponry for some time now, both as a student of history, and with regard to how nuclear weapons have various tie-ins to the unexplained, fringe science, and alternative history. For instance, in the latest special issue of New Dawn Magazine, I discussed a subject I've featured here on this blog in the past as well: the notion that nuclear events may have occurred on Earth prior to the first test blast at Alamogordo toward the end of WWII. Some evidence even suggests blasts of this sort could have occurred as far back as several thousands of years ago.

And yet, there is at least some evidence that suggests how Planet Earth may not have been alone in this regard. So far as there being evidence of ancient historic nuclear events--a fairly difficult subject to accept at face value to begin with--could it actually be that evidence of this sort of thing may also exist on one of our nearby planetary neighbors? 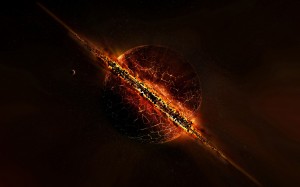 Earlier this year, Dr. John Brandenburg with Orbital Technologies Corp. went on the record discussing the potential for what he described as a "massive nuclear explosion on Mars," which curiously, "seems to defy natural explanation." Granted, while the circumstances that could have allowed such a thing to occur seem to defy rational explanation, this event is still considered to be "natural." (In fact, the same can be said of scientific interpretations regarding nuclear events believed to have occurred here on Earth long ago, specifically around the Great Lakes area, where evidence of some kind of nuclear event has been discovered, which dates back to Paleoindian times.) The problem with this "natural" interpretation, of course, is that while no scientist wants to commit to the possibility that some intelligence could have been behind such an "event," finding a plausible alternative explanation becomes damned difficult, just as well.

While a violent solar storm or supernovae appear to be likely candidates, there are alternative views that have been expressed, too. For instance, Joseph P. Farrell, an alternative historian and author of the new book Saucers, Swastikas and Psyops: A History of A Breakaway Civilization: Hidden Aerospace Technologies and Psychological Operations, has put forth his own views on the subject as follows on his website:

Make no mistake, there is evidence here on Earth that natural nuclear reactors formed and operated for a period of time long ago. But these are fission reactors and fission processes would be, to my mind, next to impossible to generate this amount of energy naturally. And fusion processes of this magnitude occurring naturally on a planet… well, that too, does not to my mind compute very easily.

If Brandenburg is correct, that all this is evidence of a gigantic thermonuclear explosion on the red planet aeons ago, then my bet is that it was the product both of technology and deliberate action, in short, it was the occurrence of an act of war.

How likely is it that an ancient nuclear blast might have occurred on Mars, and as a result of some intelligent species? Furthermore, could evidence of such things on Earth be an indication that there might be similar skeletons in the proverbial closet right here in our midst just as well? Or do anomalies of this sort truly have more plausible explanations... however difficult they may seem at the outset?

From Mormonism To UFOs