From Mormonism To UFOs

Joseph Smith, Jr., born on December 23, 1805, was the founder of the Latter Day Saint movement, more commonly known as Mormonism - which has been thrust into the limelight to a significant degree recently as a result of Mitt Romney, one of the Republican Party's nominees for President of the United States of America, being a supporter of this particular faith.

As for Joseph Smith, he began to develop a not-insubstantial following after he proclaimed that, beginning in the early 1820s, he had a number of encounters with an angelic entity named Moroni. So the story went, Moroni visited Smith (on some occasions while he, Smith, slept) and directed him to a book - inscribed on a set of golden plates - that supposedly detailed a visit of Jesus Christ to the Americas.

The book, we are told, was buried on a hill near Smith’s home (in Manchester, New York), which was variously referred to as Cumorah Hill and Mormon Hill. The same book was eventually translated and published under the title of the Book of Mormon. The Church of Jesus Christ of Latter Day Saints was duly born.

How curious that more than 120 years after Smith’s experience, a man named Truman Bethurum underwent a series of astonishingly similar encounters. His 1952 liaisons, however, were with alleged extraterrestrial entities - rather than an angelic one - and occurred atop the similarly-named Mormon Mesa, which is situated in Nevada. Just like Smith, Bethurum’s first encounter began when his sleep was disturbed by the sudden presence of a superior being – or beings, in Bethurum’s case. 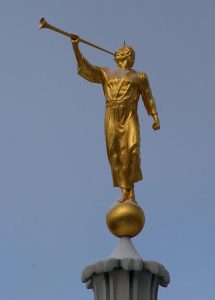 In a fashion not unlike the way in which Moroni told Smith that the priceless manuscript that ultimately became the Book of Mormon was “inscribed” on a set of golden plates, so on one occasion Bethurum was also the recipient of (to him, at least) a priceless inscription: the so-called Clarionites “dropped a small flare” near an old power line that skirted the hills northeast of Glendale that was intended for Bethurum’s attention.

On retrieving the flare, Bethurum said that close by was a foot-square package that had a four-word note inscribed on its outside: To Truman From Aura. "Aura" being "Aura Rhanes." According to Bethurum, she was the "captain" of the huge, gleaming flying saucer in which the aliens arrived.

In addition, an 1893 engraving by Edward Stevenson showing the angel Moroni delivering the plates to Smith atop Mormon Hill displays Moroni bathed in a brightly-glowing aura. Taking into consideration the clear similarities between the experiences of Smith and those of Bethurum and with Edward Stevenson’s brightly-shining image fixed firmly in our minds, one might be inclined to say that Bethurum’s Captain Aura Rhanes truly had an aura that reigned.

But there is a problem: despite the undeniable parallels between each story, Smith was told that his visitor was an angelic being named Moroni. Whereas, Aura Rhanes confidently assured the trusting Bethurum that she was an astronaut from a planet called Clarion. Someone was being highly economical with the truth. Or could there be another answer? Yes.

There is strong evidence that Bethurum most certainly did not meet aliens from a planet called Clarion. Rather, there is a substantial body of data suggesting his encounter was the result of something called Hypnagogia - a term that was coined in the 1800s by a French scholar named Alfred Maury.

However, it has a history that extends long before Maury came on the scene: references to this strange condition can be found in the writings of the Greek philosopher, Aristotle; in the works of the English Elizabethan occultist, astrologer and herbalist Simon Forman; and in the written output of the Italian renaissance mathematician and physician, Gerolamo Cardano.

So, with that said: precisely what is Hypnagogia? Basically, it is a term that describes the stage between wakefulness and sleep - a stage in the sleep process that may be dominated by a wide and infinitely varied body of sensory experiences.

For example, those in hypnagogic states have reported hearing voices ranging from barely-audible whispers to wild screams. Others have heard random snatches of speech – largely nonsensical, but occasionally containing unusual fictional names (not unlike some of those that appear in "close encounter" cases), and others have seen disembodied heads, or what appear to be fully-formed entities in their bedrooms. Humming, roaring, hissing, rushing and buzzing noises are also frequently reported by people experiencing hypnagogia.

Moving on, Truman Bethurum’s initial experience atop Mormon Mesa was initiated after he was groggily awoken by “what I can only describe as mumbling;” which is an absolutely classic facet of Hypnagogia. And, Joseph Smith's story includes accounts of his visitor appearing to him while he was in the sleep state and, of course, claiming a curious name - again, staple parts of the Hypnagogic state.

Aliens, angels, and a distinctly altered state of sleep-based proportions. To some degree they may all be interconnected. Keep that in mind if, late one night, you awaken groggily from your deep slumber and you see a strange, ethereal being in your room with messages of a profound nature. The entity before you may not be all that it appears to be...

The Secrets Plants Keep: Was Backster Right After All?