The Santorumsquatch: Was Bigfoot Spotted in a New Ron Paul Ad?

The last few months have been interesting ones for politics in the USA, to say the least. We've had presidential hopefuls like Newt Gingrich espousing the merits of lunar colonization, while a little more "behind the scenes" there have been the rather absurd claims that current President Barack Obama was part of a CIA program that sent him to Mars (for which, of course, the White House felt it was later necessary to claim denial).

Perhaps it could be chalked up to being a general disinterest in the present candidates among voters, though most of the odd flackery going on in the current political cycle actually stems from the candidates themselves. This is certainly the case in a new political ad put out by the Ron Paul camp, which delves into, of all things, a bit of cryptozoological imagery to help sell it's spin. 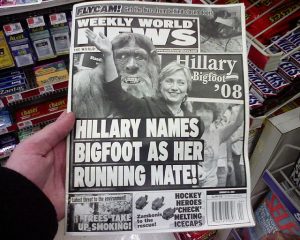 Though I had begun to think it couldn't really get any stranger than a moon base (something which, in principle, I would support myself, in the event that there were the legitimate economic fortitude necessary to support such a futuristic endeavor), the new Ron Paul ad criticizes his rival, Rick Santorum, on his fiscal conservatism... and then takes us straight into to Bigfoot country.

"Rick Santorum a fiscal conservative?" the ad asks, just before calling him a fake, and displaying a picture of the legendary Sasquatch holding a "FAKE" sign (the ad can be viewed by clicking here). While the desired effect was achieved, I can't help but wonder if the next ad won't keep a similar theme, but perhaps end with one of Billy Meier's famous trashcan-lid "saucers" hovering in the distance, dangling from clearly visible mono-filament attached to a fishing rod.

And speaking of the matter of UFOs, especially in relation to U.S. Presidencies, there are a host of strange and interesting connections that could be made here also. A few notable examples include:

These are just a few examples, and there are certainly plenty of others... enough, perhaps, to fill an entire book-length manuscript. At very least, it has served as enough fodder for keeping the folks over at PresidentialUFO.com busy digging up new material the last few months. But as for whether UFOs will become pivotal in the coming election (or any ad-based smear campaigns against potential candidates), that remains to be seen... while arguably, one might also say there is more credibility to reports of UFOs and Bigfoot than could be found in the political records of most of our politicians.

Mapping the UFO Enigma: If Not Extraterrestrials, Then What?