The Terror of the Wendigo

On the evening of July 30, 2008, a 22-year-old Canadian man named Tim McLean was killed and mutilated under truly horrific circumstances while on-board a Greyhound Canada bus as it neared Portage la Prairie, Manitoba. According to the shocked passengers, McLean was sleeping when suddenly, and without any warning whatsoever, the man next to him pulled out a large hunting-knife and began to wildly and viciously stab McLean in the chest and neck – no less than forty times, police were later able to graphically determine.

Needless to say, complete and utter pandemonium broke out on the bus, as people clambered to quickly escape. But far, far worse was to come. Several of the terrified passengers held the door of the vehicle firmly shut from the outside to prevent the man leaving the scene of the crime. As they did so, they were shocked to the absolute core to see that he had by now decapitated McLean and was calmly walking towards them down the aisle of the bus, with his victim’s head in his hand, no less.

"There was no rage in him. It was just like he was a robot or something," said Garnet Caton, one of the passengers aboard the bus. Royal Canadian Mounted Police quickly arrived on the scene and arrested the killer – who was identified as 40-year-old Vince Weiguang Li.

For most people, the incident was seen as just another further example of the overwhelming violence and rage that seems all too prevalent in today’s world and society; and particularly so when police revealed that Li had, apparently, even devoured some of his victim’s flesh while on the bus. As the investigation progressed, however, it moved away from being simply an infinitely violent crime, and took on decidedly ominous and almost paranormal overtones.

It transpired that a little more than a week before he killed McLean, Li had been delivering copies of the Edmonton Sun newspaper to homes in the area. Interestingly, the very issue in question contained an extensive article written by Andrew Hanon that profiled the work of a historian named Nathan Carlson, and his research into a monstrous beast known as the Wendigo. 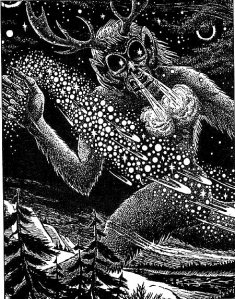 A creature that appears prominently within the mythology of the Algonquin people - the most populous and widespread of all the North American Native groups, with tribes originally numbering in the hundreds – the Wendigo is an evil, cannibalistic and rampaging creature into which humans have the ability to transform – particularly if they have engaged in cannibalism - or which are said to have the ability to possess human souls and minds to do their dark bidding. Notably, in centuries-past, those who were suspected by the Algonquin of being Wendigos were decapitated after death to prevent them rising from the grave.

In the wake of the terrible and tragic death of Tim McLean, Nathan Carlson noted that there were a number of similarities between Li’s actions and those of the Wendigo, and told the Edmonton Sun on August 11, 2008: "There are just too many parallels. I can’t say there’s definite connection, but there are just too many coincidences. It’s beyond eerie."

Eerie is without doubt the right word for what took place on that fateful evening in July 2008. And, while for many people this particular affair was perceived as being just yet another example of how our society is becoming ever more violent, some were of the opinion that matters extended into far stranger territories. For some,  this particularly notorious and savage incident was suggestive of the sensational possibility that Li himself had become a Wendigo.

Whatever ones own views on this admittedly curious case, it perhaps serves to demonstrate one thing more than any other: Even in today's fast-paced world, with our technological marvels, and our sprawling concrete cities, when circumstances dictate it, it does not take long at all before our minds swing back to the mysteries, mythologies, folklore, and paranormal-themed fears and superstitions of centuries, cultures and eras long gone.

The wild things, whether the stuff of reality, or of ingrained superstition and legend, are still very much among us...

Spying on the Saucer Writers