A Saucer at Sedona

Some 120 miles north of Phoenix, Arizona, in the northern Verde Valley, is Sedona, a small, tranquil city of barely 10,000 people that has become legendary in New Age circles for its enigmatic energies, vortexes, Native American legends of supernatural entities roaming the surrounding countryside, and much more of a paranormal and strange nature. Sedona is also home to the famous Red Rocks, large and stunning formations of sandstone that glow an eerie and captivating red and orange when the sun both rises and sets, and which add even further to Sedona’s reputation as a place of deep mystery and wonder.

And then there are Sedona's UFOs...

One incident that really stands out in the weird stakes occurred back in the summer of 1947, the details of which can be found in a formerly classified FBI file, now made available via the terms of the Freedom of Information Act.

According to the document of August 17, 1947 – titled Flying Disk, Sedona, Arizona – the witness (whose name has been excised from the file by FBI censors) was a former Second World War pilot who, after the hostilities came to an end in 1945, spent the next eighteen months working as a crop-duster in West Texas, before moving to Sedona, and securing employment in nearby Prescott.

It was while driving home late one weekday night - the man told the local sheriff’s office, who, in turn, contacted both the military and the FBI – that he caught sight of a large ball of blue light hanging low in the sky over one of the canyons of Sedona.

Naturally curious, the man brought his car to a halt at the side of the road, and watched, fascinated, as the glowing ball began to almost rhythmically sway, as if prodded or pushed by a gentle gust of wind. Fascination soon gave way to overpowering fear, however, when the ball quickly moved in his direction, possibly because, the man admitted to both an FBI special-agent from Phoenix and a representative of the Air Force, he had left his car’s headlights on and its engine running to ensure no-one slammed into the vehicle on the dark and lonely road.

“Mr. [Deleted] believes the lights of his vehicle attracted the ‘Flying Disc’ to his whereabouts,” recorded the FBI, in its three-page report on the affair. Within seconds, the strange object was directly over the car, at a height of no more than about fifty feet. It was at this point that the engine suddenly died, the headlights were extinguished – both by forces unknown - and the man found himself bathed in a light blue glow that, the FBI noted, “caused [the witness] to develop tingling in his fingers and lips.” 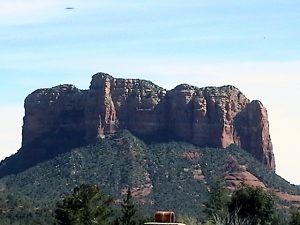 Likening the craft to a large “spinning-top,” the man told the authorities that as he gazed upwards, utterly awestruck, he suddenly developed the distinct thought that the craft was “flown by men from space who are watching us now there is an atom bomb,” and added to the interviewing agents that he believed “the space men are here to halt all future wars.”

Then, in an instant, the UFO was gone: it shot vertically in the sky to a height that the man – as an experienced pilot in the war and as a crop-duster – estimated to be around 600 or 700 feet, at which point “Mr. [Deleted] believes the light was turned off and [the] disk traveled in darkness in an unknown direction.”

This particular report is highly illuminating as countless people, all across the world, since the late 1940s, have claimed face to face contact with eerily human-like aliens from far-off planets who have expressed concerns about our growing atomic arsenals – just as the witness in this Sedona-based case of 1947 had suggested . The aliens in question are usually seen dressed in tight-fitting, one-piece-outfits, while sporting heads of lush, long and flowing blond hair.

Not only that: our cosmic visitors assure those of us who they deem worthy of contact that they are deeply concerned by our warlike ways. They wish us to disarm our nuclear arsenals, live in peace and harmony with one another, and elevate ourselves to whole new spiritual levels. The aliens in question have become known as the Space-Brothers; while those whose lives have been touched and forever changed by their encounters with such alleged extra-terrestrial entities are an elite body of people known as the Contactees.

If the testimony of the witnesses can be considered valid, then in the early years of contact the aliens took a decidedly alternative approach to their liaisons with the people of Earth; something which may explain why the military had such a hard time proving the reality of the UFO phenomenon.

Allegedly preferring face-to-face encounters with everyday members of society, the Space-Brothers arranged their clandestine meetings at such out-of-the-way locations as isolated hills, lonely mountains, and desert canyons, perhaps not at all unlike the one over which the UFO at Sedona in August 1947 was reportedly first seen hovering...