In his definitive book on the subject Explore Phantom Black Dogs, author and researcher Bob Trubshaw wrote thus: “The folklore of phantom black dogs is known throughout the British Isles. From the Black Shuck of East Anglia to the Mauthe Dhoog of the Isle of Man there are tales of huge spectral hounds ‘darker than the night sky’ with eyes ‘glowing red as burning coals.’ The phantom black dog of British and Irish folklore, which often forewarns of death, is part of a world-wide belief that dogs are sensitive to spirits and the approach of death, and keep watch over the dead and dying.”

And, during the summer of 2007, one of these most ancient and sinister beasts of folklore and the paranormal reared its ugly head in, of all places, the Lone Star State: Texas. On May 31, 2007, I received a mid-morning telephone call from a late-middle-aged woman named Ronda who lived in the city of Amarillo, deep in the heart of the Texas Panhandle.

“Are you the guy who writes about strange animals?” she asked, in somewhat wary tones. I told her that, yes, I was. And having done so, I sat back and listened to what she had to tell me. According to Ronda, only two days earlier, and with her daughter and son-in-law, she had traveled to a spectacularly beautiful, and huge, canyon a short journey from Amarillo called Palo Duro Canyon.

The trio trekked a mile or so into the canyon and found a pleasant place to sit that overlooked its vast, expansive depths. All seemed normal and Ronda and her daughter unpacked their picnic basket and duly set about preparing lunch. As they did so, Ronda told me, she developed a sudden and eerie feeling of being watched. For reasons that she was not really able to understand, Ronda quickly turned around and could see at a distance of a couple of hundred feet a large dark colored dog staring intently in her direction. 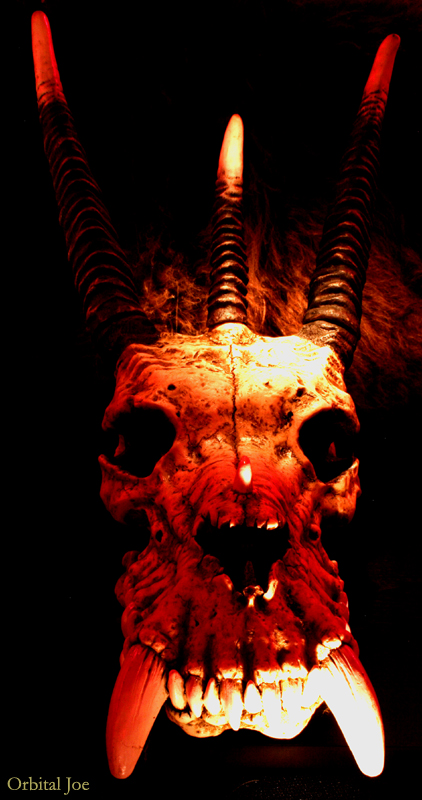 Ronda told me that at first the dog did not act in an exceptional manner: it merely stood its ground with its gaze fixed firmly in her direction. For almost a minute, Ronda estimated, the two exchanged looks, after which she felt uneasy and started to slowly turn her back on the beast. At that point, the dog’s demeanor changed drastically: it charged to within about fifty feet of Ronda, her terrified daughter and son-in-law, and viciously growled, barked and snapped its immense jaws in a fashion that was clearly confrontational in the extreme.

By now, with the benefit of seeing the animal at closer quarters, the three of them could see this was no normal dog. Ronda estimated that it was “half as large again” as a “big German Shepherd,” and its eyes shimmered and “seemed to glow silver: not like normal eyes.” But that was not all: on three occasions the dog, Ronda explained to me, seemed to “bounce” into the air “like it was on springs.”

I asked Ronda to clarify this point for me further and she explained that “it was like it jumped into the air about three feet, but with no effort from its legs. It just seemed to go up and drop down.” More bizarre: Ronda told me that at one point the animal seemed to briefly change shape into that of a “humongous black panther.”

Needless to say, the family scooped up its belongings and made its way along the trail that led back to their car. They continued to watch as the dog practically stalked them the entire way – that is, until they reached a certain point, whereupon the dog vanished – literally before their startled and terror-stricken eyes. There was no puff of smoke; no blinding flash: one second it was there, still glaring at them, and the next second “it just wasn’t there anymore.”

The phantom-like, fiend hound of times long gone, it seems, is not quite so long gone, after all...