From a Haunted Abbey to a Beastly Bridge

So-called Psychic-Questing books, like The Green Stone by Graham Phillips and Martin Keatman, and Andy Collins' books on the subject, such as The Black Alchemist and The Second Coming, have long fascinated me. But, it’s Keatman and Phillips’ sequel to The Green Stone – namely, The Eye of Fire – that particularly intrigues me, chiefly because of the terrifying tale it tells of a certain Ranton Abbey...

Known more correctly as the Augustinian Priory - Ranton Abbey, situated in the English county of Staffordshire - was founded by Robert Fitz-Noel during the reign of Henry Plantagenet, with the construction having been completed by 1150. In the early 19th century, the property became part of the estate of the Ansons of Shugborough, latterly the Earls of Lichfield. Today, the abbey is, unfortunately, in ruins, having been ravaged and destroyed during the Second World War, while occupied by Dutch soldiers. And, with that said: Onto the story.

While much of The Eye of Fire is far beyond the scope of this article, the data I wish to impart relates to a July 1982 trip to the abbey that the team of investigators in the book embarked upon, as part of their quest to locate the Eye of Fire of the book's title. Basically, the relevant parts of Philips and Keatman’s saga reveal how, in the 19th Century, one of the characters in the book, named Mary Heath, created a diabolical and monstrous "Guardian" at the abbey, whose role was to protect an ancient artifact, one that plays a vital role in the story. 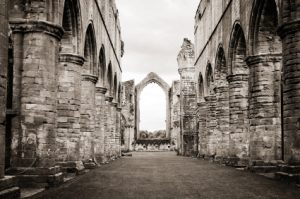 Interestingly, the "Guardian" is described in the book's pages in highly ominous tones, and, variously, as: "a complete blackness, seething within itself, shapeless but at the same time having substance;" as "an abomination;" and as a heavy-breathing "great beast."

The "Guardian," we come to learn, is a monstrous, protector-style thought-form - or Tulpa - brought into being, and roaming around, and protecting, the ancient abbey and the Eye of Fire. But there's more: The vile Tulpa was reportedly created by Mary Heath in 1875. How intriguing that an ominous thought-form was created in Ranton in 1875, considering that - only four years later, in 1879 - a horrific, "British Bigfoot"-type beast that became known as Man-Monkey was seen rampaging around the very nearby  Bridge 39 on the Shropshire Union Canal.

It was within the packed pages of Charlotte Sophia Burne’s book of 1883, Shropshire Folklore that the unholy antics of what some have since perceived to be the closest thing that Britain may have to the North American Bigfoot and the Yeti of the Himalayas, were first unleashed upon an unsuspecting general public. According to Burne:

"A very weird story of an encounter with an animal ghost arose of late years within my knowledge. On the 21st of January 1879, a labouring man was employed to take a cart of luggage from Ranton in Staffordshire to Woodcock, beyond Newport in Shropshire, for the ease of a party of visitors who were going from one house to another. He was late in coming back; his horse was tired, and could only crawl along at a foot’s pace, so that it was ten o’clock at night when he arrived at the place where the highroad crosses the Birmingham and Liverpool canal."

It was then, Burne faithfully recorded, that the man received what was undoubtedly the most terrifying shock of his entire life – before or since, it seems pretty safe to assume: "Just before he reached the canal bridge, a strange black creature with great white eyes sprang out of the plantation by the roadside and alighted on his horse’s back. He tried to push it off with his whip, but to his horror the whip went through the thing, and he dropped it on the ground in fright."

Needless to say, Burne added: "The poor, tired horse broke into a canter, and rushed onwards at full speed with the ghost still clinging to its back. How the creature at length vanished, the man hardly knew."

But the story was far from over, Burne learned: "He told his tale in the village of Woodseaves, a mile further on, and so effectively frightened the hearers that one man actually stayed with friends there all night, rather than cross the terrible bridge which lay between him and his home."

Could it be that Mary Heath's monstrous offspring and the Man-Monkey were one and the very same? Admittedly, this is a highly speculative and controversial question, but, it is a question I simply cannot bring myself to dismiss. Rather, I suspect, it may offer a convincing explanation for at least some of the strange beasts that have passed, and that continue to pass, for the enigmatic British Bigfoot.

Travel of the Tentacular Kind: Return of the Sky Squids!