Back in the 1960s, a photograph, said to date from the late 1800s, appeared in the pages of a popular newsstand magazine of the day – possibly True, Saga, or Argosy – and displayed the deceased remains of a gigantic, monstrous bird, pinned to a pair of barn-doors somewhere in rural North America – the exact location is, just like the picture itself, a matter of some debate.

Numerous researchers, investigators and authors of a whole range of anomalies claim, with absolute unswerving certainty, that they personally saw the priceless picture when it was published. The big problem, today, however, is that despite the fact that the pages of all the above-magazines, and many others too, have been carefully and dutifully scoured – even to the point of near-obsession – the picture cannot be found, anywhere at all. It’s almost as if it never even existed in the first place.

What was the alleged winged nightmare? Possibly nothing less than a legendary Thunderbird. And, if you're not acquainted with the phenomenon, I refer you to the words of my good friend - and fellow creature seeker and co-author with me on our Monsters of Texas book - Ken Gerhard, who says the following of the mighty, flying beasts:

"These creatures are likened to enormous eagles and are prominent in numerous, Native American folklores and totems. The name Thunderbird is derived from the sound that is apparently produced as a result of the thunderous beating of the mighty wings of the creature. Surprisingly, these mythological beasts are occasionally still reported flying around in our modern skies, and, incredibly, are described as having wingspans comparable to that of a small airplane." 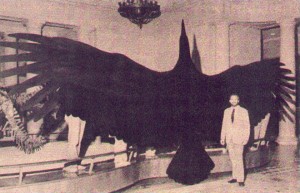 Like all authors, Ken and I wanted to ensure we had a good and varied selection of photos to accompany the text of the book. And that included, if possible, Thunderbird-themed imagery. But, we didn't want to simply go down the easy and lazy path of just pulling pictures from Wikipedia or somewhere similar, or using images that were well-known and/or well-used. So, the hunt was on for something relevant and new. But, it was no easy task. Or, rather, for a while it wasn't.

One afternoon, just a month or so before the book had to be submitted to the publisher, I was speaking on the phone with my dad, and he asked what I was up to. I told him that the writing of Monsters of Texas was coming to a close, but that we were having a hard time finding a Thunderbird photo. Given that my dad's interest in Cryptozoology is  not exactly huge, he almost flummoxed me when he said, words to the effect of: "I can send you a picture; I have an old painting of a Thunderbird in my garage."

This sounded almost too good to be true. Amazingly, it wasn't. Like all young men his age in the early 1950s, my dad had to serve three years of what was then called National Service (or, in the U.S., the Draft). But, his stint in the British Royal Air Force aside, my dad spent his working career as a carpenter. In the late 1970s, the company he was then working for secured a contract to rebuild and renovate 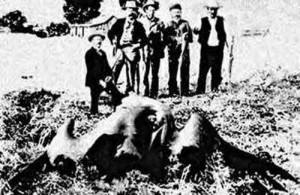 the lobbies of a well-known hotel chain in and around the London area.

When the work was completed, my dad and his colleagues were presented with gifts, as a sign of appreciation for the work. In my dad's case, his gift was a circular piece of stone, on which had been painted a brightly colored Thunderbird catching a fish. I vaguely remembered seeing this as a young teenager, but didn't realize the significance of it back then, and promptly forgot about it - chiefly because it was never on display in my parents' home, and apparently remained buried amongst a mass of stuff in the garage for decades.

So, my dad dug out the circle of stone, dusted it off, and took a picture of it for me - the very one that accompanies this article. But, there's something else, too. I find it very curious that while I was diligently searching - but ultimately failing - to find what I considered to be a good, previously unseen Thunderbird image for the book, I should finally get one from, of all people, my very own dad, all as a result of a chance conversation. Or, was it all down to chance? 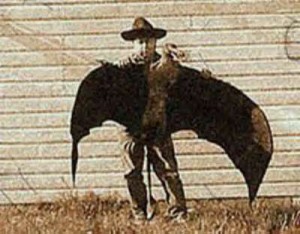 I am a big believer in the phenomenon of Synchronicities - so-called "meaningful coincidences" that appear to be the result of something stranger than mere random actions. And, I'm very inclined to place this affair into that same category.

And, of course, I can't ignore the fact that this represents two Thunderbird-connected photographs that seem to have distinctly Fortean overtones attached to them - one of which seemingly disappeared from the pages of one or more magazines years ago, and another that appears in Monsters of Texas! Maybe I should keep careful watch, just in case the latter picture starts to mysteriously disappear, too, from each and every copy of the book...

An Encounter of the Boomerang Kind