Located within California’s Mojave Desert, Death Valley is a most apt name for a place that resembles the rugged surface of some far away, battle-scarred planet and which holds the dubious honor of being home to the highest recorded temperature in the western world. An incredible 136° Fahrenheit, it was recorded on July 10, 1913, in the very appropriately named Furnace Creek.

It is somewhat ironic that, although Death Valley got its memorable moniker during the famous Gold Rush of 1849, only one death among all the prospectors eager to seek out gold was actually reported during that turbulent period. And although the name may be relatively new, the history of the area is most definitely not. For more than a thousand years the Timbisha Native Americans have lived in the harsh environs of Death Valley. And, in times both past and present, so have a whole range of things undeniably weird.

One of the strangest of all sagas relative to the mysteries of Death Valley erupted in the summer of 1947, the very same period in which the era of the Flying Saucer took the entire world by storm. In early August of that year, Howard E. Hill, of Los Angeles, spoke before the city’s Transportation Club and told a sensational story.

It was an extravagant tale that described the work of a certain Dr. F. Bruce Russell, a retired Cincinnati, Ohio physician, who claimed to have discovered, in 1931, a series of complex tunnels deep below Death Valley. Well, you may justifiably ask, so what?

[The images used in this post are used for illustration purposes only and are obviously photoshopped (except for the giant skull in the wheelbarrow, I took that one myself back in 1849) - MU] 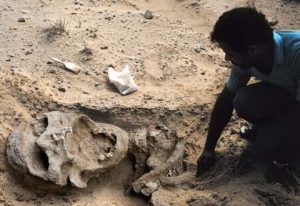 After all, caves, caverns and underground grottos exist all around the world. They most certainly do. But, there was something very special and unique about these particular tunnels beneath Death Valley. According to the story told to Hill by Russell, the caves contained the skeletons of several gigantic men, each in the region of around nine feet in height, which Russell stumbled upon with a colleague, Dr. Daniel S. Bovee, who Russell had worked with on archaeological excavations in Mexico several years earlier.

And “stumbled upon” is highly apt terminology. Russell reportedly fell headlong into one of the caves when the surface soil gave way beneath him as he was in the middle of busily sinking a shaft for a mining claim. In Hill’s own words, spoken before the amazed and hushed audience of the Transportation Club, he said:

“These giants are clothed in garments consisting of a medium length jacket and trousers extending slightly below the knees. The texture 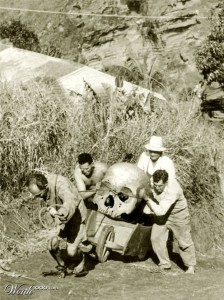 of the material is said to resemble gray dyed sheepskin, but obviously it was taken from an animal unknown today.”

Upping the weird stakes even further, Hill said that while deep underground Russell and Bovee apparently came across what they described as a “ritual hall,” in which were found unspecified devices adorned with markings “similar to those now used by the Masonic order.” More bizarrely, the long-dead remains of both tigers and elephants – or, as was later suggested, and which was certainly far more plausible, the remnants of ancient saber-tooth tigers and mammoths – were also found strewn across the floor of the huge hall.

As for this fantastic, below-surface realm, we’re not talking about just a few, measly tunnels either. Hill revealed that then current estimates suggested there were at least thirty-two of them, and they ran for an amazing 180 square miles, covering whole swathes of Death Valley and certain parts of southern Nevada.

As for the era in which the bodies originated, while no explanation was given as to how Russell had come up with such a figure, he estimated they extended back an incredible 80,000 years, if not even longer, Hill told the crowd.

Hardly surprisingly, the local media of the day loudly cited the comments of certain, unnamed “professional archaeologists” who openly scoffed at such a story, assuring anyone and everyone who would listen that the tale simply had to be that and nothing else at all: a tall story of April Fools’ Day proportions. 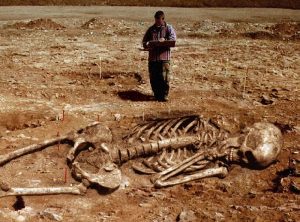 Rather incredibly, but some might say predictably, no-one in the professional world of archeology would even dare take up the challenge to see the incredible evidence for his or herself – possibly fearful of being viewed as gullible and lacking in credibility.

The result: it was left up to Howard E. Hill to continue to speak on behalf of Dr. Russell – which he certainly did, until the story died a mysterious death, and Hill, Russell and Bovee mysteriously vanished into the shadows (or, perhaps, into the depths of those old caves), never, ever to return....

Matters of Faith: Religious Relics and the Quest for Meaning