Those Who Linger in the Darkness: The Nonhumans Among Us

They go by many names... but whether people may choose to call them ghosts, shadow people, entities, or denizens of the darkness, few who have encountered them would argue that there is any question to their existence... whatever "they" may be. Quite simply, barring any errors in identification that may transpire, they could only be considered "nonhumans" in our midst.

While the conventional model of what a "ghost" is supposed to be might lead some to categorize them more appropriately as "post-human entities" or something similar, the general idea that there are semi or altogether nonphysical "personages" in our midst has always been both intriguing and terrifying to us. And yet, reports of such high-strangeness encounters do seem to occur from time to time, with beings that seem to defy any kind of rational explanation. 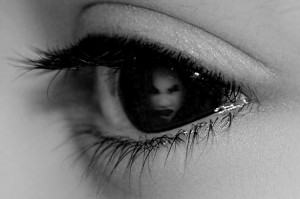 A good example appeared in Roger Marsh's UFO Examiner column recently, detailing a report with what could very easily be likened to a "Shadow Person" encounter that took place on a woman's back porch in Tennessee. The witness described seeing a "human-shaped solid black, very dark black, being was standing on the other side of my deck. It was turned towards the field, leaning on the railings, and seemed to be looking into the field." Once the "thing" turned to observe her, the woman claimed it backed away slowly, reminiscent of a cat stalking its prey, and disapeared behind the side of her house. It reportedly then appeared again, and peered at her from around the corner of the house, at which time the witness claimed she felt "threatened" by the strange manifestation.

Indeed, this odd tale fits well into the mythos surrounding Shadow People, which are a fairly recent phenomenon as recognized by this name. Some of the best among modern "classic" stories regarding these beings stem from Art Bell's tenure as host of the late night radio program Coast to Coast AM, where Bell featured the subject quite often, along with listener stories (you can hear some of those stories by clicking here).

Then there are the reports of odd beings that, while not manifesting from the shadow's very essences themselves, nonetheless tend to linger among the twilight realm, bathed in the darkness by cover of night. One man, who identified himself as "Roger," recently shared a very strange story with me. To set the stage, he and some friends had been hanging around near a wooded area back in the summer of 1970. They had been drinking wine, and around dusk finally decided to leave the area. Then, as he and a friend named Terry were heading toward their car, parked along an unpaved road adjacent to a field, a strange figure emerged:

This thing looked like someone had concreted a very, very large man in a diving suit, bell helmet and all and contoured the head into the shoulders as if there were no neck, no facial features...only smooth grey (lavendar tinted from a nearby guard light)...a light, monochromatic color overall.
It stopped as if it had became aware of us and from where it stood; not yet reaching the driveway level in its course, it appeared that I was only looking at the thing from the waist up - almost 1/3 as tall as the 15 foot tree next to the trail and at least 3 feet across at the shoulders. The thing appeared to be potentially some 10 feet tall.
I froze where I was for a very brief moment and when I looked at Terry, he looked at me and I knew he had seen and was looking at what I was seeing. Two  cars could pass each other on this driveway and that was much too close to whatever that thing was for comfort and we bolted simultaneously for the car, which Bob had kept running. He hadn't seen a thing. We drove away and never looked back - and lived to regret it.
Terry and I have talked about this incident many times and we'll never know what that thing was; but, the only description I've had for it all these years is Golem -a mud man - because that's exactly what it looked like - an enormous clay-like figure rising up from the dark before us - featureless, massive and unlike anything I've ever seen since that night.

What was the odd "being" Terry and Roger saw that evening in 1970? Unlike the popular reports of "Shadow People," this nonhuman thing seemed quite physical, and indeed, it's description was similar to the statuesque Golems of Jewish legend. Roger also likened this creature to being similar to descriptions of the "beings" aboard the UFO craft that abducted Charles Hickson and Calvin Parker back in 1973 near Pascagoula, Mississippi. So was this "Golem" of earthly origin, or was it something else?
Have you ever had similar experiences with entities that weren't quite human... or may have even seemed only semi-physical like the frightening reports of "Shadow People" and other ethereal entities of the night? If so, we'd love to hear about them... feel free to share your stories in the comments section below, or you can also email me at [email protected].

From a Haunted Abbey to a Beastly Bridge