Super-Soldiers: How Soon Will We See “Functional Psy” on the Battlefield?

As far back as World War II, the Soviets had been experimenting with the idea of creating super-soldiers by using hypothetical inter-specific breeding processes to unite the genes of humans and chimpanzees. The resulting "humanzees" would provide field-ready super-humans that were stronger than the average man, and likely less susceptible to discomfort from pain, temperature, or other environmental stimuli, as well as the dissatisfaction from the quality of food they were given.

As time passes, some things do indeed change... but old ideas tend to die hard. Thus, while interbreeding humans with monkeys to create a hybrid may not (or, for all we know, may still) be an objective, one thing is certainly clear: the utilization of technology to "breed" different varieties of super-soldiers remains a reality. And within the next few years, some agencies are already talking about implementing this sort of advanced science on the battlefield.

A report featured in the British Daily Mail Online discussed the Pentagon's plans for designing functional "telepathy" that would allow soldiers on the battlefield to communicate using keywords and phrases in combat. This, of course, would allow for a variety of benefits that include less equipment needed in the field, as well as a better ability to contain secret command communications (whereas technology like radio and internet transmissions can be spied on more easily).

According to the Daily Mail article the project is

"Based largely out of University of California-Irvine, in conjunction with labs in Philadelphia and Maryland, (where) scientists are trying to improve so-called 'synthetic telepathy' so that it could be used in a battlefield.

At this point, they have set their sights on 2017 as the year when their plan may turn into silent action. So far, 45 per cent of the commands that are transmitted from one volunteer to another- like 'call in helicopter' or 'enemy ahead'- are correct. 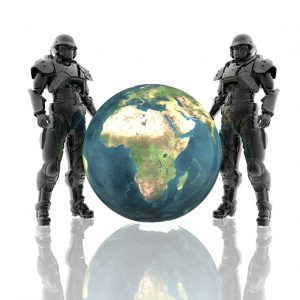 Then again, there is an obvious down side to all of this, of course. While the benefits of utilizing non-verbal, distance communication in combat situations is of merit, there are also concerns over how, precisely, such functional "telepathy" could be achieved. Would the technology in question, for instance, allow people to read the thoughts of others while off the battle field as well? This would likely present an entire range of potential issues regarding individual right to privacy, etc.

And yet, many futurologists predict that there is a great likelihood for the implementation of psy-tech in the coming years. In fact, the trend seems to be that this sort of technology will not only become a likelihood, but that it may indeed become inevitable. For proponents of the idea that mankind has somehow slowly managed, over time, to disassociate itself from some degree of innate psychic ability, maybe things will eventually come full circle on that front. Except now, instead of having a natural ability to harness precognition, we'll take on such abilities through the implementation of technology... what are your thoughts on this, and are we headed in the right direction, or are there more frightening potentials here than most have stopped to consider?