Located just outside of central London, England is a large and impressive building known as the National Archives. It serves as a repository for declassified and still-classified files from the British Royal Air Force, Royal Navy, Army and the British equivalents of the FBI, CIA, Department of Defense and National Security Agency.

As might be expected, the bulk of the records that the British Government has released into the public domain via the passing of its Freedom of Information Act – and that are now available for scrutiny by the public - focus upon such matters as Cold War activities, espionage, the Second World War, and the routine, day-to-day work of governmental bodies.

But, as well as the strictly down-to-earth material, intriguing files have surfaced demonstrating that, during the 19th Century, elements of British officialdom took a deep and keen interest in sightings on the high-seas of nothing less than fully-fledged sea serpents! 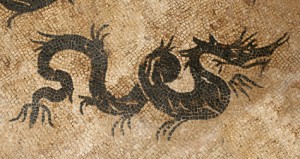 One of the most notable reports of an encounter with such a beast can be found within the archives of the Admiralty. The documentation at issue details the remarkable encounter with a sea-serpent that was seen on May 9, 1830 by the crew of the Rob Roy: a British Royal Navy ship that was homeward bound after a lengthy sea-journey across the Atlantic Ocean. As the ship sailed by the island of St. Helena, something remarkable occurred, as the Rob Roy’s captain, James Stockdale, recorded in his official log the following:

“About five p.m. all at once while I was walking on the poop my attention was drawn to the water on the port bow by a scuffling noise. Likewise all the watch on deck were drawn to it. Judge my amazement when what should stare us all in the face as if not knowing whether to come over the deck or to go around the stern – but the great big sea snake! Now I have heard of the fellow before – and I have killed snakes twenty-four feet long in the straits of Malacca, but they would go in his mouth.

“I think he must have been asleep for we were going along very softly two knots an hour, and he seemed as much alarmed as we were – and all taken aback for about fifteen seconds. But he soon was underway and, when fairly off, his head was square with our topsail and his tail was square with the foremast.”

Captain Stockdale continued: “My ship is 171 feet long overall – and the foremast is 42 feet from the stern which would make the monster about 129 feet long. If I had not seen it I could not have believed it but there was no mistake or doubt of its length – for the brute was so close I could even smell his nasty fishy smell.

“When underway he carried his head about six feet out of water – with a fin between the shoulders about two feet long. I think he was swimming about five miles an hour – for I watched him from the topsail yard till I lost sight of him in about fifty minutes. I hope never to see him more. It is enough to frighten the strong at heart.”

A second report of a sea-monster sighting has been declassified at an official level by the British Government and describes an extraordinary December 13, 1857 encounter that also occurred in the vicinity of the island of St. Helena. A 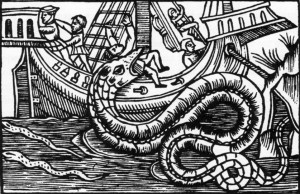 “While myself and officers were standing on the lee side of the poop – looking toward the island – we were startled by the sight of a huge marine animal which reared its head out of the water within twenty yards of the ship – when it suddenly disappeared for about half a minute and then made a reappearance in the same manner again – showing us its neck and head about ten or twenty feet out of the water.

“Its head was shaped like a long buoy – and I should suppose the diameter to have been seven or eight feet in the largest part with a kind of scroll or ruff encircling it about two feet from the top. The water was discolored for several hundred feet from the head, so much so that on its first appearance my impression was that the ship was in broken waters, produced, as I supposed, by some volcanic agency, since I passed the island before.”

And Captain Harrington had far more to impart:

“But the second appearance completely dispelled those fears and assured us that it was a monster of extraordinary length and appeared to be moving slowly towards the land. The ship was going too fast to enable us to reach the masthead in time to form a correct estimate of this extreme length – but from what we saw from the deck we conclude that he must have been over two hundred feet long. The Boatswain and several of the crew, who observed it from the forecastle, state that it was more than double the length of the ship, in which case it must have been five hundred feet.”

The captain concluded in his official report: “I am convinced that it belonged to the serpent tribe.”

Of that, there seems little doubt!