They Might Be Zombies: Strange “Nodding Disease” Zombifies Children in Uganda

World Health Organization officials are baffled as to the specific cause of a strange and terrifying new medical condition, known to exist since 2009, which has begun to afflict children in parts of Uganda. While some of the symptoms involve children falling asleep and passing out under bizarre circumstances (such as sudden weather changes or exposure to exotic foods), many of the conditions that accompany the onset of "nodding disease" are far more troubling, in that they remind us of popular depictions of zombies on the silver screen.

Some reports out of Uganda have described mothers having to tie their children down when they leave their homes, for fear that their children will wander away mindlessly, occasionally becoming lost in thickets and underbrush. In other incidents, the afflicted youngsters have shown the curious propensity for starting fires, contributing to a baffling set of circumstances for which, to date, there is no known cause or solution.

Nodding disease has already been compared to a number of similar conditions, including a variety of "river sickness" known to exist in the region for a number of years that can cause the onset of blindness. However, perhaps the most peculiar aspect associated with the nodding disease is that in nearly all cases, the children affected are between the ages of five and fifteen.

Please note some readers may find the following images distressing. 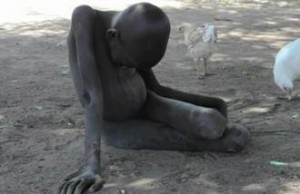 Among the various conditions that appear with the onset of nodding disease are also stunted growth, as well as seizures reminiscent of epilepsy; with regard to the latter, some epilepsy medications have garnered results in treating the condition, although the effects tend to be mostly offsetting, rather than capable of a full recovery.

The zombie-like effects were made most apparent in a recent article by the British Daily Mail, which described the plight of one mother and her family as follows:

(Grace) Lagat now has to tie up her children when she leaves the house to stop them from disappearing.

She told the TV station:'When I am going to the garden, I tie them with cloth.

'If I don't tie them I come back and find that they have disappeared.'

Almost immediately, the conditions described here begin to remind us of films such as Danny Boyles' 28 Days Later and its sequel, 28 Weeks Later, both of which feature a strange virus known as "rage" that causes those affected to literally become bloodthirsty zombies. Of particular concern is the mention of such children mindlessly starting fires in their homes, as with such behavior the more obvious dangers associated with this alleged Ugandan "zombie" disease become frighteningly apparent.

As to what the actual cause may be, one can only guess. However, there are a few things that are indeed interesting to note about the apparent affects of this mystery illness. For one, the disease has been reported in children as young 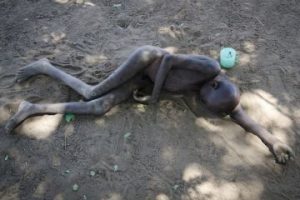 as three years of age, with reported cases declining after age fifteen (reports of nineteen-year-old victims do exist, however). If the 3 to 5 year age group is indeed a reasonable "gateway" demographic as far as this illness is concerned, we might consider what kinds of environmental circumstances would be most prevalent in conjunction with children around this time in their lives. Rather obviously, the weaker natural immunities of the children at this age may come into play, but it is also curious to note that this youngest age group also represents those who have only recently begun walking. Could the fact that the disease mostly strikes young children learning to walk--or even older ones who are more susceptible to contagions by virtue of their age--be a factor worthy of consideration here?

The strange and frightening effects of the so-called Ugandan "nodding sickness" remain puzzling to experts... what kind of agent could possibly be the cause behind this strange and damaging condition?