A Strange Tale of the MIB

Well, with Men in Black 3 finally among us, I figured that now would be the time to share with you a very weird story of definitive MIB proportions, which was brought to my attention in September of last year by a woman named Marjorie Braxton. Her curious and sensational story told of an event that her grandfather was reportedly involved in – back in the 1950s – while visiting the State Department. Truly, it is one of definitive Men in Black proportions. In other words, it’s manifestly bizarre…

“Hello, Mr. Redfern. My name is Marjorie Braxton. Last night I finished reading your newest – The Real Men in Black. Thank you for giving me nightmares LOL! But to be serious, congratulations on the book and I thought you might be interested in the following story of my late grandfather, who had his own MIB sighting in 1955. Grandfather was into science-fiction and shared it with David Grinnell at the time, and was published somewhere in UFO fandom. But I have grandfather’s original notes - - that would be the full notes - - and have copied some of them here for you. If you ever find anything more on this could you let me know? It’s yours to publish if you wish. With kindest regards, Marjorie, a fan.” 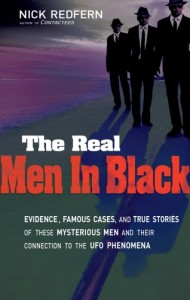 And here is the text of the curious communication of Marjorie Braxton's grandfather, in his very own words, as provided to me by Marjorie herself:

“I cannot say whether I am the victim of a very ingenious jest on the part of some of my wackier friends or whether I am just someone accidentally ‘in’ in some top-secret business. But it happened, and it happened to me personally, while visiting Washington recently, just rubber-necking, you know, looking at the Capitol and the rest of the big white buildings.

“It was summer, fairly hot. Congress was not in session, nothing much was doing, most people vacationing. I was that day aiming to pay a visit to the State Department, not knowing that I couldn’t, for there was nothing public to see there unless it’s the imposing and rather martial lobby (it used to be the War Department building, I’m told). This I did not find out until I had blithely walked up the marble steps to the entrance, passed the big bronze doors, and wandered about in the huge lobby, wherein a small number of people, doubtless on important business, were passing in and out.

“A guard, sitting near the elevators, made as if to start in my direction to find out whom and what the deuce I wanted, when one of the elevators came down and a group of men hustled out. There were two men, evidently State Department escorts, neatly clad in gray double-breasted suits, with three other men walking with them. The three men struck me as a little odd; they wore long black cloaks, big slouch hats with wide brims pulled down over their faces, and carried portfolios. They looked for all the world like cartoon representations of cloak-and-dagger spies. I supposed that they were some sort of foreign diplomats and, as they were coming directly toward me, stood my ground, determined to see who they were.

“The floor was marble and highly polished. One of the men nearing me suddenly seemed to lose his balance. He slipped: his feet shot out from under him, and he fell. His portfolio slid directly at my feet.

“Being closest to him, I scooped up the folio and was the first to help raise him to his feet. Grasping his arm, I hoisted him from the floor – he seemed to be astonishingly weak in the legs; I felt almost that he was about to topple again. His companions stood about rather flustered, helplessly, their faces curiously impassive. And though the man I helped must have received a severe jolt, his face never altered expression.

“Just then the two State Department men recovered their own poise, rushed about, and, getting between me and the man I had rescued, rudely brushed me aside, and rushed their party to the door.

“Now what bothers me is not the impression I got that the arm beneath that man’s sleeve was curiously woolly, as if he had a fur coat underneath the cloak (and this in a Washington summer!), and it’s not the impression that he was wearing a mask (the elastic band of which I distinctly remember seeing amidst the kinky, red, close-cropped hair of his head). No, it’s not that at all, which might be momentarily misconstructions on my part. It’s the coin that I picked up off the floor where he’d dropped his portfolio.

“I’ve searched through every stamp and coin catalogue I can find or borrow, and I’ve made inquiries of a dozen language teachers and professors, and nobody can identify that coin or the lettering around its circumference.

“It’s about the size of a quarter, silvery, very light in weight, but also very hard. Besides the lettering on it, which even the Bible Society, which knows a thousand languages and dialects, cannot decipher, there is a picture on one side and a symbol on the other.

“The picture is the face of a man, but a man with very curiously wolfish features: sharp canine teeth parted in what could be called a smile; a flattened, broad, and somewhat protruding nose, more like a pug dog’s muzzle; sharp, widely spaced vulpine eyes; and definitely hairy and pointed ears.

“The symbol on the other side is a circle with latitude and longitude lines on it. Flanking the circle, one on each side, are two crescent-shaped moons.

“I wish I knew just how far those New Mexico rocket experiments have actually gone.”

And there the curious report ends. Bizarre, indeed! But, when it comes to a phenomenon so strange as the Men in Black, we should, perhaps, not expect anything less!

Beyond Mere Thoughts: Strange Connections Beyond Time and Space