Adamski and the Occult

I'm very often asked words to the effect of: What evidence did the Collins Elite (the clandestine think-tank group in the U.S. Government whose activities are the subject of my Final Events book) find to support their highly controversial idea that the UFO phenomenon is demonic in origin? Well, as far as can be ascertained, they didn't find any evidence.

Rather, they developed a vast body of beliefs relative to such matters - which is what often happens in paranormal-themed situations when hard evidence fails to materialize and the researcher either becomes frustrated by the quest for the truth, or has an emotional need to gravitate to one idea or another, something which often results from weakness and insecurity, or an arrogant and ego-driven conclusion that one is right, despite being unable to prove it.

But, that's not to say the Collins Elite didn't uncover a wealth of intriguing threads that they wove together into an extraordinary scenario. They most certainly did. One of them relates to none other than a certain George Adamski. Born in Poland in 1891, Adamski had the distinction of being the most supported, celebrated, and ridiculed of those who claimed direct contact with human-like extraterrestrials in the 1950s.

The controversy largely began on November 20, 1952, when Adamski claimed that he witnessed, along with six other people, the landing of a UFO in the Californian desert and then made contact with its pilot, one Orthon of the planet Venus. 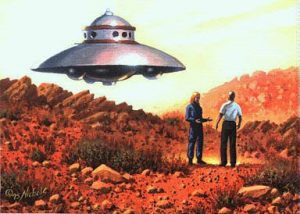 FBI documentation of 1953 on Adamski’s claimed encounter with the extraterrestrial Orthon states:

"At a point ten and two-tenths miles from Desert Center on the road to Parker and Needles, Arizona, Adamski made contact with a space craft and had talked to a space man. Adamski stated that he, [deleted] and his wife Mary had been out in the desert and that he and the persons with him had seen the craft come down to the earth. Adamski stated that a small stairway in the bottom of the craft, which appeared to be a round disc, opened and a space man came down the steps. Adamski stated he believed there were other space men in the ship because the ship appeared translucent and could see the shadows of the space men."

The alien that allegedly confronted Adamski, the FBI noted, was "over five feet in height, having long hair like a woman’s and garbed in a suit similar to the space suits or web suits worn by the US Air Force men." (The image to the left is a scan of one of the many pages contained within the FBI's dossier on Adamski). 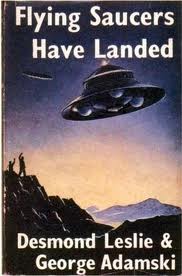 This was a story greatly expanded upon in a 1953 book entitled Flying Saucers Have Landed that Adamski wrote with an Irish aristocrat named Desmond Leslie. It was this Adamski-Leslie connection that got the members of the Collins Elite all worked up and bent out of shape. One of the former Collins Elite staffers told me that the group quickly became concerned by the working relationship that existed between Adamski and Leslie, and for one very stark and eye-opening reason: Desmond Leslie had a long and rich link to the world of the occult, including - in a roundabout way - Aleister Crowley himself.

As Dr. David Clarke and Andy Roberts note in their book, Flying Saucerers, Leslie’s father, Sir Shane (who was a second cousin to British Prime Minister Winston Churchill) was a truly colorful character. Indeed, he caused a sensation by converting to Roman Catholicism and the Nationalist cause. In addition, he spent part of his early years in Russia, where he became friends with Leo Tolstoy, before traveling across Europe.

It was during these travels that Sir Shane became obsessed with the world of the supernatural, which led him to carefully collect stories for his Shane Leslie's Ghost Book, published in 1955. Sir Shane’s closest friends at this time included the acclaimed paranormal novelist M.R. James and the eccentric Lord Tredegar, who dabbled in the black arts, under the influence of Aleister Crowley’s teachings, at his country estate in Wales.

So Desmond Leslie was, in a roundabout and convoluted fashion, someone who had been exposed to the occult and the teachings of Crowley. Just like rocket scientist and Crowley devotee Jack Parsons - another character whose 1940s/early 1950s actions greatly troubled the Collins Elite. And that Leslie was digging into the world of Flying Saucers with George Adamski only troubled them even more and amplified their beliefs that the UFO phenomenon was/is demonic.

Unconnected threads that happened to occasionally cross paths, or evidence that the Collins Elite members were correct? In  the absence of evidence one way or the other, it all comes down to belief and interpretation of the data and facts.

A Strange Tale of the MIB