What is it about the artistic mind that seems to allow the more remote and esoteric aspects of existence to shimmer through the cracks in our reality? Far more often than not, it seems that individuals who are gifted in the arts claim to be more spiritual and—to put it bluntly—psychically attuned.

Countless numbers of individuals have claimed to be both progenitors of the arts, in addition to being at least mildly "in touch" with spiritual essences that are not immediately made available to the average person. But is this really a gift that many artists seem to have, or is it just the result of the creative aspects underlying the minds of such personalities taking charge, and thus creating the sometimes-convincing impression of being gifted with special abilities?

While there are indeed studies that are well known already linking musical abilities with increased success in various other cognitive activities, a different kind of study was recently brought to my attention by good friend Thomas Cameron, a martial arts instructor and colleague of mine based out of Chicago. Tom had begun a recent correspondence with me by posing similar questions, and then began to posit theories regarding level of artistic or musical ability in relation to extra-sensory gifts. Then he mentioned a study that seemed, at least peripherally, to lend some justification to why, precisely, this might be. The process of the study, according to Cameron, was as follows: 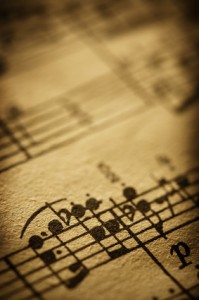 Several tracts of garbled speech were recorded one over the top of the other, with one single track of speech containing brief non sequitur phrases. The recording was then played to a wide variety of people to see if there was any one group of people that had greater acuity at discerning the non sequitur phrases from the other gibberish. The study's results showed that those people who have had musical training or had musical skill were able to not only make out that the phrases existed, but were able to accurately discern what the phrases actually said. I can't help but think this study may be in some way impactful with regard to those people with psychic gifts who "hear" information from unseen sources. Perhaps in the same way that those who had musical skill were able to differentiate between legitimate phrases and garbled noise, psychics are able to differentiate between coherent information and "psychic white noise".

But in an even more literal sense than that which Cameron relates here, it seems that those who fared best in the study described above were musicians; in other words, they had apparently been best equipped physically for the task of making out the phrases amidst garbled gibberish. This reminds me a bit of some of psychic Robert Cracknell’s determinations about his own abilities, as well as those possessed by others claiming to be psychic; in essence, Cracknell has argued that much of what constitutes “psychic” ability stems from a general physical sensitivity a minority of individuals may possess naturally or have developed over time. In terms of the latter case, it seems to be a generally accepted theme among psychic studies that virtually anybody should be capable of learning to harness such talents, in the event that they choose to go about it rightly. And of course, many of the processes underlying the attainment of presumed “psychic” abilities involve the use of such things as frequent meditation and other esoteric practices. Not to generalize here, but again, we find the processes used for obtaining psychic abilities are most often spiritual in nature, and thus things that, arguably, more artists, musicians, and generally creative people will gravitate toward.

In the end, perhaps it’s really just a case of which came first: the psychic chicken, or the cosmic egg itself, which holds the answer to riddles such as psychic phenomenon in the first place. Without one, we may not be able to fully understand the other; much the same, whether people with innate psychic abilities gravitate toward the arts, or study of the arts themselves are the impetus behind such clandestine talents, we may not be capable of discerning… for now, at least.