Ginger Snaps: Are People with Red Hair More Sensitive to the Paranormal?

Among the quite colorful theories and quips proposed by American author Mark Twain, Huckleberry Finn's creator also was known to have guessed about the origins of of humankind's most admired and often-stereotyped recessive trait. "While the rest of the species is descended from apes," Twain wrote, "redheads are descended from cats."

Indeed, there are an entire host of traditions that involve superstitions associated with redheads (and cats too, for that matter). Red haired individuals comprise less than two percent of the population worldwide, making them the rarest natural hair color among humans. Though we still manage to see red hair quite often despite these percentages--perhaps due in part to the accessibility provided through cosmetic hair dyes--the trait is uncommon enough that odd misconceptions do still crop up from time to time in modern times. Consider, for instance, the popular story that made rounds in 2007, claiming that redheads would become extinct within the next century.

But what is the likelihood, if any exists, that at least some superstitions involving redheads may actually have some factual basis? More specifically, could there be any evidence to support various legends involving the strange paranormal connections red haired people seem to maintain?

"In Greek myth," it is said, "redheads turned into vampires after they died." Others have claimed throughout the ages (in the pejorative sense, though largely tongue-in-cheek) that redheads may likely be vampires from birth. It cannot be denied, however, that due to the rarity of red hair among various cultures, the trait has seen both good and ill reception. This certainly has been associated with vampires and various other creatures of the night as well, and not merely among the Greeks. The self-proclaimed vampire hunter Montague Summers wrote in his translation of the Malleus Maleficarum that:

Those whose hair is red, of a certain peculiar shade, are unmistakably vampires. It is significant that in ancient Egypt, as Manetho tells us, human sacrifices were offered at the grave of Osiris, and the victims were red-haired men who were burned, their ashes being scattered far and wide by winnowing-fans. It is held by some authorities that this was done to fertilize the fields and produce a bounteous harvest, red-hair symbolizing the golden wealth of the corn. But these men were called Typhonians, and were representatives not of Osiris but of his evil rival Typhon, whose hair was red.

Red hair has often been stereotyped for being associated with sexual desire, bad temperament, and immoral activity. Aristotle was said to have expressed his similar feeling that redheads were "emotionally un-housebroken." With little doubt, these sorts of myths were the obvious byproduct of the redhead presence among the cultural minorities; recognition of this aspect alone, however, would do little to qualm the superstitions that have persistently haunted those with red hair and fair skin. Even today, there are still a number of beliefs associated with red haired individuals, among them that gingers may have a greater propensity for harnessing things such as psychic abilities. 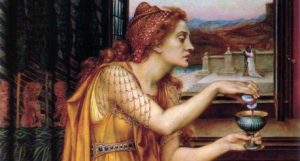 I discussed this recently with my friend Marti Marfia, a natural redhead, who had expressed that she, along with most other redheads she had known throughout her life, had claimed to have at least some ability to use such things as intuition. Having encountered stories that were remarkably similar to her own experiences along these lines, Marti began to research the possibility that there might be other stories like hers, or perhaps whether studies might exist that had to do with reasons for such things. Interestingly, at least two studies appear to show a link between red hair and tolerance for pain; this likely results from the fact that redheads have a mutated MC1R gene, and thus an MC1R receptor that is the similar byproduct of rare genetic mutation. These factors my also contribute to the need for larger amounts of anesthesia for redheads undergoing surgery.

In terms of how red hair actually developed among early humans, it is believed that having pale skin may have been advantageous in far-northern climates, and that in the absence of regular sunlight, lighter colored hair--which is typically paired with lighter skin color as well--would have been more conducive to absorbing and maintaining heat. Based on this observation, a 1976 study suggested that the underlying process likely may have to do with higher levels of Vitamin D production, granting redheads a natural ability to ward off conditions such as rickets that stem largely from vitamin deficiencies.

Altogether, what cannot be denied here is that redheads certainly do, without question, operate a bit different from the rest of us, based on their special (and slightly curious) natural physiology.  Could it be that such factors might contribute to a sense of heightened awareness that some redheads claim to sense, or even that such factors might cause them to be likely candidates for experiencing psychic phenomena?

The Riddle of the Missouri Mystery Mound