Most of us are familiar with stories of Nessie, the long-necked lady of Loch Ness in the Scottish Highlands. For centuries, it has been believed that a strange, dinosaur-like animal has existed within the lake's murky waters, though granted, the waters of the famous lake are so filled with peat that it would make peering through a glass of Guinness far easier; in other words, visibility is very limited beneath the Loch. Thus, numerous attempts to prove the identity of the lake's mystery monster have come up empty-handed.

There have been, on occasion, a variety of different "hits" with regard to the use of sonar, which seem to indicate at times that there may have been large animals within the Loch. Limited photographic evidence exists also, though the image long held to be the most famous to depict the monster, known as the "Surgeon's Photograph", was later proven to be a hoax. Despite much of the evidence constituting belief in a monster that resides at Loch Ness being revealed as fabricated, there are still many researchers who take the mystery very seriously, and while grasping for evidence and a better understanding of the enigma of the Loch, have offered a variety of strange theories pertaining to what Nessie might actually be.

What reminded me of some of these more colorful "alternative theories" had been an article linked at the Gizmodo website, which dealt with car-sized turtles called Carbonemys cofrinii that existed in prehistoric times. These creatures, as the image included via the link above will show, certainly resembled a partially-submerged saurian animal, the likes of which are often reported at locations like Loch Ness. Interestingly, there is a similar creature that has been claimed to appear in the Canadian Lake Champlain, thus rendering the moniker of "Champ" that was given to the watery beast said to reside there. In at least a few reports that describe Champ's physical appearance, witnesses have described a creature that resembles a large turtle, or at very least, an animal resembling some variety of turtle or other large, stocky reptile. Could we be dealing with a leftover relative of the Carbonemys cofrinii? 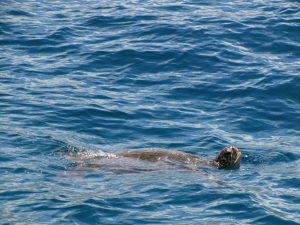 Giant turtles are hardly the strangest explanation offered as explanations for sea serpents and lake monsters the likes of Nessie and Champ. Biologist Roy P. Mackal, among others, had suggested that the creature seen in Loch Ness might actually be "a variety of long necked seal," which had adapted to having a long, snakelike neck to aid in hunting and feeding in a lake such as Loch Ness; the benefit of having a long neck such as this, as well as the reasons a mammal such as a seal might acquire one, remain unclear.

An even stranger theory regarding the Loch Ness Monster's possible identity is that of the giant Tully Monster. This creature is known to have existed about 300 million years ago, and did somewhat resemble known descriptions of the Loch Ness monster, though the creature was an invertebrate with a body resembling a cuttlefish, fitted with a long neck and snakelike mouth at the end. The problem with the Tully Monster theory, however, is that these creatures aren't known to have exceeded more than about 12-14 centimeters in length; Tullys also resided in shallow tropical waters, rather than the cold and dark depths Loch Ness offers. In this case, perhaps the long-necked seal theory is actually more plausible.

When considering the number potentials involved, especially those pertaining to climate, temperature, and food supply, virtually all the existing theories regarding the Loch Ness Monster's presumed identity fall a little short of explaining the enigma. In the event we were dealing with remnant dinosaurs or similar creatures, the propensity of reports stemming from lakes like Loch Ness, as well as other water bodies in Northern climates, presents a number of issues. Then again, reports of similar creatures in areas like the African Congo often relate to bodies of water remain so remote as to hinder virtually any progress in terms of careful and continuous study of the phenomenon. It seems that, no matter what the circumstances may be, we are continually met with hurtles in the study of these odd creatures; and thus, it is obvious that a host of rather wild, speculative theories have emerged, hoping to offer new clues to the mystery, but inevitably falling short of the available evidence.

Perhaps there are indeed biological creatures underlying such reports. But altogether, it seems that if there are indeed water monsters out there, our present methods of studying them may indeed be flawed, or simply limited altogether. Will scientific advancement in the coming decades improve the sorts of problems associated with their study, or could there be methods already available to us that might improve our understanding of such mysteries as the Loch Ness Monster and her distant cousins?

Bigfoot: The Implications of Discovery