The Rediscovery of Wartime Relics

It's not often that a news story pops up that I find so fascinating that I must blog about it. Normally, if something piques my interest it's passed on in a tweet and soon forgotten. However this week I stumbled across a Daily Mail article about the discovery of a WWII Kittyhawk P40 that disappeared 70 years ago. I was so intrigued by this discovery that I thought I should take a look at some other incredible WWII relics.

First the Kittyhawk P40. On the 28th of June 1942, Flight Sergeant Dennis Copping bravely climbed from the cockpit of his crashed fighter and set out into the Western Desert of Egypt to find rescue. Unfortunately that rescue never came and he, and his fighter were lost to an unforgiving landscape. This is until 70 years later, when the P40 emerged from the harsh monotonous terrain. The site has been described as a "time capsule" with much of the aircraft remaining intact. Aviation historian Andy Saunders has said "It’s the aviation equivalent of Tutankhamun’s tomb." Check out more of the photos here.

This great find isn't the first rediscovery of wartime machinery and surely won't be the last. 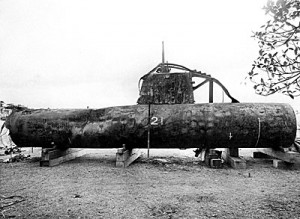 On May the 31st 1942, three Midget Japanese Submarines stealthy entered Sydney Harbour and killed 21 brave Australian sailors by firing a torpedo that detonated under the HMAS Kuttabul. The submarines were hunted down and sunk by Allied vessels including the USS Chicago and HMAS Geelong. Two of the submarines were found while one Midget Submarine, the M24 disappeared into the vast wartime crevices of Sydney Harbour. 64 years later in November of 2006, a group of recreational divers discovered the sub tangled in nets in 54 meters of water. The wreck site now falls under Australian Commonwealth Historic Shipwrecks law, and a protective zone has been placed around the site. Recovery of the sub was estimated to cost upwards of $60 Million Australian Dollars, so for the moment it will continue its service as an artificial reef. 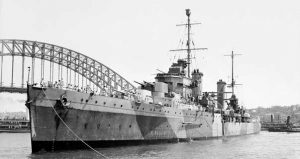 Speaking of Sydney. The HMAS Sydney was one of Australia's greatest wartime mysteries. On the 19th of November 1941, the light cruiser engaged the German Raider HSK Kormoran, losing a fierce battle and taking 645 lives with it as it sank below the water. For decades, the location of the wreck was unknown. After the battle, only a single unoccupied lifeboat (damaged by machine gun fire) was found and added not only the mystery but the tragedy of such a disaster. The mystery was solved in March of 2008, when the wreck was found off the coast of Western Australia and it too is now protected under Australian Heritage Law. 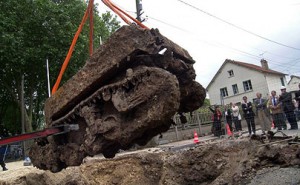 Over to France, where a US M5 Light tank used in the D-Day Invasion of 1944 was discovered buried under a street 55 miles south-west of Paris in 2008. According to residents of the time, the tank rolled into town and simply broke down or ran out of fuel. It was then pushed into a hole and buried, only to be rediscovered decades later when the local council initiated routine road repairs.

The M5 wasn't the only tank to undergo a multi-decade long subterranean slumber. In September of 2000, a Russian tank captured by the Germans in 1944 was pulled from the boggy bank of a lake near Johvi, Estonia. The 27 ton beast had rested there for 62 years. 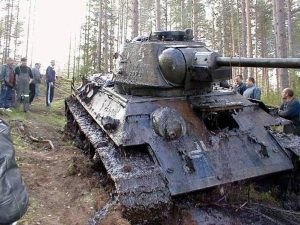 Uncovering a wartime relic isn't limited to benign wrecks. Some have been unfortunate enough to come across live and unstable ordinance. I know after my own Grandfather passed away, my grandmother found M16s hidden in the roof cavity. Fortunately it was the 80's and Australian firearm amnesties were common so little inconvenience was caused. Although this wasn't the case for 30 families in the UK's Seaham just last week who evacuated from their homes after a WWII hand grenade was discovered during excavation works. The grenade was determined to no longer be live.

The same cannot be said for a 1,100 pound bomb that was discovered by workers building a sports stadium in Goettingen, Germany in 2010. Sadly, 3 people were killed during the defusing of the bomb.

While the discovery of these relics is exciting and provides endless fascination, it must always be remembered that many servicemen and servicewomen died defending freedom and it is because of their selfless actions that we able to go about our lives with the rights we have today. Lest we forget.

On the Monstrous Road