Just a few days ago, at my World of Whatever blog, I wrote a post that addressed just a few of the uncanny parallels between the Japanese 1961 monster-movie, Mothra, and some of the cases and events featured in John Keel's classic book, The Mothman Prophecies. But, what I also did was to focus on the possibility that perhaps art - whether movies, novels or whatever - can fire up the imagination to such an extent that the collective unconscious can externalize into quasi-physical form those "things" purely born out of fiction. As noted Fortean author Colin Bennett told me: "When we imagine, we create a form of life."

And, I have been doing a bit of further digging into this area of fiction and Forteana, and one of the most notable issues to have caught my attention is that concerning a 1969 movie, The Valley of Gwangi. It stars James Franciscus, Gila Golan and Laurence Naismith who get caught up in a monstrous caper involving still-surviving dinosaurs that inhabit a hidden valley in Mexico. Among those same dinosaurs are an Allosaurus, an Ornithomimus and a Styracosaurus. And there's another beast, too: a vicious pteranodon that circles the skies menacingly.

Well, it so happens that from the 1970s onwards there has been an intriguing number of reports of pterosaur-style creatures in and around the Texas/Mexico border and certain other parts of south Texas. Of course, the pterosaur is accepted by most as being long dead. But, try telling that to the witnesses. And, while most of those who claim to have seen such beasts come across as being very credible, big problems exist: Where do these creatures live? What are they feeding on? Why don't we ever catch one or find a corpse? 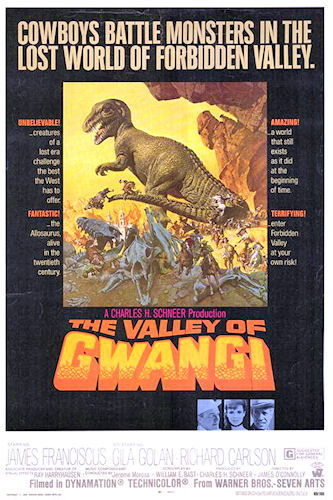 Could it be that just like Mothra and the saga of the The Mothman Prophecies, The Valley of Gwangi unconsciously inspired people to muse upon the possibility of real flying reptiles in and around the Texas-Mexico border? And, as a result, did phantom-forms of such beasts step right out of the human imagination and achieve a form of ethereal existence in the real world? Granted, it's a highly controversial theory, but it's one that parallels very well with the theories pertaining to so-called Tulpas and thought-forms.

And, it's a fact that numerous Gwangi-like reports do surface with surprising regularity in and around the Texas-Mexico area. My good friend and co-author with me on our Monsters of Texas book, Ken Gerhard, said in 2010, of this particular brand of encounter:

"During the spring of 2007, my book Big Bird! Modern Sightings of Flying Monsters, was published. In the course of doing my many and varied investigations, I was very intrigued to discover that there have been numerous reports of gigantic, winged creatures throughout south Texas for decades, with the vast majority occurring during the 1970s in and around the Rio Grande Valley. Certainly, the descriptions vary to some extent, with one group characterizing the birds as enormous black raptors that closely resemble condors; while the other group draws comparisons with the long-extinct, flying reptiles known as pterosaurs." 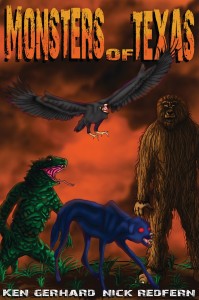 "The most recent report that I’ve received, as of this writing at least, is from an associate who has been interested in cryptozoology for years. He left a dramatic message on my answer-machine during October of 2008, explaining how he had been kayaking down the San Marcos River with a friend, when they startled a very unusual animal, causing it to fly away over a group of trees. They were both taken aback when they noted the size of the bird-like creature. He estimated that the thing had at least an eight-foot wingspan. Both were sure that whatever the mighty animal was, it was completely devoid of feathers, but possessed leathery skin, rather like that of a reptile, and a pair of very angular wings. Significantly, they both thought that it very closely resembled a classic pterosaur."

Is it merely a coincidence that many of the reports Ken has studied originated in the Rio Grande Valley? After all, the valley lies on the northern bank of the Rio Grande and separates the United States from Mexico, the setting for The Valley of Gwangi.

Some people may roll their eyes at the possibility that perhaps some of our most famous real-life enigmas could, in a strange and paranormal fashion, be born out of on-screen entertainment. But, in the world of Forteana, it's maybe best to keep all bets open...

What Really Happened to the Lubbock Lights?