The Goblin’s Grimoire: Hopkinsville Reprised, or the Hollow Earth?

The month of August 1955 was a strange one for residents around the small town of Kelly, in Christian County, Kentucky. A number of locals, as well as area law enforcement, had claimed to have been experiencing various odd things of an "alien" variety; in fact, things would end up getting so strange for one group of locals, the Sutton family of nearby Hopkinsville, that their lives would be forever changed in the aftermath.

The events that led to a terrorizing evening for the family, along with a visiting friend from out of town, were both terrifying and wholly inexplicable. Things started as Pennsylvania native Billy Ray Taylor, along with Elmer Sutton, went outside to investigate noises coming from the forest nearby on the evening of August 21st, shortly after a series of odd lights had been seen in the distance. Both men, carrying guns, claimed to have witnessed a strange nonhuman entity emerge from the trees, prompting their return to the farmhouse. Soon afterward, the Suttons and Mr. Taylor would begin an evening secured within the home, as these strange "goblins" attacked them from the outside; thus began their nightlong bout with what have forever remained known as the "Hopkinsville Goblins," an event in American Forteana that remains one of the strangest ever recorded. 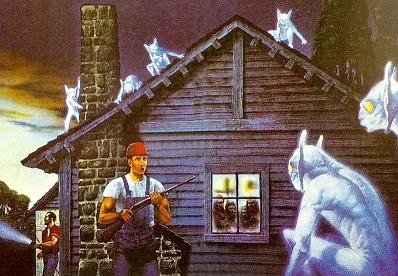 On that fateful evening in August of 1955, the badly frightened Sutton family would eventually enlist the aid of area law enforcement, who sent no less than twenty officers out to the house, expecting a confrontation with some kind of otherworldly presence. Upon arrival, while evidence of a window-rattling conflict was found a plenty, there was no sign of any of these odd, diminutive beings, variously described as humanoid, though of smaller stature, light-skinned, and sporting large ears that stood upright off the sides of their heads.

The curious story does remain among some of the more odd urban legends and unexplained encounters ever collected, prompting a number of researchers over the years to suppose that the mystery of the "Hopkinsville Goblins" might have some basis in extraterrestrial intelligence visiting from afar... though the odd manner in which these creatures behaved could hardly be described as "intelligent," at least in the human sense. Or perhaps these strange beings were something else... inter-dimensional visitors, cryptozoological monstrosities, or just plain hallucinations the occupants of the Sutton home may have somehow suffered en masse. But could there be other explanations than these listed here, which seem almost "conventional" at least within the realms of the strange and unusual? If so, what might they entail? 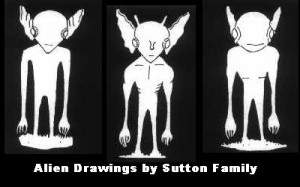 A recent report that appeared at the Who Forted? website discussed a strange story that, while almost entirely too good to be true, seems somewhat reminiscent of the fabled Hopkinsville Goblin encounter. According to blogger Greg Newkirk, he received an email from a Kentucky man claiming to have made contact with strange, diminutive creatures with pale skin, large eyes, and an odd method of "chirping" for communication. The man reports that these odd entities have appeared around his home at various times throughout the last several months, and that their presence has caused great distress among he and his family members, even to the point that they've been forced to leave the property for fear of these strange "cave dwelling" creatures. The complete article (which includes photos of the creatures alleged footprints) can be viewed here.

Could there actually be a race of semi-subterranean humanoid creatures that exist beneath parts of Kentucky, the likes of which might have appeared long ago around the time of the infamous 1955 Hopkinsville encounter? Or if not, what else might these strange creatures be... other than an elaborate hoax, inspired by the classic story of "Hopkinsville Goblins" from so long ago?