Attack of the Drones: Mysterious UAVs in Our Skies

The emergence of new drone technologies have captured the public's imagination, as well as sparked controversy, especially since the arrival of the US Navy's show-stealing X-47B drone. With its triangular shape, non-existent tail, and sleek, almost saucerian look, the aircraft succeeds in resembling classic descriptions of flying saucers dating all the way back to the 1940s.

As a journalist, one never wants to spend too much time discussing his or her own experiences, opting instead to present a fair, unbiased perspective on such subjects. However, my purpose here is hardly to dissect the controversies surrounding drone use in military operations, border patrol operations, or even surveillance in urban areas. Rather, my reason for addressing the drones on a personal note has to do with my own recent observation of some variety of small, controlled aircraft for which, at present, remains unidentified... and quite perplexing. 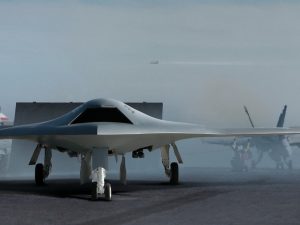 My unusual sighting of what I take to be some variety of UAV (unmanned aerial vehicle) began with the appearance of a curiously bright light moving along over Interstate 26, just outside Asheville, North Carolina, as I was heading home for the evening; I had been traveling north at about 10:22 PM on the evening of July 23, 2012, headed for the junction with Interstate 40 about a mile away. This white-orange light appeared to simply be hanging in the sky, unmoving, and though I suspected the landing lights of some commercial kind of aircraft, the object in question did not seem to move as my position changed relative to it.

Following my previously stated course, heading northbound along I-26 toward the I-40 junction, I came up alongside the object, which was partially obscured by trees at the time. At this point, I had begun to think what I must be seeing was a helicopter, as it appeared to be hovering in midair, or otherwise moving in some way inconsistent with a commercial airliner. The bright light had apparently been oriented toward the front of the craft, and on the sides I could now see a small flashing white light (making it seem like some kind of conventional craft, yet again), in addition to bluish green and red lights.

The blue lights were uncharacteristic, however, and caught my attention since this color typically does not appear on commercial aircraft of any kind (for more on this, click here for a discussion of various beacons used on airplanes for different purposes and applications). This would not be the case, however, for a hobby craft or remote-controlled stunt plane... but then again, this "plane" appeared to be hovering at the moment, hence my mind began to drift along toward the potential for a helicopter.

At this point I pulled off to the side of the road, and jumped out of my car right there on the connecting ramp between I-26 and I-40, hoping to get a better look at the craft. The object began to drift along slowly toward the south; curiously, the lighting on the craft did seem to betray a generally airplane-like shape, looking nothing like a helicopter. Furthermore, the object, which had been almost at a standstill there in the sky, had appeared to be moving silently, and as stated, quite slowly (there were few cars near me on the interstate, and I could hear no sounds that seemed to come from this object that reminded me of helicopter blades). Finally, it is also worth noting that the object appeared much smaller than the average airplane, and at a relatively low altitude (just a few hundred feet). My guess would have been that the object was roughly the size of a large automobile. 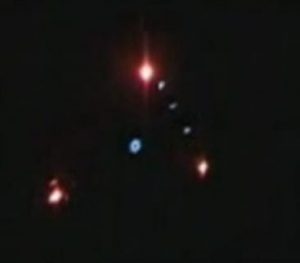 It was a very odd combination of something very conventional-looking, and yet which behaved very counter-intuitively just as well. At present, while I am leaning heavily toward this object being some kind of UAV drone, perhaps serving some military or other surveillance purposes, what's interesting is that, in years past, I know of two other individuals who have described seeing a similar object, albeit one described as being more triangular in shape, and at the same precise location!

Sure enough, a friend of mine, Tyler Pittman, described an experience where he had seen a triangular object at the precise same spot, heading North, which at it's closest was directly above him. He too pulled off the side of the road hoping to photograph the thing, which was about the size of a large automobile, he said; but it managed to get away before he could get to the camera on his phone. Finally, at roughly the same spot, my own brother Caleb, who had a friend in the car with him at the time, also described seeing this triangular shape in the sky a few years back, near the junction between I-26 and I-40.

It is interesting indeed that my own brother had this experience a while ago, and that all our recollections of the craft seem to correlate in terms of descriptions, for the most part. But here's where things get even more interesting: the night after my own encounter, Caleb and a friend had been attending an outdoor showing of the original "Ghostbusters" film at an area theater, when the two of them spotted an object overhead which was, according to Caleb, obviously the same craft I'd seen. He sent me the following at 10:01 PM on Tuesday, July 24, 2012, via SMS text messages:

I'm watching ghost busters outside at (Biltmore Cinnebar Theatres) and that triangular drone you saw last night is flying around overhead. Both Dakota and I saw it. It has a very wide range, flashing lights but definitely triangular. I don't think it's privately owned because I don't think they'd allow it in the air, I'm going to go with that it is a drone.

He followed with this as well:

Got a great look at it... Dakota (a mutual friend, and my brother's roommate) and I have some decent theories of what it might be but I really have no doubt at all that it is some kind of drone. I didn't see it hover but it was moving pretty slowly for the altitude it was at.

Like my own sighting the night before, Caleb also noted the blue lights, in addition to the triangular shape:

I saw blue, red, orange and white lights; definitely triangular. I saw it coming from pretty far away over the car dealership (Jim Barkley Toyota, on Brevard Road adjacent to the shopping mall where they were located at the time) then it flew over and headed towards the airport but circled around and flew over us again at what seemed like a different angle... maybe sideways. The lights had a pattern to them but they seemed to strobe in a slightly different manor than an airplane.

This description certainly matches my own feeling about the craft I'd seen; certain aspects reminded me very much of an airplane, while others (namely its apparent ability to hover and drift along slowly) are very unconventional. Next, I plan to touch base with local law enforcement, and see if anyone else has information on what the object may have been. Do any Mysterious Universe readers recall seeing similar objects themselves, and if so, what are your conclusions about the aircraft you had seen?

When is a MIB not a MIB?