In Search of Real Wolfmen

If I was to ask you what two words are most relevant to the phenomenon of werewolves and lycanthropes you might well say "Full" and "Moon." Or, "Silver" and "Bullet." Well, you're definitely on the right track, but I say those two words are "Linda" and "Godfrey"! Yep, not only is Linda the most well-known chronicler of all-things wolfman-themed, but she's certainly the most prolific one, too. Check out her track record to date: The Beast of Bray Road; Hunting the American Werewolf; Werewolves; and The Michigan Dogman. And, not forgetting Weird Wisconsin and Monsters of Wisconsin - both of which contain insightful data on such creepy critters. But, now for the news: Linda is back with yet another book on the subject. Its title: Real Wolfmen: True Encounters in Modern America.

Published by Tarcher/Penguin, this new title from Linda is one that I definitely recommend to anyone and everyone who has voraciously devoured Linda's previous studies of the werewolf phenomenon. And if you're a newcomer to the subject, and want to learn what it's really all about, it's just about the most important book you can read on the phenomenon to date. And I don't write words like that lightly. 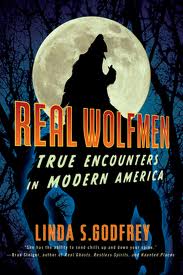 Before I get to the subject matter of the book in-depth, it's important to note a very refreshing theme that runs through the pages of all Linda's books on those beasts of a full moon: she does not try and shove down your throat any particular theory. Nor does she demand you accept this idea - or deny that one - as gospel at the expense of all the rest. Instead, Linda recognizes that while there is undeniably a real phenomenon at work, in terms of its origin (or origins) it's one still shrouded in deep mystery. And, keeping that in mind at all times, Linda offers ideas, scenarios and thoughts for what these beasts might be, but in a fashion that doesn't lecture to you or scream at you. If only more Fortean writers could take that unbiased approach.

So, with that said, onto the book. Running in at more than 300-pages, Real Wolfmen is - for me, anyway - the most important and significant of all Linda's titles (not to say that all the rest aren't important and significant, of course!), and here's why: it really provides the reader with a solid, encyclopedic study of the many and varied cases, theories, ideas, incidents and eye-witness accounts that have come Linda's way since she first found herself in the clutches of the beast, back in December 1991. Plus, it provides us with a large amount of brand new cases that stretch across pretty much all of the United States. In that sense, Real Wolfmen acts as the definitive guide to Godfrey-based gore, monster mayhem and creatures freaky, furry and sometimes fiendish.

There are two issues that really stand out when it comes to werewolves and Linda addresses them skilfully: (A) the physical nature, appearance and character of the creatures; and (B) the geographic locations where they have been seen. As for the former, it's clear that as more and more people have come forward to speak with Linda and share their stories, we're seeing an astonishing picture forming that has not previously been realized on such a scale. All across the US, and for decades - actually, maybe even for much, much longer - people have been encountering very strange beasts that have wolfish appearances, but that seem to have the uncanny ability to walk as easily on their hind-legs as they do on all-four.

Indeed, the deep similarities reported by witnesses all across the nation, and spanning the years, is near-mind-blowing.  Reading Linda's worlds, it's almost as if we're talking about a breed of wolf that, quite literally, walks like man and beast, and which has lived amongst us in stealth for, well, who knows how long? But is that all there is to it? Granted, the discovery of a bipedal wolf in our midst would be extraordinary enough on its own; but, it's clearly not the whole story. Far from it.

Linda does not shy away from addressing the many aspects of the phenomenon that push things down a paranormal pathway - and there are plenty of them. Regardless of how you, me, Linda, or whoever, interprets that undeniably emotive word - "paranormal" - the fact of the matter is that there exists a significant body of data suggesting these beasts straddle our realm of existence as easily as they do...somewhere else. What that "somewhere else" might be, is the big question. And it's now that we turn our attentions to that other aspect of the riddle that Linda negotiates with skill: the aforementioned geographic locations involved. 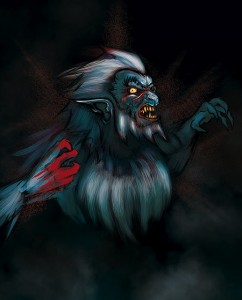 Our fearless werewolf hunter demonstrates that many sightings of werewolves occur at locations that have long been associated with supernatural phenomena: crossroads, cemeteries, sacred ground, sites of archaeological significance and more. Paradoxically, when encountered at these particular places, the creatures seem as real as they do unreal, and as tangible as they do intangible. And it's with respect to these confusing matters that Linda presents us with a variety of theories to try and explain the presence of these mystifying "things."

The down to earth theories pertaining to mental-illness and clinical lycanthropy can clearly explain a small number of reports, and chiefly those from centuries-past, many of which have now attained undeniable folkloric status. But, today's reports are harder to define. That does not prevent Linda from seeking out the answers, however. And, in doing so, we find ourselves immersed in the worlds of the occult, ancient spirit-guardians, dimension-hopping monsters,  skin-walkers, wendigos, Trickster-like phenomena,  and a multiplicity of other matters of a fantastic nature.

Then, there are the really creepy aspects to some of the stories: (A) the undeniable air of negativity, hostility and malevolence that seems to ooze forth from these beasts, and the way in which the witness can become near-overwhelmed by such terrors; (B) the sense that these animals are highly intelligent, deeply cunning, and malevolently manipulative; and (C) the totally weird - but very thought-provoking - theory that some of these entities perceived as werewolves may actually be feline animals with canine qualities. Say hello to the "Doberman-Lynxes" - bone-chilling monsters that sound like they just strode out of the pages of some Lovecraftian nightmare. I sincerely hope Linda will actively pursue this latter phenomenon as her research and writing continues, since it offers a fascinating and seldom-discussed aspect of the puzzle.

So, all in all, what we have with Real Wolfmen is a superb study of countless witness reports, numerous and thought-provoking theories for what's afoot, a dazzling body of data and - short of us coming across a body and 100 percent proving the point - a collection of material clearly demonstrating, to me, that there really is something in the woods. And, sometimes, far closer to home and civilization, too. A great job! And with her fifth werewolf-themed book now under her belt, here's looking forward to Linda's next five!

It’s All in the Cards: Tarot Reading and the Human Psyche