Greetings, fellow Coppertops! Our mission this week will take us deep into the vastness of the Cosmos and into the darkest part of the human psyche. We'll take a course to search for ETs and see the emergence of cyborgs and immortal billionaires. And after we watch the watchmen and their weapons of mass surveillance, we'll rise from the darkness to observe the hidden patterns coded in the Twilight. And just so we're on the clear: if I ever tell you to go outside a window and escape to the roof with a scaffold, you'd better do as I say! or else don't come whining later about how the agents captured you and took your mouth —Believe me, there are more sensitive orifices they can remove from your body...

(10) The first part of our mission involves the most famous painting in the world. The Mona Lisa, painted by Leonardo DaVinci, owes part of its popularity to the mystery surrounding the identity of the portrait's subject. Now archeologists in Florence have found a tomb they claim contain the rests of Lisa Gherardini, the woman immortalized by the brush of Leonardo. Did the cryptic smile give her away?

(9) The Mona Lisa has inspired quite a few of cheesy romantic songs, but I doubt she has ever inspired scary legends, like the ones involving la Lechuza. Lechuza —a Spanish word meaning 'owl'— is an interesting example of a cross-cultural myth involving old Mexican legends of shape-shifting witches,  which have now taken root in American soil thanks to the Chicano population living in the southwest of the US. Now the folk tale has been revived thanks to a photograph of a giant owl allegedly taken in Carrizo, Texas.

Though in this digital age of ours any image can be hoaxed or altered with programs like Photoshop, it's interesting to note how several classic Fortean cases —e.g. the Mothman sightings in Point Pleasant & the Flatwoods monster— have been explained by some skeptics as simple misidentifications caused by the sighting of a giant owl. And yet neither skeptics nor cryptozoologists have managed to explain a bigger mystery: How many licks does it take to reach the center of a Tootsie pop.

(8) Spotting a giant owl is one thing, but spotting a giant galaxy that shouldn't be there is even more troubling. And yet that's a discovery astronomers will have to cope with, now that the Hubble telescope has detected the oldest known spiral galaxy, which is so old by the time it formed the universe was just 3 billion years old —in astronomical terms, that's as incredible as finding a pregnant baby.

Though currently the team responsible for the finding are trying to explain the spiral as a result of a merger with a companion dwarf galaxy —a matter of catching the collision at the right time— I myself wonder if this ancient spiral galaxy might be evidence of a previous Universe which existed before ours, and left a few errand offspring before disappearing entirely out of existence. Rants against  my cosmic fallacy are welcome in the comment section.

(7) Galaxies are nice & stuff, but let's face it: what we've all dreamed of ever since we were kids, is finding a planet capable of harboring life. Of all the exoplanets detected so far, only a handful of them have entered the list of potentially habitable worlds; and this week Gliese 581g is ranking #1 among the 5 top contestants, thanks to new research conducted by the team who originally found it in 2010. Way to go, Gliese! now, on to the swimsuit competition.

(6) I hear you, bro: You want them eggheads to find ET and you want it NOW. So you think you can do a better job but lack the knowledge and academic background? Well you're in luck! The Edinburgh University is launching an online course on Astrobiology and the search for Extra-terrestrial life.

This very special ET course will be led by Edinburgh astrobiology professor Charles Cockell and director of the UK Centre for Astrobiology.

"This course is an introduction to astrobiology," Cockell explains on the university's information page. "It explores the origin and evolution of life on the Earth and its potential to exist elsewhere.

"Astrobiology addresses compelling questions of wide interest, such as: How did life originate on Earth? Is this an inevitable process and is life common across the universe?"

It occurs to me that maybe Pixar is right, and our own planet is part of some interplanetary course for alien students —Week 1: Abducting humans out of their bedrooms /Week 2: Probing techniques /Week 3: Hybridization 101— which would explain a lot of the wackiness in the UFO phenomenon!

(5) Speaking of probing idiots, remember the BP mess? Well if you don't, chances are you're neither a resident of Louisiana nor a dolphin. It turns out the spill contributed to a high incidence of mortality among the dolphin population in the gulf of Mexico, according to a new study. The oil, coupled with cold temperatures in the water from the harsh winter of 2010, formed a kind of 'perfect storm' which put a significant stress on the gulf's ecosystem.

I'm not fluent in Cetacean, but I'm sure those dolphins would have used a different word than 'perfect' to describe that environmental disaster ("Thanks so much for the oily fish, a-holes!!"). And then you wonder why Snorky and his homies are acting so nasty lately...

(4) You know what's nastier than a killer dolphin? An un-killable billionaire. And now a Russian entrepreneur (read Mad Scientist) is bent on offering those one-percenters the key to Immortality —if by 'Immortality' they are willing to settle for a robotic body or a fully holographic avatar, that is.

Itskov, a media entrepreneur, claims to have hired 30 scientists to reach this goal - and aims to transplant a human brain into a robot body within 10 years.

'You have the ability to finance the extension of your own life up to immortality. Our civilization has come very close to the creation of such technologies: it's not a science fiction fantasy. It is in your power to make sure that this goal will be achieved in your lifetime,' says Itskov in a letter delivered to billionaires listed in Forbes magazine.

Now you can say what you will about those greedy elitists, but what thing they're not is stupid, and frankly I highly doubt there will be many who'd put much credence in this offer. Not because of the probable lack of feasibility in our near future, despite what Kurzweil and his evangelists keep promising, but simply because humans will only seek to prolong their life-span if they can continue to enjoy the same pleasures they've grown accustomed to.

I mean, what's the point of living forever if you can't have Sex or a beer?? You might as well choose to be a ghost, and that's free of charge.

(3) Despite my objections to holographic immortality, it does seem that cybernetic enhancements are close on the horizon, and these developments are sure to bring a whole bag of moral and legal conundrums, which our society will probably learn to adapt with after much trial and error. Laws will always try to catch up with the pace of Technology.

Proof to this is a story that caused quite the uproar in the online techno-forums and eventually spilled to mainstream media. Steve Mann, the father of wearable computing, which will surely become more ubiquitous through the efforts of Google & other companies, was physically assaulted by employees of a McDonald's restaurant located in one of the busiest streets of Paris. His crime? being a cyborg.

The Canadian university professor was at the restaurant with his family when three different McDonalds employees took exception to his "Digital Eye Glass" device and attempted to forcibly remove it from his head. Mann was then physically removed from the store by the employees, along with having his support documentation destroyed. 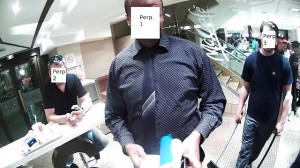 Unfortunately for the fast-food vandals, however, the whole event was accidentally captured by Mann's optical device; and now he's seeking economic compensation from McDonald's so that his invention can be repaired. Now I've followed this story closely, and although most comments agree the employees had no right to destroy Mann's property and violently force him out of the establishment, there's been a lot of back-and-forth regarding Mann's right to wear a computerized camera to a public area and take images of strangers without their consent. And even-though many comments objected to label this incident as a 'hate crime', I feel this is a short-sighted opinion. Bigotry and Prejudice often stem from pragmatic concerns, however false and misguided they be —after all, the Xenophobes at the US/Mexico border don't hate illegal immigrants just because they have brown skin, but because they fear they've come to "take their CHOOOBS!".

The future is promising to be both exciting —and litigious. In the meantime I guess cyborgs should abstain from trying to find out what it feels like to order a Royale with Cheese.

(2) If a single cyborg with an eye-camera makes you nervous, imagine a whole governmental agency having a whole file with every single one of your electronic communications! Conspiranoia you say? Not according to NSA whistle-blower William Binney, who is raising the flag on the agency's plan to assemble information on every US citizen. Eat your heart out, Oceania!

(1) If the NSA has assembled a machine akin to the 'cell-phone sonar technology' Christopher Nolan showed us in the 2nd installment of his Batman trilogy remains to be seen. What we can say with certainty is that The Dark Knight Rises has been linked to a series of real-life events in which fantasy and fiction interweave into a tapestry of 'Hyperreality'. First with Rush Limbaugh's vociferous claims that the movie is part of a Democrat conspiracy meant to attack the image of GOP candidate Mitt Romney, whose shady involvement with the firm Bain Capital seems to bring forth a subliminal connection with Bane, the latest nemesis of the Cape Crusader. And finally, the premiere of the long-awaited Summer block-buster has been tragically marked by a mass shooting inside a Colorado cinema, which took the lives of 19 people.

Where some want to see a deliberate orchestration, others however see a more subtle and complex confluence of symbolic elements, which can be partially understood through the decoding of what Fortean researcher Loren Coleman calls Twilight Language. And if you consider the fact that the shooting took place in a town called Aurora —which is the Spanish word for Dawn— once you start to pay attention, there are clues so evident even someone as obtuse as yours truly can detect them:

Until next time, this is RPJ jacking out. Let's toast to the coming of the dawn with some of Dozer's stuff --brain cells are overrated anyway, amirite?

The Aztec UFO and Psy-Ops