In Part-1 of my Saucers of Manipulation article, I noted: "The late Mac Tonnies – author of The Cryptoterrestrials and After the Martian Apocalypse – once said: 'I find it most interesting that so many descriptions of ostensible aliens seem to reflect staged events designed to misdirect witnesses and muddle their perceptions.' Mac was not wrong. In fact, he was right on target. One can take even the most cursory glance at ufological history and see clear signs where events of a presumed alien and UFO nature have been carefully controlled, managed and manipulated by the intelligence behind the phenomenon."

And, I further added: "But, why would such entities – or whatever the real nature of the phenomenon may be – wish to make themselves known to us in such curious, carefully-managed fashion? Maybe it’s to try and convince us they have origins of the ET variety, when they are actually…something very different…"

So, if "they" aren't alien, after all, then what might "they" be? And if the non-ET scenario has validity, why the desire to manipulate us and convince us of the extraterrestrial angle? Let's take a look at a few possibilities. 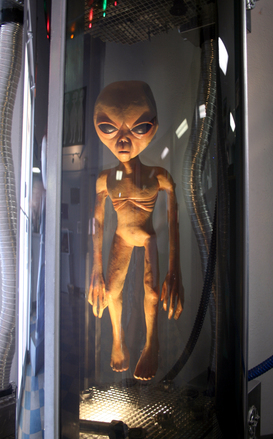 Now, before people get their blood-pressure all out of control, I am the first to admit that what follows amounts to theories on the part of those that have addressed them. The fact is that when it comes to fully understanding the origin of the UFO phenomenon...well...there aren't any facts! What we do have are ideas, theories, suggestions and beliefs. Anyone who tells you otherwise is 100 percent wrong, mistaken, deluded or lying. No-one in Ufology - ever - has offered undeniable 100 percent proof that any theory is correct beyond all doubt. And provided we understand that theorizing, postulating and suggesting do not (and cannot) equate to proving, then there's no problem. So, with that said, read on.

Let's first go back to Mac Tonnies and his cryptoterrestrials. Regardless of whether or not Mac was onto something with his theory that UFOs might originate with a very ancient, impoverished race that lives alongside us in stealth - and that masquerades as extraterrestrial to camouflage its real origins - at least he admitted it was just a theory. He didn't scream in shrill tones that he was definitely correct. And he didn't suggest that if you disagreed with him you needed to be ejected from the ufological play-pen. So many within that same play-pen - for whom, for some baffling reason, shouting louder somehow means: "I'm closer to the truth than you!" - could learn a lesson or several from Mac.

Rather than originating on far-off worlds, Tonnies carefully theorized, the cryptoterrestrials may actually be a very old and advanced terrestrial body of people, closely related to the Human Race, who have lived alongside us in secret – possibly deep underground – for countless millennia. In addition, Mac suggested that (a) today, their numbers may well be waning; (b) their science may not be too far ahead of our own – although they would dearly like us to believe they are our infinitely-advanced, technological-masters; (c) to move amongst us, and to operate in our society, they ingeniously pass themselves off as aliens; and (d) they are deeply worried by our hostile ways – hence the reason why they are always so keen to warn us of the perils of nuclear destruction and environmental collapse: they are grudgingly forced to share the planet with us, albeit in a distinctly stealthy and stage-managed fashion.

Moving on from beings of the past to entities of the future, Joshua P. Warren, investigator and author of numerous things of a paranormal nature, has addressed the highly controversial angle that the UFOnauts are our future selves: Time Travelers. And, in doing so, Josh has focused deeply on the mysterious matter of the macabre Men in Black.

Josh asks of their odd attire: "Why do the MIB dress like this? Why do we call them the Men in Black? Well, if a man puts on a black suit, with a black hat and walks down the street in 1910, and you see that man, you would probably notice him. But, would you think there was anything too extraordinary, or too out-of-place about him? No: you probably would not. And if you saw a man walking down the street in 2010 wearing a black suit and a black hat, would you notice him? Probably, yes. But, would you think you think there was necessarily anything too extraordinary? No.”

What this demonstrates, says Warren, is that the outfit of the black suit and the black hat is flexible enough to work within the social context of the culture of at least a century or more. And so, therefore, if you are someone who is in the time-travel business - and within the course of your workday, you’re going to go to 1910 to take care of some business, and then a couple of hours later you’re going to be in 1985, and then a few hours after that you’ll be heading to 2003 - you don’t want to be in a position of having to change your clothes three times. So, what do you do? In Warren’s hypothesis, you dress in an outfit that is going to allow you access to the longest period of time within which that same outfit may not draw too much unwelcome attention.

“And that’s why,” suggests Warren “in and around the whole 20th Century, it just so happens that the black suit and the black hat will work for them.”

And, if you don't want to give away who you really are, encouraging the idea that you are extraterrestrial, goblin-like or supernatural - rather than future-terrestrial - would make a great deal of sense. If, of course, the theory has merit!

Then there is probably the most controversial angle of all: UFOs are from Hell...

Dr. Nelson Pacheco – a former Principle Scientist with the Supreme Headquarters, Allied Powers, Europe (SHAPE), Technical Center – and Tommy Blann, of the U.S. Air Force, said of the UFO controversy in their book, Unmasking the Enemy: "…we propose that the ‘reality’ behind the UFO phenomenon…is due to a manifestation of non-human preternatural consciousness...the purpose being to slowly condition our minds through subtle deception to accept a false belief, while undermining our rational thought processes and our human spirit." Indeed, Pacheco and Blann were clear in their belief that UFOs have nothing less than demonic origins. And others concur. 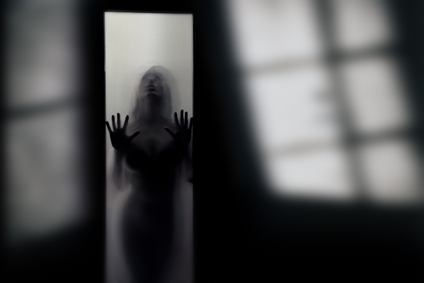 Towards the end of the 1970s, within the British UFO Research Organization (BUFORA) a number of leading figures, including founding-president Graham Knewstub and chairman, Roger Stanway, became believers in the satanic theory for the UFO phenomenon. Certainly, Knewstub was very much to-the-point when he said that "...their source may be in malignant spiritual intervention."

My own book, Final Events (of 2010), told a similar story. It related the saga of the Collins Elite: a think-tank-type group in the U.S. Government that came to the conclusion that the alien motif was a charade; one created by cold-hearted demons, who were ingeniously deceiving and manipulating us. Not only that: the deception and manipulation, they believed, had been going on for as long as we, the Human Race, existed. The conclusions of the Collins Elite were highly disturbing.

They claimed that the realm of the afterlife is eerily similar to the dream-like world of The Matrix movies. In the films, human beings are harvested for energy to power incredibly advanced machines. For the Collins Elite, the human soul provides a unique form of energy that fuels demonic entities. So, in their eyes, Hell is - in essence - a gigantic "soul factory" where the enigmatic essence of what makes us human is harvested and digested on a truly massive scale by creatures that hate us with a vengeance, but who need us to survive.

We are their food, in simple terms. And our planet is a farm. But, just like the cows in the field, we don't see the bigger picture outside of where we live. That is, until THE END, when  it all becomes terribly clear - just like for the cows. Moreover, the demons do not want to destroy the Earth. Quite the opposite, in fact. They want us to live and to thrive. After all: more people means more soul-food.  And - when they choose to move among us - they allow us to think they have origins very different to what they really represent, to keep us in our place and away from the darker truth. Hence, the UFO "meme" of today, that of fairies 500 years ago, and so on and so forth back to the dawn of humankind.

Now, before people start having nightmares that when they kick the bucket they're destined for some sort of paranormal recycling plant, even the Collins Elite's members admitted that this viewpoint of theirs was a combination of theory and suspicion. They lacked proof, in other words. The biggest irony of all is that they frowned upon the "alien believers" with disapproving eyes, while not seeing they were doing exactly what the ETHers were doing: constructing a belief-system to try and explain a phenomenon that creates nothing but puzzle upon conundrum upon riddle upon enigma.

So, where does all this leave us? Well, I'll tell you where. It leaves us with a massive body of data - that stretches back thousands of years - and which demonstrates something has been quietly (and, occasionally, not so quietly) interacting with us, relating conflicting stories, manipulating us, changing its imagery to suit the times and the people of particular eras, and provoking uneasy and disturbing possibilities that we are having - and have always had - the wool pulled over us by something that isn't what it wants us to think it is.

Demons? Time-travelers? Cryptoterrestrials? Inter-dimensional entities? I don't know. But if, one day, the truth surfaces and it really is all just aliens from a faraway world and nothing else, I'll be as wide eyed as those little gray f.....s.