The Game of the Name

In her newly published title, Real Wolfmen, Linda Godfrey notes: "Author Jim Brandon wrote in his 1983 book The Rebirth of Pan that there exists a curious worldwide repetition of location names associated with odd happenings. He calls it a 'network of name and number' and wonders whether certain names based on old, powerful words somehow attract unknown entities and unexplainable events."

Although such possibilities are often dismissed by those of a closed - or at least significantly less than open - mind, it is a fact that when we go looking for curious names and weird connections, we most assuredly do find them. I'll share with you just one of many such examples from my files. And, as this case demonstrates, it's not just place names, but the names of people too, that come into play when we delve deep into such matters.

A number of years ago, I interviewed a married couple named Barry and Elaine, who, back in 1975, underwent a bizarre experience in the thick and expansive woods of Cannock Chase, England, near to the village of Slittingmill. The case involved the couple experiencing engine problems with their car that led it to come to a grinding halt, on a tree-shrouded road in the dead of night, deep in the heart of the woods. Not a good thing! 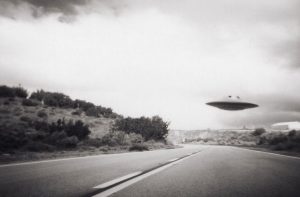 Even weirder, as the car came to a halt, to their complete and utter horror, Barry and Elaine could see lurking in the bushes and trees nearby a group of hairy, humanoid entities of a definitive hairy wild man nature. Things got even stranger - if a stalled car and a band of hairy wild men on the loose was not enough! - as they pair reported a "missing-time" episode, as well as a series of nightmares in the immediate aftermath of the incident that suggested some sort of communication between Barry and Elaine and the hairy men.

So, where am I going with this? Let's get to the next stage of the story.

The following is extracted from a now-declassified British Royal Air Force Police document of 1962, written by a Sergeant C.J. Perry. He outlined the facts relative to the late-night experience of a man who, just like Barry and Elaine at Slittingmill in 1975, experienced an encounter of the paranormal kind that resulted in car trouble.

In Sergeant Perry’s own words to the Air Ministry at Whitehall, London: "At Aylesbury on 16th February 1962, at 1530 hrs, I visited the Civil Police and requested information on an alleged 'Flying Saucer' incident. I was afforded every facility by the Civil Police authorities and although no official report had been made, details of the incident were recorded in the Station Occurrence book."

The specific details, Sergeant Perry carefully noted, were that the witness, "…a car collection driver, was travelling along the Aston Clinton road at about 0330 hrs, on 9th February 1962 when he came upon an object like a hovercraft flying approximately 30 feet above the road surface. As he approached he was travelling at 40 mph but an unknown force slowed him down to 20 mph over a distance of 400 yrd [sic], then the object suddenly flew off. He described the object as being about 40 feet wide, oval in shape with a number of small portholes around the bottom edge. It emitted a fluorescent glow but was otherwise not illuminated."

Perry added that the man in question: "…reported the incident to a police patrol who notified the Duty Sergeant, Sergeant Schofield. A radio patrol car was dispatched to the area but no further trace of the “Flying Saucer” was seen. It was the opinion of the local police that the report was perfectly genuine and the experience was not a figment of imagination."

What makes this experience so notable is that the name of the witness was Ronald (wait for it!) Wildman. So, we have one event in which a couple experienced a classic case of paranormal-themed "vehicle interference" in 1975 involving wild men. And, in the 1962 affair on the Aston Clinton Road (again involving vehicle interference) the witness was a Wildman - literally, by name!

I have also investigated a sighting of - of all things possible! - a fairy-like creature seen near the shores of Loch Ness, Scotland many years ago. The name of the witness who saw the curious, little winged thing: Harry Mann. Not unlike, one might say, "Hairy Man." And, of course one might refer to a wild man of the woods as a hairy man.

Some might say I'm reaching way too far with all this and connecting things that have no business being connected in the first place. Certainly not an impossible scenario at all - and we do indeed always need to err on the side of caution when dealing with such matters - but it cannot be denied that names (whether of people, of places, or of both) do cross paths in this curious fashion on many occasions within the domain of Forteana.

The reason? Well, that's the big question we all want answering...

The Spitsbergen UFO: A “Plant”?