It's a saga that many have heard of, but not so many know the story behind it. It's the weird tale of the "Mowing Devil" - a strange legend that had its origins more than 300 years ago in England, and which has led to suggestions that Crop Circles have been with us for longer - far longer, actually - than many suspect. And it goes like this...

Jim Schnabel, Crop Circle researcher and author of the book Round in Circles, wrote that in 1989, Jenny Randles, a well-known British investigative writer on many things Fortean “...received a surprising piece of information from a local historian named Betty Puttick, from St. Albans, Hertfordshire [England]. Mrs. Puttick had just read Randles and [Paul] Fuller’s Controversy of the Circles, and it had reminded her of a seventeenth-century woodcut she had come across in a recent book on Hertfordshire folklore.”

Schnabel added, somewhat significantly, that the woodcut in question "...depicted a small, black, horned figure, scything down oatstalks along a circular path, leaving what appeared to be flaming stalks in his wake.” 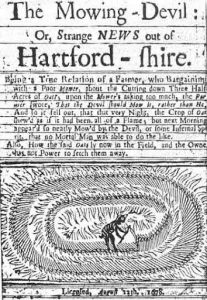 It was dated 1678, and titled The Mowing-Devil: Or, Strange News out of Hartford-Shire. Written in the distinct (and very odd, as you'll see!) style and spelling of the 1700s, it stated:

“In the said County lives a Rich industrious Farmer, who perceiving a small Crop of his (of about three Half-Acres of Land which he has sowed with Oats) to be Ripe and fit for Gathering, sent to a poor Neighbour whom he knew worked commonly in the Summer-time at Harvest Labour to agree with him about Mowing or Cutting the said Oats down.

"The poor man as it behoov’d [sic] Him endeavour’d [sic] to sell the Sweat of his Brows and Marrow of his Bones at as dear a Rate as reasonably he might, and therefore askt [sic] a good round Price for his Labour, which the farmer taking some exception at, bid him much more under the usual Rate than the poor Man askt [sic] for it: So that some sharp Words had past, when the Farmer told him he would Discourse with him no more about it.

"Whereupon the honest Mower recollecting with himself, that if he undertook not that little Spot of Work, he might thereby lose much more business which the Farmer had to imploy [sic] him in beside, ran after him, and told him that, rather than displease him, he would do it at what rate in Reason he pleas’d [sic]: and as an instance of his willingness to serve him, proposed to him a lower price, than he had Mowed for any time this Year before. The irretated [sic] Farmer with a stern look, and hasty gesture, told the poor man

"That the Devil himself should Mow his Oats before he should have anything to do with them, and upon this went his way, and left the sorrowful Yeoman, not a little troubled that he had disoblig’d [sic] one in whose Power it lay to do him many kindnesses.

“We will not attempt to fathom the cause, or reason of, Preternatural events: but certain we are, as the most Credible and General Relation can inform us, that same night this poor Mower and Farmer parted, his Field of Oats was publickly [sic] beheld by several Passengers to be all of a Flame, and so continued for some space, to the great consternation of those that beheld it.

“Which strange news being by several carried to the Farmer next morning, could not but give him a great curiosity to go and see what was become of his Crop of Oats, which he could not imagine, but was totally devour’d [sic] by those ravenous Flames which were observed to be so long resident on his Acre and a half of Ground.

“Certainly a reflection on his sudden and indiscreet expression (That the Devil should Mowe [sic] his Oats before the poor Man should have anything to do with them) could not but on this occasion come into his Memory. For if we will but allow our selves so much leisure, to consider how many hits of providence go to the production of one Crop of Corn, such as the aptitude of the Soyl [sic], the Seasonableness of Showers, Nourishing Solstices and Salubreous [sic] Winds, etc., we should rather welcome Maturity with Devout Acknowledgements than prevent our gathering of it by profuse wishes.

“But not to keep the curious Reader any longer in suspense, the inquisitive Farmer no sooner arriv’d [sic] at the place where his Oats grew, but to his admiration he found the Crop was cut down ready to his hands; and if the Devil had a mind to shew [sic] his dexterity in the art of Husbandry, and scorn’d [sic] to mow them after the usual manner, he cut them in round circles, and plac’t [sic] every straw with that exactness that it would have taken up above an Age for any Man to perform what he did that one night: And the man that owns them is as yet afraid to remove them.” 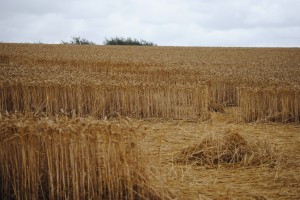 Somewhat intriguingly, the reference to the field being “all of a Flame” the night before the curious formation was found in the field, was highly reminiscent of a similar incident from 1964 that occurred in the north of England. During the early part of 1995, while digging through a then-recently-declassified collection of British Ministry of Defense files on UFOs that were held at the National Archive at Kew, England, I was startled to find the following letter, submitted to the MoD, via the National Physical Laboratory at Teddington, on March 23, 1964. The subject matter was a curious, circular area of flattened ground found on land in the town of Penrith, Cumbria, England.

The Reverend T.E.T. Burbury - who took a personal interest in the affair - wrote:

“Does an apparent column of blue light about eight feet in diameter and about fifteen feet high which disappears and leaves a mark of very slightly disturbed earth, the same diameter, mean anything to you? I examined the ground which is about one hundred yards from the nearest building and there are no pylons near. There was no sign of burning, either by sight or smell; the grass growing between the exposed ground appeared quite normal. There were no signs of bird tracks or droppings: the ground simply appeared to have been lightly raked over in an almost perfect circle.”

For its part, records revealed to me, the Ministry of Defense dismissed the case as having no bearing on the defense or safety of the British Isles and wholly forgot about the matter. But, how notable, I thought: a Crop Circle-style formation that was believed to be the work of the Devil had appeared in southern England in 1678 – the night before which the field in question was seen to be “all of a flame” – and almost three hundred years later, something of a strikingly similar nature occurred in the north of England.

Maybe Crop Circles really are much older than many assume...

Poll Position: UFOs and the Enigma of Public Opinion