The Psi Session: Modern Seance or Psychology of Spirit?

Long before weekend warriors began to hunt lonely graveyards and haunted homes by night, sporting the titles of "ghost hunters" and "paranormal investigators," and even before there were the parapsychologists of yesteryear hunting ESP and PK in the laboratory, there were the spiritualists. Especially toward the end of the nineteenth century, it was a popular pastime for those interesting in interacting with the neither realm to utilize "spiritual sciences" as medium for contacting the dead.

Today, the methods employed by the spiritualist of yesteryear--namely involving such archaic practices as table tipping, pendulum swinging, automatic writing, Ouija boards and planchette or pointing devices--have largely been cast to the wayside as tools to be utilized in reaching that proverbvial other side. The modern paranormal researcher likely would find these sorts of approaches highly insufficient for use in gathering real data about a presumed haunting today, with the possible exception of psychic mediums who might feel such techniques would "enhance" aspects of their perception. But is it really the case that spiritualist practices of this sort should be thrown to the wayside, having no merit for use today? 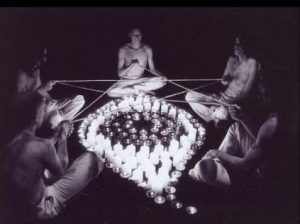 Some time ago, I had written an essay on parapsychology and ghost research for an anthology released by New Page Books in their "Exposed, Uncovered, and Declassified" series, titled Ghosts, Spirits, and Hauntings: Am I Being Haunted? My essay, “Psychic Gift or Psychotic Nightmare? The Biology of the Supernatural,” dealt with some of the connections between presumed hauntings and ghostly manifestations, paired with knowledge of the pharmacology of certain substances with hallucinogenic properties; this was an area, of course, which I studied far more in-depth in an earlier book called Magic, Mysticism and the Molecule. However, in this same collection of essays on the science and study of paranormal phenomenon, another essay, written by veteran ghost researcher Andrew Nichols, had managed to capture my attention, titled “Haunted Houses: Theaters of the Mind.” In it, Nichols seemed to summarize my own attitudes toward more conventional modern approaches to ghost hunting:

For too long, most paranormal investigators… have concentrated on the technological approach to haunting investigations, focusing on the use of various pieces and types of recording equipment with, frankly, very limited results. What has often been overlooked in the past has been the psychological aspect of hauntings, and that is because the haunted house still remains the domain of the amateur investigator, while most professional parapsychologists are more concerned with repeatable [psychokinesis] and ESP experiments in their laboratories and academic settings. This is unfortunate because with a cooperative effort, we have a greater chance of reaching a better understanding of hauntings. The amateur ghost hunters also do not seem to be coming up with the goods, tending instead to stick with the same old concept of spirits.

Interestingly, in his probing of the psychological nature underlying a variety of ghostly circumstances encountered over the years, Nichols has employed what are, essentially, spiritualist practices along the lines of the classic seance, where the more arcane aspects of nineteenth century spiritualism are employed. These are less often utilized with the actual intention of "manifesting" a ghost, however; in what Nichols calls "psi sessions," he employs seance-like circumstances in conjunction with aspects of hypnotherapy and modern psychology in an effort to create subtle suggestions to the "victims" of a haunting, who are participants in the session. In this way, Nichols has found that while the underlying phenomenon may indeed be a real manifestation of something non-corporeal, he nonetheless feels it often seems to use the human psyche as its medium for exchange with the physical world. By taking the psychological elements at play into further consideration, Nichols claims to have managed to successfully "un-haunt" various homes and locales over the years.

To say that a ghostly manifestation could exist in some sense, but required the use of physical bodies and the human psyche in the environment to manifest aspects of its presence, would not detract from the notion that our classical concept of a "ghost" (or something similar to it) could actually exist... and in all likelihood, they do. I would argue, however, that the traditional model we have long applied to the study of paranormal manifestations along these lines is incomplete, and that rather than looking as the element of human psychology as a means by which we can "debunk" claims of the paranormal, instead we might seek to better understand certain aspects of the mystery in more complete way through their incorporation.