UFOs: The Porton Down Affair

On the night of January 23, 1974, an enigmatic and unresolved event occurred on the Berwyn Mountains range in North Wales, United Kingdom that, for some within the UFO research community, has come to be known as the definitive British Roswell. Researcher Andy Roberts stated of this mysterious affair (in his book, UFO Down!): “The claim was that a UFO piloted by extraterrestrials crashed, or was shot down, on the mountain known as Cader Berwyn and that the alien crew, some still alive, were whisked off to a secret military installation in the south of England for study.”

That secret military installation was said to be none other than Porton Down. Beyond any shadow of doubt, one of the most secretive of all government-connected installations situated within the confines of the United Kingdom, Porton Down can be found in the green and pleasant county of Wiltshire, and its overwhelmingly-classified work focuses to a very significant degree on exotic viruses, chemical- and biological-warfare.

Although work at Porton Down originally, and secretly, began at the height of the tumultuous First World War, it was not until the dawning of the 1940s that the installation became the central hub for British interest in, and concerns relative to, the expanding realms of chemical- and biological-warfare. From 1946 onwards, one year after the successful defeat of Nazi Germany, Porton Down’s work began to focus more on the defensive – rather than chiefly offensive – aspects of such issues, and in 1957 the installation was duly christened the Microbiological Research Establishment.

By the late-1970s, a decision was made to place the MRE under the control of a civil body. As a result, significant reorganization duly occurred: on April 1, 1979, the MRE became the Center for Applied Microbiology and Research. Then, in 1995, it was absorbed into the Defense Evaluation and Research Agency. Six years later, there was yet another change: DERA split into two organizations, a private body called QinetiQ, and the Defense Science and Technology Laboratory, a body steeped in official secrecy, as a result of the fact that it is an arm of the Ministry of Defense. Today, the facility is known as DSTL, Porton Down.

Of course, the idea of dead aliens taken to Porton Down sounds like a conspiracy theorists’ wildest dream come to life. But, despite vociferous attacks from the more skeptically-minded researchers in the UFO research community, it has steadfastly remained an integral part of the story ever since it first surfaced – publicly, at least – in 1996. The original source of the Porton Down story as it specifically related to the Berwyn controversy, was a UFO investigator named Tony Dodd, a now-dead North Yorkshire, England police-sergeant with a quarter-of-a-century of service in the Force to his credit. At the time the account was first revealed, Dodd flatly refused to reveal – to anyone - the real name of the source for his sensational story, and instead preferred to provide him with the pseudonym of James Prescott.

According to Prescott, at the time of the Berwyn incident, he was stationed at an Army barracks in the south of England. Stressing to Dodd that he could not name either his unit or his barracks as they were still very much operational, Prescott said that by January 18, 1974 it was acutely clear that something most unusual was afoot: he and his colleagues were placed on emergency stand-by status. The reason why soon became incredibly apparent. Twenty-four hours later, Prescott’s unit was directed to make its careful, secret way towards the English city of Birmingham.

The team then received orders to proceed with speed towards North Wales, but were halted on the outskirts of the English city of Chester, in readiness for a military exercise they were told was about to take place in the area. Not long after, the orders changed yet again: make your way to the town of Llangollen, North-East Wales. On arrival at Llangollen, recalled Prescott, the unit noticed a great deal of ground-based activity in the area. In addition, military aircraft were soaring across the darkened, mountainous Welsh skies.

Extraordinary events were clearly unfolding at an extremely fast rate. But it was shortly after 11.30 p.m. when things really began to take shape, and Prescott and his colleagues were on the move once more: to the village of Llandderfel. The team soon reached the little hamlet, whereupon they were directed to load two large, oblong boxes into their vehicle: “We were at this time warned not to open the boxes, but to proceed to Porton Down and deliver the boxes.”

A number of hours later, they reached the secret Wiltshire-based facility, and were duly directed to a specific part of the installation. Once inside, explained Prescott, the boxes were opened by staff at the facility in their presence: they contained nothing less than two strange, unearthly creatures that had been placed inside decontamination suits. The staff at Porton then began the careful, daunting task of opening the suits. Prescott said that when this action was complete it was clear to all those present that the entities were not of this Earth. He elaborated:

“What I saw in the boxes that day made me change my whole concept of life. The bodies were about five to six feet tall, humanoid in shape, but so thin they looked almost skeletal with a covering skin. Although I did not see a craft at the scene of the recovery, I was informed that a large craft had crashed and was recovered by other military units.”

Perhaps even more remarkable was what Prescott had to say next. Namely, that shortly after his life-changing experience at Porton Down, he had the opportunity to speak with several colleagues from his own unit, who guardedly informed him they had also transported aliens to Porton Down, but with one amazing difference: “Their cargo was still alive.” And that’s where the Berwyn Mountains story dries up, unfortunately. But the Porton Down/UFO link continues.

In 1999, Nick Pope, who – from 1991 to 1994 – officially investigated UFO reports for the British Ministry of Defense, wrote a novel titled Operation Thunder Child that focused upon a hostile attack on the British Isles by alien entities. When Pope’s book surfaced, rumors proliferated that perhaps he was secretly using the genre of science-fiction to impart startling science-facts. Regardless of whether or not this was the case, in Operation Thunder Child, alien bodies recovered from a UFO crash are secretly taken to Porton Down – precisely the same location where it, was alleged, alien bodies found on the Berwyn Mountains, North Wales were transferred in January 1974. 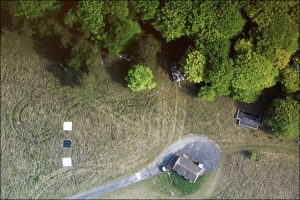 At the same time that Nick Pope was writing his Operation Thunder Child book, the British Ministry of Defense, in a truly unprecedented and extremely unusual move, gave a huge amount of technical assistance and support to a BBC science-fiction production titled Invasion Earth that dealt with an attack on the planet by hostile alien entities. Inevitably, this led to rumors that it was all part of a less-than-subtle attempt on the part of certain elements of the British Government to get the general public thinking about the possibility of humankind waging outright war against an alien species. Does the MoD know something that the rest of us don’t?

A Ministry of Defense source – who was specifically referred to me directly by Nick Pope - had a number of perceptive comments to make on this particularly odd set of circumstances: “It’s extremely strange,” said the man, “that on the one hand the MoD is publicly so dismissive about UFOs; and yet on the other they bent over backwards to provide assistance to a TV company producing a science-fiction drama which starts with the Royal Air Force shooting down a UFO. Normally, the Ministry of Defense only helps film and TV companies where it believes that significant benefits will fall to the MoD in terms of recruiting, training or public relations. This was the case, for example, with our participation in the James Bond film, Tomorrow Never Dies. What, one wonders, did the MoD think it had to gain from helping to perpetuate a view that the Royal Air Force were virtually at war with extra-terrestrials? Questions about our participation in this project were raised at the highest level within the Ministry of Defense.”

Most notable of all, in Invasion Earth, a number of aliens retrieved from a crashed and captured UFO are taken to – yes - Porton Down. Are we merely seeing here examples where, for a variety of innocent reasons, the world of book- and TV-based science-fiction had a Ministry of Defense/Porton Down theme running through them? And what of the James Prescott affair? Was Tony Dodd fed real data? Was he merely misled by a Walter Mitty-type character? Or is there a bigger picture concerning Porton Down and UFOs that we aren't seeing?

I'll have more to say on all this in a future post...

In Search of Real Wolfmen