When the Waters Run Together: Ghost Stories vs Urban Legend

It's summertime here in the American South, and like many of us, I occasionally have the time to break away from the keyboard that accompanies this one-eyed, retina-burning monster that is my laptop, and head into to the forest. Last night was particularly interesting, as I found myself sitting by a large bonfire, surrounded by several dozen miniscule females waving equally miniaturized pointed spears, conversing on the obvious truths of fairy lore here in the mountains.

Fortunately, I hadn't been kidnapped by fair folk of the winged and magical variety; these were merely a group of girl scouts, armed with little spears barely sharp enough for piercing the marshmallows they were burning to a crisp as we sat talking. I had been hired to join this group as a storyteller, and as is often the case, I found that as I spun tales to these young ladies before the fire's light, a number of unique parallels began to emerge as we cross examined the areas where ghost stories, folklore, and urban legends tend to meet. 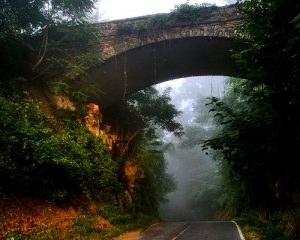 I had chosen a selection of local stories for this group, native to my own hometown of Asheville, North Carolina, and began by telling the legend of Helen's Bridge. The story takes place at a haunted castle high on Beaucatcher Mountain, which overlooks town, named Zealandia for it's builder's native home of New Zealand. Much later on, Zealandia came into possession of a wealthy man by the name of Phillip S. Henry, at which time it is said that a stable fire on the property took the life of a young girl. The girl's distraught mother, Helen, was often seen around the grounds of Zealandia Castle; some have supposed that she had been Henry's mistress, others think she may have merely been a house maid. Regardless, soon after the fire that took her daughter's life, Helen's body was found hanging from a bridge that connected two cliffs below the property. Thus, the bridge, which remains there below the castle to this very day, has since been known to locals as "Helen's Bridge."

The story is unique enough by itself, and on occasion, I have indeed spoken with a number of individuals who claim to have had their own experiences at Helen's Bridge over the years. The location also happens to be one of the few locales where I've managed to photograph strange light anomalies; could it actually be that the ghost of a woman has remained there since the tragic events that claimed her life, and that of her young daughter?

The legend continues to say that Helen's ghost is indeed seen around the bridge, typically (or maybe even stereotypically) on cool, foggy nights when there is little or no moonlight. Late night motorists who pass beneath the bridge will sometimes see Helen's figure wandering nearby, while others claim that they will pass beneath the bridge only to experience inexplicable electrical malfunctions in their vehicle. One man named Mitchell Buckner told me that this happened to him in the late 1970s while driving over the mountain toward town. As he passed directly beneath Helen's Bridge, the headlights on his vehicle blacked out inexplicably, and would not return until after he had coasted nearly the rest of the way back to town in faint glow of moonlight against the dampened roadway ahead.

So is there indeed truth to the legend, or is really just that: a legend, with little factual basis to substantiate the sorts of claims people have made over the years? I do find it interesting that, in the town of Asheville alone, locals who dig deep enough will find other references to haunted locations that incorporate the ghost of a woman named Helen. Over on the south end of town, I was told one evening by an aging police officer on duty that as a teenager, he used to take his girlfriends up to a run down mountaintop residence many decades ago, which had been known as Helen's House. "Those girls would get so scared up there, they used to jump all over us," he laughed. 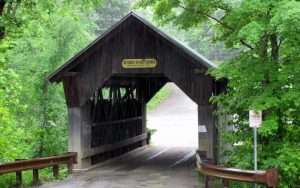 Looking into things a bit deeper, one will also find that Asheville is not the only American town with stories of haunted bridges and hangings. Indeed, the historic Gold Brook Bridge in Vermont is known by locals as "Emily's Bridge," with stories of a ghost that haunts the location; one version of the legend holds that Emily's body had been found hanging from the rafters of the old bridge's cover in similar fashion to that of Helen of Zealandia. Gettysburg also seems to have its version of the legend, where three soldiers were said to have been hanged from the Sach's Bridge near US President Dwight Eisenhower's vacation spot on a nearby farm.

And of course, the haunted bridge motif appears in some of the best known classic fiction, as well. Think of the headless rider that haunted the famous bridge in Sleepy Hollow, where poor Ichabod Crane had his own run in with an angry ghost. But returning to Helen's story on the mountain overlooking Asheville, there are more elements to the story that provide a bit of crossover with the realm of Urban Legend. Indeed, we see that one of the more popular traditions associated with the legend of Helen's Bridge holds that if one parks their car beneath the bridge at night, invoking the spirit by chanting "Helen come forth" three times, her wayward spirit will indeed appear before frightened onlookers. This is a typical variety of conjuring that is present in children's games and urban legends such as that of "Bloody Mary," and arguably, if there ever had been any truth to the appearance of a woman or her ghost around Zealandia Castle, that story has been embellished heartily over the years.

Hence, as I shared these stories with my captive audience of grade schoolers, I reminded them that some of the tales, while fun and even a bit scary, really are just legends. "Don't you worry, though," I confided to the girl scouts. "Maybe next year, when you're a bit older, I'll come back and tell you some of the real ghost stories I know!" And I'd be glad to do it... although the stories of "real" hauntings sometimes just aren't as fun as the embellished ones! Indeed, it appears that in order to make things fun, the waters must run together, so to speak, allowing the ghost stories of various localities to borrow from the sensational aspects of urban legends... and no matter what haunted bridge those waters must run beneath to complete the tale.