Matthew Williams – a former special-investigator with the British Government’s Customs & Excise agency – holds the distinction of being one of the very few people in the world arrested, charged and convicted for making a Crop Circle – although the actual crime was of causing damage to the field in which the formation was made.

I will be the first to admit that Matthew is a good friend of mine, and a great deal has been written about his reasons for making crop-formations that is either misleading or downright untrue. And, more importantly, the notion that people such as Matthew can be dismissed as mere hoaxers is an utter failure to understand and appreciate the philosophy and experiences of the human circle-makers.

In an extensive interview I conducted with Matthew, he began:

“In 1992, when I got involved in Crop Circle research, there were a lot of people who believed that Crop Circles could only be made by otherworldly forces. Admittedly, I didn’t know very much about Crop Circles back then; and hearing some of the arguments of ‘bent nodes’ and ‘blown expulsion cavities’ coupled with UFO sightings, made the whole subject seem extraordinary. Without researching the subject for myself, I was inclined to believe the so-called experts and their seemingly plausible theories about aliens making Crop Circles."

“My early research efforts involved investigating areas where Crop Circles were expected to appear. I coordinated efforts with other friends and researchers via radios, and we patrolled fields in our cars, armed with night-vision equipment. Back in those hazy days, I used to think that people who made Crop Circles were trying to confuse us and lead us away from the path of discovering deeply encoded alien messages. I was on a mission to stop man-made Crop Circles appearing.” 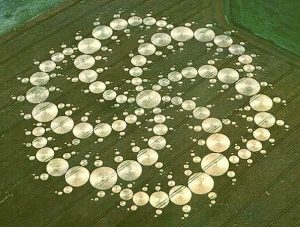 “The standard method of researching Crop Circles generally involved going into them on the same day they had formed and studying what was present. My own motivation was to get closer to whatever was creating the Crop Circles, at night and when the Circles were formed. If we had caught any human in the act of making Crop Circles, then the plan was to scare them off or perhaps even call the police. In fact, our field surveillance activities were actually welcomed by the police as a form of anti-criminal vigilance. If we could be sure we had cleared a field of any human-made Crop Circles, then logic dictated that if a Crop Circle did appear, it must be genuine.”

Matthew admitted, however, that these plans were both “rather naïve” and “fruitless” with “none of us even getting close to a Crop Circle being created under weird or 100-per-cent confirmed fields-clear-of-hoaxers.”

He elaborated: “It wasn’t until about 1994 that I decided to seek out the human Crop Circle makers. What subsequently happened could be termed the ‘other side’ of the story. By this time, I had a good idea that many Crop Circles were made by humans; but was unsure if there was a level of disinformation being spread. It was then I met [Crop Circle researcher, maker, and personality] Rob Irving and heard his immortal quote, which I still use to illustrate the simplicity of the Crop Circle argument: ‘You’ll never be sure until you actually make one.’

“I was given countless tales of UFO activity and even strange synchronicities which took place in the man-made Crop Circles, and which made the Crop Circle makers wonder if they were being influenced by a higher, guiding hand - perhaps at the design stage, or out in the field.

“I befriended a number of Circles teams and watched Crop Circles being made under various conditions. Back in the early days, I thought that speaking to the human Crop Circle makers would help me to determine which Crop Circles were made by unknown persons or paranormal forces. Later on, however, I became convinced that human-made Crop Circles made up the whole sum of the complex Pictograms, leaving only very simple Crop Circles as possible unknowns.” 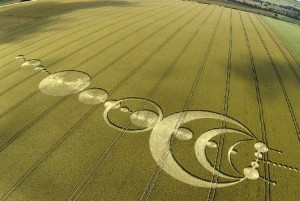 Matthew makes an important point that – whether you agree with him or not – takes him just about as far away from being a mere hoaxer as it is possible to get: “I believe that the human Crop Circle makers may be guided by a connection to a higher intelligence, a gestalt or group mind; and the symbols that are put down are deep-routed subconscious expressions. This would explain why some telepaths or psychics claim to have seen Crop Circle designs before they appear – because we are all dialed into the same group-mind ‘internet.’”

On this same matter, he continues:

“The synchronistic events which happen each year in the unfolding designs that the Crop Circle makers come out with are often remarked as being too much of a coincidence. Crop Circle designs have been repeated in different parts of the country by teams who didn’t share designs beforehand. There have even been teams who have gone out on the same night to the same field, made designs, not knowing the other team was present, and their designs have had similarities. The chances of this happening, without planning, are slim; so it would appear that something paranormal is working for the Crop Circle makers.”

Matthew continues: “Why do Crop Circles have power? I know that crop is a living medium. Unlike any other type of canvas that an artist may use, crop has a life-force energy which, when used on such a large scale, makes crops blend natural Earth-energy magic with human-energy magic. What Crop Circle-makers may have rediscovered is the ancient art of natural magic – working with large emblems as part of the energy system of the Earth.

“Take sacred sites such as stone-circles: these were erected as temples for people to visit, perhaps as part of a sacred quest seeking answers. Today, Crop Circles fill a similar role, attracting people who ask questions and putting visitors closer to paranormal sources.”

On this theme, Matthew adds: “Many people have expressed concern to me about humans making Crop Circles and trying to instill magical energy in them. Along with this comes a distrust of the motives of Crop Circle makers. However, if researchers are to be believed on the healing energies of many Crop Circles, then this is not a negative thing, by definition.”

As for the process of creating Crop Circles, Matthew explains:

“Over the years from 1994, I participated as Crop Circle maker, designer of Crop Circles, and as observer to other persons, creating Crop Circles. They are typically created in the dark, just after it gets too dark to be seen in the field. Typically, this was from 10.00 to 11.00 p.m. in the British summer months. Teams of between two and nine would work under the guidance of whichever team member designed or studied the design. Coordination is essential among team members.

“The actual laying down of the Crop Circle is usually done in stages. The first stage is known as foot-lining, which means the creation of the thin part of the design, without doing the shaded areas of the design, which represent flattened areas of crop. One person will hold one end of a tape measure. The distance on the tape measure is found and the other end of the tape is held. One end of the tape is held in place and the other end is walked around, creating your circles. Holding the tape tight is important, as over a distance of 100 feet you can get considerable sag in the tape which can, if not handled correctly, cause circles to have wobbly edges.

“To etch in the internal designs, two ends of the tape are held, which gives a straight line, and a third person walks along the edge of the tape. It is important to note that these etching lines, created by the width of your foot in the crop, are often visible as thin lines hinted at when aerial photos of Crop Circles are zoomed in on. Marker posts are used to guide tape-measurement points. These points are driven into the ground and are often made of bamboo posts, similar to those found in garden use. 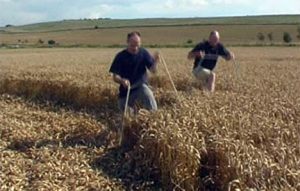 “Once the design is fully etched with foot-lines, then the process of filling takes place. The teams have to be briefed as to which parts are to be filled or left standing. There are usually simple rules to follow to make sure you don’t flatten the wrong area. Often tramlines or tractor lines are mistaken for starting or stopping points for filling work. In the filling stage, planks of wood affixed with ropes are used to press down with large areas of crop. Approximately one meter in width, these boards will leave tell-tale signs of human construction when viewed from the ground or the air.

“The appearance of many circles will be a combed effect. Some types of crop, brittle plants or late-in-the-season plants, fall down well and do not grow back up to the light. Formations created in these fields look very impressive because the ground-lay, with its flat uniformity, shines from the air when photographed from the correct angle.”

Matthew makes a valuable observation: “Crop Circle makers tread a thin line. On the one hand, they want people to come to them and get experiences from the Crop Circles. If Crop Circles were known as a 100-per-cent, man-made hoax, then the public might turn away. So this is why authorship of most Crop Circles remains anonymous, for legal reasons and for reasons of sensitivity. However, to stem the rot of blind belief in Crop Circles and to make sure Crop Circle makers and their motives are known to those who have delved deeper, there is a dialogue between some researchers and Crop Circle makers. This is to allow the more open-minded to see the bigger picture at work.”

Again, whether people agree with Matthew and those who follow a similar path, the fact is that in the minds of the people who create them, they are most assuredly not hoaxers, merely on a path to spoil everyone’s fun and deceive them. No: if people such as Matthew are correct then (a) at least some of the human Crop Circle-makers seem to be guided by a form of higher, unidentified intelligence; (b) the work of the Crop Circle-makers appeared to be inextricably linked to the worlds of ancient magic and archaic ritual; and (c) the public image of the “Crop Circle hoaxer” – that is often offered by, and to, the collective UFO and Crop Circle research communities - is about as far away from the truth as it is possible to get.