It has been an art employed by some of the greatest minds and practitioners of the sciences over the centuries, as well as many of the more nefarious names in history as well. From scholars like Pythagoras in Ancient Greece, to medieval wizards like John Dee and, much later on, the controversial occultist Aleister Crowley, magic has been heralded as a force by which man can connect with the parts of reality beyond which most mortal men could otherwise reach.

By the standards of most today, what we call "magic" involves archaic processes of trying to utilize spells and sorcery--in addition to belief that such things can prove effective--in an effort to change or bend the forces of nature. Due to the perception that such things are indeed remnants of what are now outmoded ways of thought and belief, the idea of using magic for practical purposes today has lost much of its appeal. And yet, there are still many that do act as proponents of the use of ritual magic for bettering their lives, and changing the world around them. Is their belief in such ancient arts completely in vein, or are there elements to the mystery of the modern magi that do make their esoteric practices worthwhile? 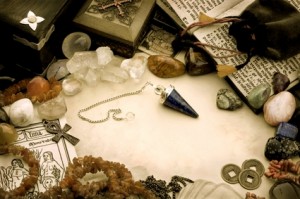 Webster's Dictionary defines magic as "the power of apparently influencing the course of events by using mysterious or supernatural forces." Even while looking up this definition, I began to notice my own preconceptions and biases toward the word all unto itself; immediately, I envision either a corny series of silly images involving spellcasters and sorcerers, or conversely, I'm reminded of the darker perceptions attributed to "black magic" and the dark arts.

But in truth, there are a variety of practices maintained today which, in essence, seek to influence the course of natural events by utilizing the supernatural. In fact, given this definition, how can we really differentiate something prayer or meditation from magic? They certainly utilize supernatural forces in an attempt to influence the outcome of events to come, and yet it could be argued that perhaps a majority of Americans, for instance, either employ one or the other of these in an effort to better their lives or those of their loved ones.

In fact, to further our comparison between magic and prayer, I've often considered how such things might have risen from people in ancient times, and their belief in (if not outright projection toward) anthropomorphized gods that resembled the various elements of nature, which in their extremities could make life very hard on societies more primitive than those today. In all likelihood, use of ritual practices by ancient people stemmed from attempts at reconciling with these things that threatened their way of life, and thus, they were carried out in order to appease their presumed nature-gods. Taking this into consideration, it is interesting to note that in modern times, our ideas of an "angry God" have softened somewhat, and people now, thanks to the ease and simplicity of modern life (particularly here in the West) pray to a creator that is generally viewed as being more loving and gentle. And of course, our sense of there being a necessity for such things as magic rituals has lessened considerably, also.

But does this remove entirely the potential that magic may hold some relevance in our lives nonetheless? Perhaps not, since even our present studies pertaining to quantum physics show us more and more with time how perception alone is capable of influencing the outcome of events. Perhaps the use of focused rituals have a greater promise for effectiveness than most of us realize... putting it out to the Mysterious Universe readership, do you feel that magic and ritual bear any relevance in modern times, and if so, in what ways?

The Strange Saga of Kenneth Goff