Greetings, fellow Coppertops! Our journey this week will take us from the modest beginnings of our culture to the wonders that await us in the not-so-distant future. We'll try to find the truth behind legends both ancient and modern; and as we ponder upon possible space travelers who might feel curiosity toward our Olympic ceremonies, we will gaze upon a red dot in the sky, and hope our own curiosity will be sated with the help of the mechanic ambassador we've sent on our behalf. Get ready to launch, and I REALLY hope you've managed to learn the tunnel system's layout by now!

(10) Our first stop takes us to India, where a huge massive blackout this week left 700 millions people without electric power for many hours. Although the causes for the blackout have been largely attributed to a severely flimsy infrastructure coupled with a growing demand for juice among the Indian population, the reason I chose to pick this story is because it manages to remind us of how dependent our civilization has grown to the given comforts brought by electricity. For most of the Western world, it is almost a trivial given we pay only attention to, when the flipping of a switch is not met by an expected result.

One of my 'favorite' Doomsday scenarios is still a GENERAL blackout caused by massive solar flare, which subsequently triggers a geomagnetic storm the likes of which our energy-thirsty society has never --thankfully-- experienced. As the Indian blackout turns into a real-life prelude of our worst nightmares, must we really wait for entertainers like J.J. Abrams and Tom Hanks to incite us to do something before it's too late? 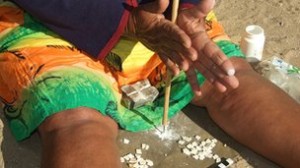 (9) Before the magic of Menlo Park arrived, for most of our history we were kept under the yoke of night; and now it seems our history is even longer than we realized: Recent archeological findings in South Africa pushes the advent of human civilization at least 20,000 years back. Even more interesting though, these über-ancient artifacts share a strong resemblance with the tools still used by the San hunter-gatherers to this day. I guess the old saying "If it ain't broke..." still prevails after all.

(8) Thousands of human generations lived and died before we learned to preserve their memory against the passage of Time. Some of the best known accounts from ancient times are to be found among the books that eventually came to be known as the Bible, which nowadays is largely dismissed as lacking in chronological accuracy by the majority of (secular) academics and historians. Still, from time to time certain types of evidence crop out, which seek to reinforce the notion that much of what is comprised in the Ancient and New Testament is --although inaccurate and fictionalized-- actually based on true historic events. The latest of these findings is a tiny seal excavated in the Judaean Hills near Jerusalem, which seems to depict the famous story of Samson fighting a lion, as depicted in the book of Judges. 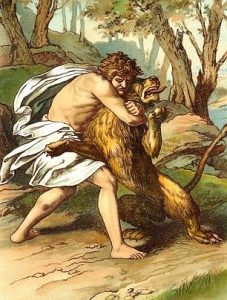 This little artifact may indeed prove the story of Samson was popular when it was crafted, BUT... does it mean the story really happened? After all, thousands of years from now future archeologists might find a lot of evidence supporting the popularity of a certain individual known as Superman, who kind of fits the role of Samson in our modern society. I guess the quarrel between believers and non-believers will rage on 'til the coming of Armageddon.

(7) Some Creationist would have you believe men co-existed with dinosaurs during Biblical times, in some sort of bizarre & pious version of The Flintstones ---Yahweh Yahweh Doo!!-- and now an Aussie billionaire is seeking to correct Noah's mistake of leaving our beloved reptilian titans out of the ark. Clive Palmer wants to boost the COOL in Coolum, Queensland, by building a real-life Jurassic park, which hopefully will have a whole army of steroid-pumped Steve Irwin's copycats ready to yell "Crikey!" every time they have to put a triceratops into submission.

The first time I asked Ben about this Palmer fellow I suddenly had the urge to idolize, he replied via e-mail he's the Down-Under version of Lex Luthor (sans Superman) who's also planning to re-create the Titanic (hopefully, sans the iceberg!). Be that as it may, my geek nature compels me to concede ole Clive the benefit of the doubt, and I'm looking forward to the day he welcomes me to Jurassic Palmer sporting a beard & an amber-jeweled cane --I would plan my visit WAY AFTER the first couple of weeks though , when I trust the park's generators, electric fences and door locks will have been scrupulously  tested and raptor-proofed.

(6) But if you just can't wait for Mr. Palmer to finish building his multi-acre tourist buffet, you can take a trip right now & try to capture --photographically at least-- that beloved Scottish plesiosaur living on the murky waters of loch Ness. To keep the hope alive, Nessie has deigned to pose for the camera once more, at least according to George Edwards, the captain of Nessie Hunter IV, a boat which offers tours in the loch to would-be monster hunters on vacation.

'It was slowly moving up the loch towards Urquhart Castle and it was a dark grey colour. It was quite a fair way from the boat, probably about half a mile away but it’s difficult to tell in water.' 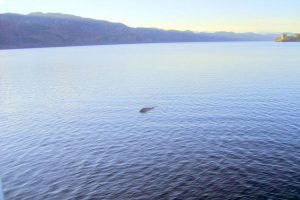 The image, which shows what looks like a hump (or stiff fin) protruding from the water and leaving a faint trail, has caused the expected response among the true believers and the debunkers: the first think it's the real deal, while the others suspect it's a hoax --specially considering how the person who took the photo would directly benefit from its authenticity, even though Edward claims he sent the image to the US for 'photo-analysis' --Edwards sez it was analyzed by military experts, but my money's on Animal Planet-- and he received confirmation that whatever he captured is an 'animate object.' The jury is still out, but personally I concede the photo is interesting, so I'll keep my fingers crossed.

(5) The British isles are home to many mysteries including Nessie. The seasonal crop circles that tend to, well... crop out from the wheat and barley fields each Summer are not just exclusive to her Majesty's realm, though. Proof of that is this recent formation which appeared in an eastern Washington wheat field owned by Greg & Cindy Geib, who found the agro-glyph more amusing than alarming. Memo to Mr. & Mrs. Geib: just keep a baseball bat and a couple of glasses filled with water close at hand, just in case.

(4) Those chameleon-like aliens may not like to hang around water too much, but some people think they might prefer to visit places of unusual human activity. Like the Olympic games, which gather so much attention and is probably the highest-rating televised event in the planet. It turns out that during the opening ceremony a camera outside the stadium managed to capture an object which appeared to have all the characteristics of a bonafide domed flying saucer. LA 84 all over again!

The moment I saw the video the 1st thought crossing my mind was "Great --now we all owe Nick Pope a big apology!". Luckily, the Olympic saucer story was quickly deflated, and by 'deflated' I mean it was literally nothing but the famous Goodyear blimp, which had turned its lights off so it wouldn't interfere with the scheduled light show at the stadium. Because seriously, what the blimp do we know about alien hobbies and interests anyway?

(3) So there were 2 conspiracy theories we managed to discard this week: One was the paranoid warnings that the Illuminatic 1% was planning to stage a holographic blue-beamed alien invasion during the Olympic games' opening ceremony; the other was that infamous --and truth be told infuriating-- asinine assertion that we never went to the Moon, and that the Apollo landings were nothing but televised hoaxes broadcast from some classified TV studio deep inside Area 51

Well, I guess the Apollo deniers are just gonna have to eat a whole lot of lunar regolith alone with their words: recent images from the Lunar Reconnaissance Orbiter Camera  (LROC) clearly show the shadows cast by the flags left by the Apollo astronauts on the surface of our moon --all except the very 1st one left by Buzz & Neil, since it was blown by a wind turb --I mean, the Eagle's thrusters!

(2) How long will the American flags remain standing nobody knows. It might not be for a long time, now that the Chinese are quickly catching up in the space exploration game, and are planning to send a nuclear-powered rover to the surface of the moon by next year. I can already see the little Communist rover knocking down the flags followed by an "Oops! Soly, Amelicans!" on the tube. 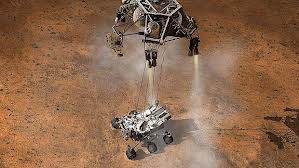 (1) But even if the Chinese do manage to land on the moon in 2013, their little rover will NEVER be able to eclipse the impact of NASA's Curiosity, which hopefully by the time you're reading these lines will have managed to successfully pass the 'Looney Toon-esque' 7-minute terror test, and have already transmitted its first images to a cheering audience at JPL and all across the globe.

Because frankly, the thing that frustrates me the most about the stagnant state of affairs in space exploration, is that we still haven't grown beyond the stupid nationalistic one-upmanships that characterized the Cold War-era space race. The thing that personally excites me the most about this new mission to Mars is not just that this is gonna be the biggest & baddest robotic explorer ever, but also that it's the resulting culmination on the efforts of a whole international & multidisciplinary team of experts, like my compatriot Rafael Navarro-González, who was in charge with designing the Sample Analysis at Mars micro-laboratory (SAM) which will be integral in determining the habitability of Mars in past and present times.

It's time we go beyond flags and banners, and realize we ALL speak for our planet and our species. For the sake of future generations, it's about damn time we grow up.

Until next time, this is RPJ jacking out. You did good today, and for that you get 2 cookies instead of one.

When Aliens and Creatures Clash