The Strange Saga of Kenneth Goff

Born in Delavan, Wisconsin in 1914, Kenneth Goff was a strange character with intriguing links to the early years of Ufology that many have either forgotten about, or simply have no awareness of at all. Which is a pity, since the Goff saga is  one of truly intriguing and conspiratorial proportions! It's also a subject that - as a little bit of a teaser - I'm heavily into for a forthcoming book, so any and all comments, observations and information would be very welcome and appreciated!

Described in now-declassified FBI files of May 6, 1955 as “a self-styled freelance Evangelist who for the past number of years has been speaking around the U.S. regarding the threat of communism to the U.S.,” Goff routinely delivered lectures to interested parties that included: Treason in our State Department; Should we use the Atom Bomb?; Red Secret Plot for Seizure of Denver; and Do the Reds Plan to Come by Alaska?

As the FBI additionally noted: “Also, some of the titles of Goff’s books, which he publishes voluminously are: ‘Will Russia Invade America?’, ‘One World, A Red World’, and ‘Confessions of Stalin’s Agent.’” But, the FBI had other concerns about Goff. He had once been a rabid commie himself, and there were certain figures in the Bureau that believed Goff was not quite the now-anti-communist that he professed to be. Rather, there was a suspicion that Goff’s had gone deep-cover and his red-hating ravings were merely a collective, ingenious ruse to camouflage his real intent: establishing networks of communists sympathizers across the United States. 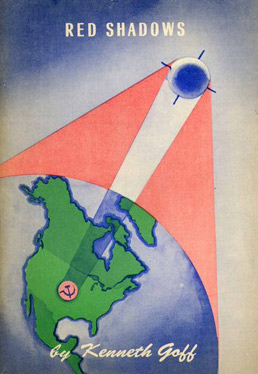 The FBI certainly had a fine stash of material on Goff, who, it was recorded in disapproving fashion: “…is a self-admitted former member of the Communist Party,” and who “…was found guilty by jury trial on February 25, 1948, in United States District Court, District of Columbia, and was fined $100 as a result of the subject’s placing anti-communist signs before the Soviet Embassy in Washington, D.C.”

FBI files on Goff also recorded that: “The ‘Rocky Mountain News’ on October 25, 1951, contained an article stating that three Englewood persons were ordered to appear in Denver Municipal Court as an aftermath of the ripping of the Soviet flag yesterday at Civic Center. Mr. and Mrs. Kenneth Goff were two of these three individuals.”

Patriotic Americans might say that protesting outside the Soviet Embassy and tearing up the Soviet flag were very laudable actions for a U.S. citizen to undertake on home-turf at the height of the fraught and dicey Cold War. The FBI wasn’t so sure: “It has been a concern that Goff always ensures he is seen while displaying anti-Soviet tendencies. [Deleted] has remarked that if Goff is still privately ‘of a party mind’ this might explain his public displays.”

Goff was certainly an interesting character, and had made comments in the 1950s about communist-based plans to covertly introduce fluoride into the US water-supply, to create a “spirit of lethargy” in the nation. And: guess what? Goff had a deep interest in Flying Saucers. Indeed, one of Goff’s regular lectures was titled: Traitors in the Pulpit, or What’s Behind the Flying Saucers – Are they from Russia, Another Planet, or God?

But it was not so much from the perspective of UFOs being alien, Russian or from Heaven, however, that interested Goff. His concern was how the UFO subject could be utilized as a tool of manipulation and control by government. 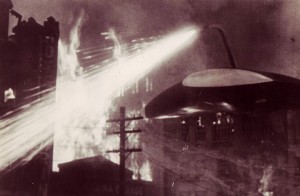 In his 1959 publication, Red Shadows, Goff offered the following to his readers – which, of course, secretly included the FBI: “During the past few years, the flying saucer scare has rapidly become one of the main issues, used by organizations working for a one-world government, to frighten people into the belief that we will need a super world government to cope with an invasion from another planet. Many means are being used to create a vast amount of imagination in the minds of the general public, concerning the possibilities of an invasion by strange creatures from Mars or Venus.”

He continued: “This drive began early in the 40’s, with a radio drama, put on my Orson Welles, which caused panic in many of the larger cities of the East, and resulted in the death of several people. The Orson Welles program of invasion from Mars was used by the Communist Party as a test to find out how the people would react on instructions given out over the radio. It was an important part of the Communist rehearsal for the Revolution.”

The now-infamous Welles broadcast was, of course, based upon H.G. Wells’ acclaimed novel War of the Worlds. And while, today, it is fashionable and almost de rigueur within ufological circles to suggest conspiratorial and nefarious aspects the Welles broadcast, it was far less so in the early 1950s.

Goff, then, was quite the prophet – and particularly so when one takes into consideration the fact that he had been mouthing off about War of the Worlds, a “one-world government” and a secret program to manipulate the public with staged UFO encounters as far back as 1951. Or, if not a prophet, he may well have acquired a fair degree of inside-information. Kenneth Goff, an enigma to the end, died in 1972 while still only in his early sixties.