An Encounter with the Hat Man

Rebecca was six years old in 1978 when something terrifying walked into her life.

“When I was a child I saw what I now know is called the Hat Man,” Rebecca said. “The Hat Man I saw spoke to me.”

Although she now lives in Florida, Rebecca grew up in Missouri, and spent parts of 1977 and 1978 in her grandmother’s house in Independence, Missouri.

“During this time in my life my mother, sister and I lived with my grandparents off and on due to our own circumstances and the fact that my grandfather was in and out of the hospital,” she said.

Rebecca remembers other relatives staying in her grandparents’ house at that time, taking the spare bedroom she usually shared with her sister. That night, Rebecca and her sister slept in her grandmother’s room, and soon discovered they weren’t alone. 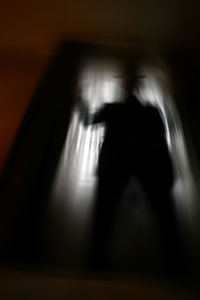 “My sister and grandmother were sleeping in the bed like normal, and I was sleeping between the two of them with my head at the foot of the bed,” Rebecca said. “I had a terrible nightmare, one where the dresser drawers were opening and closing on their own and ghosts and clothing were flying out.”

Rebecca remembers her dreamself lying in the same place as her body slept.

“Most dreams are in other places, or familiar places, but never from the perspective of where you are actually sleeping,” she said. “I woke up from the dream very afraid.”

Terrified, she gently kicked, trying to wake her grandmother, but couldn’t rouse her.

“I debated getting up and finding my mom, but I would have had to walk past the dresser from my dream and decided that was too scary,” she said. “I turned my gaze away from the dresser and up to the window behind the headboard of the bed and that is where I saw the Man.”

The Man, a dark, looming figure, seemed to stand on the headboard, but Rebecca now wonders if the Man stood behind the headboard and was extremely tall.

“The Man was wearing a long flowing coat, a top hat and carried a cane,” Rebecca said. “He had no real features, but was a solid object that blocked the light from the window behind him. I was terrified because there was someone else in the room and because I recognized it as non-human.”

Rebecca and the Hat Man stared at one another for what could have been minutes, or seconds, when the figure lifted its arm and pointed at her. 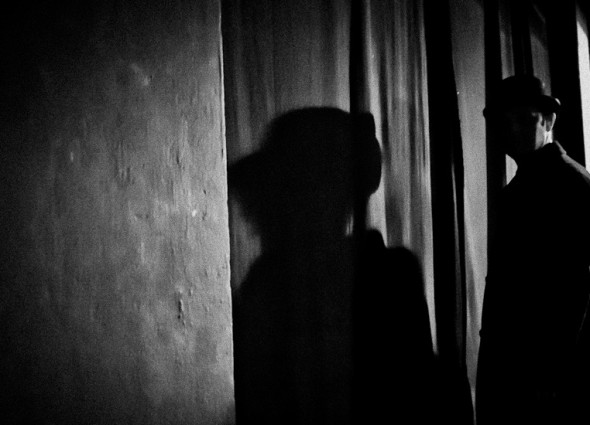 “He said, ‘This is your last chance,’” Rebecca said. “His voice did not fill the room. The best way I can describe it is that it filled my head. The voice was flat with no residual sound, as if everything surrounding the words had been removed.”

After the Hat Man spoke those five cryptic words, he put down his arm and disappeared. She told her family of the encounter the next day, but they paid little attention.

“Little kids are always filled with stories that grown ups nod and smile while hearing,” she said. “I vaguely remember being afraid of grandma’s room for a while, but not much else following the incident.”

She didn’t bring up the Hat Man encounter again until her teens; this time her family listened.

“Everyone believed in ghosts, so it was another neat ghost story from a family member for everyone except my aunt,” she said. This is because her aunt has had more than one ghostly encounter, all eerily similar to her own. “She said she had seen the same man in that same house.”

Although the fear of her grandmother’s room has long since gone, along with the terror of that long ago moment when she met the Hat Man, one question remains.

“I’ve tried to figure out what, ‘This is your last chance,’ meant,” she said. “My grandfather died somewhere around this time, but I can not be certain if the Hat Man appeared before or after his death. I do know that grandpa was not in the house at the time, but he spent quite a bit of time in the hospital toward the end of his life. Was the Hat Man telling me this was my last chance to talk with him? I don’t know.”