An Ode to Terror: The Steiger Effect

It always happens around this time each year: I'll receive an email in my inbox that features either a story or article that just gives me the creeps , or maybe a clever video with a goblin that jumps out toward the end and reminds me of the kind of primal terror seldom afforded most adults in the Western world. True, in the modern day, our fears are primarily those that arise from doubt or worry associated with the collapse of the banking industry, or perhaps the imminent threat of international conflict. Some of us are terrified of how we're going to manage to get our bills paid on time, or more simply, what unknown challenges tomorrow may hold.

Getting back to those emails from earlier, I should probably mention the man behind such mischief, for his is not only the playful variety that reminds us of the fun and laughter celebrating the macabre can bring this time of year, but it is also steeped in the serious, and perhaps most thorough study of the strange and unusual that any one individual has undertaken since Charles Hoy Fort. Indeed, the seeker of strange of which I speak here is none other than Brad Steiger, a veritable master of the mysterious and author of almost countless numbers of books and articles on the unexplained.

Brad's work is very unique because, to me, it is capable of evoking a kind of unsettling nature that is both fun and frightening. As children, the kinds of things we associate with fear are far different from the "real world" fears I had described earlier: we might imagine a creature hiding under our beds or peering in our windows; we might just as well have feared the nighttime visitations of some ghostly onlooker, standing (or hovering) over our beds and watching us while we sleep. For me, these are the fears of days long past, and in retrospect, that variety of "fear" is one that I've almost grown to miss; there is a certain nostalgia associated with it, and without question, the late night viewings of classic monster films I recall as a child were the kind of "terror" that not only kept me awake at night, but kept me wanting more. 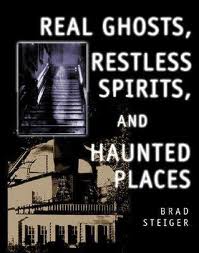 Though I don't often write gushing dissertations on my heroes, let alone long examinations of their life and work, Steiger makes for a definite exception here (which brings to mind the new updated edition of his Real Ghosts, Restless Spirits, and Haunted Places that came in the mail the other day). My justification, in this instance, is because the life and work of Brad Steiger is far too broad, complex, and fascinating for any Fortean to overlook. His influence has indeed been profound, and his eloquent approach to the study of strange phenomenon has both entertained--and terrified--his readers for half a century. Few, if any, can lay claim to such an immense scope of material as that which Brad has covered in his years of probing the dark corners of reality in search of the impossible.

I first became acquainted with Brad Steiger's work as a child, discovering books like The Seed and Real Monsters, in addition to various editions of such things as the Project Blue Book files, for which Steiger had been the editor. In my early twenties, I actually began to correspond with Brad, after being "introduced" to him during a guest appearance he made on Joshua Warren's radio show, Speaking of Strange (which, at the time, I had been serving as the producer and engineer). My interest in the unexplained, and more importantly, building a career around writing about the unexplained, soon prompted an interview I conducted with Brad, which to this day stands out among the most fascinating I've ever shared with a guest.

Steiger, while well versed in many fields of interest, is not best known as a cryptozoologist; his contributions to such areas as ufology, the contactee phenomenon, and of course, ghosts and hauntings, have been innumerable; hence, at the time, I felt that Brad's perspective on Bigfoot and other mysterious creatures might be particularly interesting, if not a bit off the beaten path. Not only was his commentary unique, as I had surmised that it would be, I was floored by not just his knowledge of the subject, but also by the number of incredible experiences he described having over the years.

For instance, Steiger recalled receiving a phone call late one evening, only to hear whipping and howling wind in the background, serving as eerie accompaniment to the familiar voice of Scottish zoologist Ivan Sanderson, who had been exclaiming excitedly about having found something remarkable.

"What did you find, Ivan?" a young Steiger, who was then still quite new to the field himself, had asked.

"I've found what I've searched a lifetime for," Sanderson said over the howling wind. "Proof that the Abominable Snowmen do exist!" Of course, he had been referencing the events that transpired around the time of the discovery of the so-called "Minnesota Iceman," a cryptozoological case which later was said to have involved a large rubber model of a caveman-esque troglodyte. However, Sanderson and his associate, Bernard Huevelmans, had maintained that the initial specimen they examined, which had been encased in ice, had been quite authentic... right down to the stench associated with the frozen corpse as the ice around it had begun to melt. Even in those tender years, Sanderson had thought enough of Steiger to issue a call to him at such an hour, with hope that he had secured proof of the extraordinary. 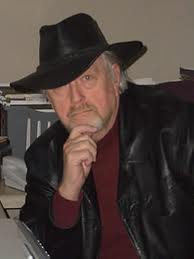 But what had always drawn me to Brad's writing over the years, in particular, had been the way he could manage to take a very matter-of-fact approach to his writing, and yet still maintain a certain mystique. When you read Brad's words, they are not only interesting, they are at times captivating... and yes, they are often very frightening. He writes of amazing events and circumstances that could only exist in the embellishments of most popular fiction authors today, and yet he makes you believe what you've read, often with a clarity and honesty our finest historians have lacked. But unlike the historian, or the novelist, for that matter, Steiger's works are perhaps most captivating because he has lived the circumstances he divulges; his are not remembrances derived from first hand accounts of yesteryear, nor are they the stuff of the imagination; his experiences are more often his, or of those who have bravely shared their stories with him over the course of the last few decades.

And Steiger, as a result of having lived the life of a true Fortean paranormalist, believes these stories himself, in addition to helping make his readers believe them, and the infinite possibilities this universe can hold. Thus, while there are times where we can seek to look for the general message that this haunted universe may be trying to send our way, in this instance, perhaps the medium itself is most important. Without question, Steiger and his work are a living example of the strange and unusual right in our very midst. To wit, having written and cataloged so much material on the strange and unusual might in itself constitute being called "paranormal." And when it comes to simply wanting to read something that still manages to capture that nostalgic fear of yesteryear, ten-to-one I'll always rely on what I call "The Steiger Effect" and go retrieve one of his many volumes from the wall... a perfect compliment for any time of the year, although around Halloween, it becomes a very special treat indeed.

Read, and enjoy... but be warned: world-view shifts of the terrifying variety may ensue throughout!

UFOs: What the Hell?