Fade to Brown: The Curious History of a Famous Phantom Photo

Is it possible to see spirits of the deceased? It has long been claimed, after all, that a disembodied spirit--a ghost, in essence--can manifest as an apparition that moves about largely unnoticed, save only for when it becomes visible and frightens any nearby onlookers who happen to catch a glimpse.

Of course, one can only guess by what means by which such an apparition might become a tangible form and materialize in this way. On the other hand, for many, those things which the eye cannot see may become visible using other method; primarily this would entail the use of sophisticated technology that enhances one's natural ability to perceive worlds beyond.

And yet, it has long been the claim that something so simple as photographic process of capturing light on film may be useful in revealing the presence of invisible specters in an environment. Such was the case with a very famous haunt alleged to reside at a large manor in Norfolk, Great Britain, known as The Brown Lady of Raynham Hall after the dark colored dress she wore. For year, many have claimed a photograph that allegedly shows her descending a staircase may be some of the best proof of her existence, as well as that of spirits in general. But despite the appearance of an apparition in the picture, were the circumstances under which the ghost was allegedly photographed truly reliable? 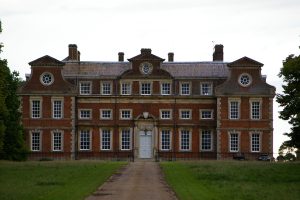 The story goes that a photographer, Captain Hubert C. Provand, was commissioned by Country Life Magazine in 1936. Though their stated objective had been to photograph the house for an article that would be appearing in the magazine, but during the Captain's visit, he and his assistant, a Mr. Indre Shira (apparently a pseudonym) had set up the camera aimed at a staircase when the latter spotted an apparition moving down the staircase toward them. He quickly advised Provand to remove the lens cap so that a photo could be taken, and the image that resulted appears to show a woman's figure descending the staircase.

Famous ghost researcher Harry Price had been convinced that the story the men shared was indeed true, based on conversations he had with them, in addition to examination of the original negative, which appeared to remain un-doctored in any way. And yet, despite the well-known examinations of the photograph, it is less often mentioned that there are a number of things that can be seen in the photo which appear to indicate that, despite not being a "fake," it was likely an image that had been taken rather poorly.

In 2006, Alan Murdie wrote for the Fortean Times about the strange "anomalies" that one can begin to spot within the famous frame upon close inspection:

Anomalies in the picture become apparent when a light and uncropped copy of the Brown Lady photograph is examined. The anomalies do not centre upon the figure – upon which the eye naturally concentrates – but what is going on in the foreground and background. On the left hand side as the viewer sees the picture, (i.e. on the Brown Lady’s right hand side) hangs a framed picture on the wall. Immediately beneath, seemingly hovering in the air, is a duplicate image of this picture. Equally, when one looks at the length of the banisters, they do not connect, and the angles suggest that the camera has been shaken and the staircase accidentally photographed twice. Several luminous patches are also visible which suggest a doubling of the image throughout.

In other words, the photo originally taken in 1936 by Provand and Shira seems to have a number of defects which shed doubt on the likelihood that the "ghost" in the picture is indeed a spirit of the deceased Lady Dorothy Walpole, as many have speculated over the years. But what is even more odd about the photograph is the way that the image not only has obvious "anomalies," but that on a few occasions in the past, these have been conveniently cropped out of the photo, and by people with apparent knowledge of the flaws. Does this mean that the flaws were overlooked as insignificant in relation to the "ghost" of Raynham Hall, which the photographers claimed that their image showed? Or were the flaws overlooked intentionally, and despite the clear manner in which they indicated that the "Brown Lady" seen in the image may have indeed simply been an unintentional photographic mishap?

The absolute truth may never be known in relation to the story of The Brown Lady and her famous photo. However, when looking at the entire set of information regarding this case, we do see that there are a number of elements that should bring to question whether the photo could have simply been faulty, rather than the bigger question to which so many tend to gravitate: does life exist after death? Indeed, maybe it does... but as things turn out here, our Brown Lady's debut may not have been the "proof" we were looking for, after all.