Sam Raimi's new film, The Possession is based on a true life object called the Dibbuk Box and with the release of the film, we thought it was only appropriate that we look back at the history of the Dibbuk Box and its journey with Mysterious Universe.

With each mention of the Dibbuk Box bad luck seems to follow. Many listeners of the Mysterious Universe Podcast have begged and pleaded never to mention its name again, while others have "mocked the box" only to end up meeting its wrath.

Below is just a small selection of the emails we have received, as well as links to each episode the Dibbuk Box has featured on.

Upon my boyfriend arriving home, and me having nothing to really talk about, I decide to share the story of the dibbuk box... which I am really beginning to wonder if that is what caused me to wake very early in pain.

The following morning (at around 3am). I woke up to a horrible pain in the lower left back of my skull. It was as if someone had hit me with a hard object and there was swelling to compare to the the right side. I had (and am still suffering) headeaches and swelling to this peculiar injury that seems to have developed over night for no reason whatsoever. I had not been out drinking the night before and I never get headaches...I certainly would remember my head getting hit in any case.

This happened while I was asleep. I can't describe it better than feeling like I was clubbed over the back of the head

Stop talking about the D-Box!!!

The last time you mentioned it, I and my bf both got a yeast infection, and I've had multiple things break down in my house! My only toilet has broken, my only shower is broken, my pool has developed several problems, and WHO KNOWS what will happen now!

The first night I tried listening to your interview on the box, I fell asleep within the first 15 minutes or so (it was a very loooong day at work that day). About 4 hours later, I woke up to complete darkness. My apartment is off busy streets, and it's facing a wooded park, so there usually isn't much light... but it was much darker than normal. Pitch black. Come to find out, the entire complex's power was knocked out. Nebraska summers are a beast, and it was about 85F at 3 am.

The next night, I finally sat down and listened to the entire show. Great interview! Gave me goosebumps just like the first time I heard about the box. Here's the strange thing, though. I dreamed the Dibbuk box that night.

I don't really remember much of the dream before the box... but I remember walking into a coffee shop in my dream, and seeing an old woman sitting at a table with the box. She definitely didn't match the dread-locked horror that others have described. She was a short, stout babushka. She was in one chair, and next to here in the other was the box. The dark brown grapes and vines on the front of the box, the stone tablet and the chalice, the inscription on the back of the box, the wine rack on the inside of the doors... I saw it all. I don't usually remember dreams, but the box is still crystal clear in my head, weeks later.

I don't know if I became lucid at that point, but I knew that it wasn't supposed to be there. I knew that I wasn't supposed to interact with it or even look at it. The little old lady sat there silently smiling. She didn't say a word, but it felt like she was trying to give it to me. At that time, I woke up.

I have a background in psychology, so when I woke up, I kept telling myself that I primed myself for that dream by listening to the show about the box. The only problem was...I had never seen the box before, as far as I can remember. That next day, I checked out the websites, and I was blown away. The box from my dream matched the box on the website exactly.

The last week I have been listening to all the Dibbuk box episodes, and yesterday I listened to the episode where the phones cut out while you were interviewing the Dibbuk owners.

At 4am this morning my fiance wakes me up. He had been up since 2am dealing with a severe pain in his lower back. The pain was so bad I could see tears in his eyes and he could barely walk.
I took him to the Emergency Room, and he was diagnosed with kidney stones, or should I say, Dibbuk stones.

Eventually my curiosity got the better of me and I found the Dibbuk box episode, I was joking with my boyfriend that perhaps I shouldn't listen to it and risk the bad luck. I was in our room listening to the podcast and he went into the living room. Apparently his x-box broke - it got the dreaded ring of death. He blames me. I blame you.

I ended up getting sucked into listening to your recent episode when you were talking with the owner of the Dibbuk Box. I've purposely not listened to past episodes about it because of all the bad luck stories that seem to coincide with that box, and I've had enough bad luck this year.

Anyway, I listened to it and thought if I didn't think about the box after tuning in I'd forget about it and nothing would happen. I did forget about it, and had a great Friday night out going to dinner and watching a music gig.

My girlfriend hardly ever gets drunk. Out of the 3.5 years we've been together, I can only remember one time she has really had a lot to drink. This night was going to be the second time.

Driving home, everything was fine. Part of the way, I pulled over cos she wasn't feeling that great. So she got out, got some air and got in feeling a bit better.

5 mins from home, on a stretch of road where I couldn't pull over because I was in the far right lane getting ready to turn, she says I can't hold it in. I knew what she meant, and I flew across the 3 lanes on the road to pull over where I could but it was to late.

She threw up all over my brand new car.......and herself. The seat, the floor, the inside of the door of my beautiful new car.

The thing is, it was only when I woke up the next morning it hit me, I totally forgot.........It was that damn box!

I was up late as usual one night with nothing better to do than watch Youtube and check Facebook when I recalled I'd been meaning to look further into the Dibbuk box. I read a few articles here and there online, and pretty much dismissed the whole thing, thinking nothing bad has ever come of me not really having any faith in the stories so why believe?

The rest of my night was uneventful and I had all but forgotten about the subject by the next day. The following night however has changed my view completely.

As I slept I had sudden flashes of a face, the very same I've heard described in others dreams. A woman with odd grey green skin and ratty hair; her mouth wide open screaming at me. Her face flashed faster and faster until I jerked awake. When I awoke I had the strange feeling she was there, in my room. I shut my eyes and tried to ignore it. But as I did, I could feel a pressure on my neck, not like hands but a pressure full way round my neck holding me down. I pushed with my hands down into my bed to free myself but the force was too great. I tried to yell out but the force on my neck was too great. The womans face once again flashed before my eyes again and again, when all at once it just stopped and I was free. I looked around and my room was empty.

Well the following day I told my girlfriend what had happened. She had never heard of the box and I told her to look it up before I related the story. As she brought up a site on it her computer, it froze and crashed, and when she had restarted it and tried the site again, it would fail to load the site.

If I didn't think there was anything to the story before, I am now a full believer and will never bash the box again.

Yesterday I was at University and walking back to my car while telling my friend about the box and the bad luck it can bring. When I got back to my car, I found that someone had reversed right into the rear of my car, leaving a very large dent and several cracks in the rear!

It could be just really bad coincidence, but when I think about how I had been discussing the Box moments before getting to my car (and throughout the day I must admit), and have never had any sort car accident or collision before, I wonder if this is another instance of Dibbuk Box fallout 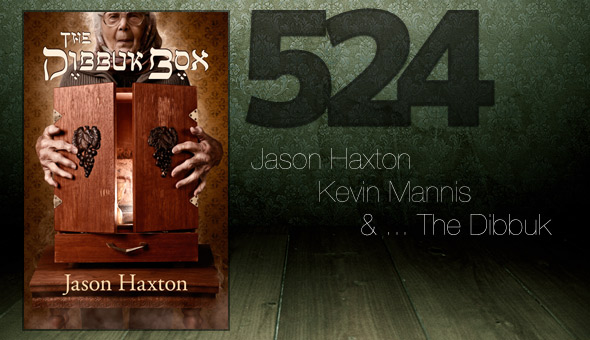 The Future of Ufology