The Strange Saga of Richard Shaver

A couple of nights ago, I did a radio-interview, during which I was asked about my views on the notorious - but admittedly fascinating and intriguing - saga of Richard Shaver. Well, for those who may not be acquainted with it, here's the story. The editor of the now-acclaimed, and near-legendary, Amazing Stories magazine from 1938 to 1949, Ray Palmer, who was born in 1910, had a hell of a hard time as a kid: at the age of only seven, he was involved in a violent accident that shattered his spine, something that directly, and severely, significantly stunted his growth and provoked endless health-related issues throughout his entire life.

None of us, unless we have personally undergone such a traumatic event, can even begin to imagine how we might react in the aftermath of such a situation in the formative years of our childhood. Maybe we would do precisely what the young Ray Palmer did: he became somewhat reclusive – as a result of cruel taunts from local kids and ignorant adults. And, from the solitary atmosphere of his bedroom, Palmer buried his head deeply within the imaginative pages of the science-fiction-themed magazines of the 1920s and ‘30s.

If the real world was just too much for the deformed and damaged Palmer to deal with, then the realm of futuristic fantasy would have to take its place. And it most certainly did. In the final year of his teens Palmer started co-editing his very own fanzine, titled the Comet, which was enthusiastically, and eagerly, welcomed by the burgeoning science-fiction community of the day. But the biggest event in Palmer’s life came in 1938. In fact, it was a veritable dream-come-true.

Ziff-Davis, the publisher of Amazing Stories magazine, had just moved its base of operations from the Big Apple to the Windy City, and, in the process, dumped its editor, one T. O’Connor-Sloane. As Palmer didn’t live too far away - in the heart of Milwaukee – and Ziff-Davis knew of his Comet publication, an offer was made to Palmer that he could not, and most certainly did not, refuse: a full-time gig as the editor of Amazing Stories. 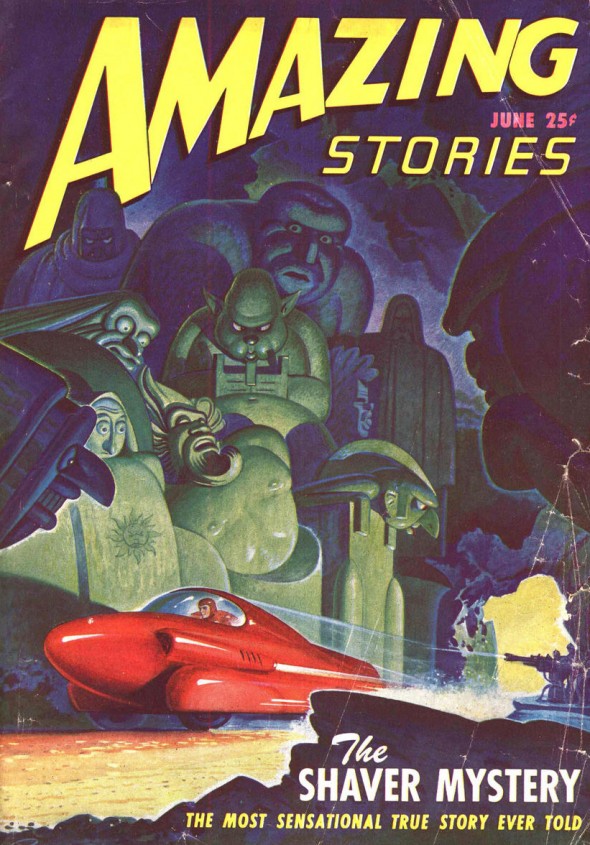 Today, Palmer’s position as head-honcho of Amazing Stories is remembered, chiefly, for two specific reasons: (a) he bought and published Isaac Asimov’s very first, professional science-fiction story, which was titled Marooned off Vesta, and (b) he became the leading light in a decidedly odd affair that became known as the Shaver Mystery. But, whether the Shaver saga was science-fiction or science-fact, is a matter that still has people guessing and musing to the present day.

The Shaver Mystery had its origins at the height of the Second World War. It was a relatively normal day in 1943 when Palmer was opening the daily delivery of mail that regularly poured into the offices of Amazing Stories, and came across one particular missive penned by a certain Richard Shaver. And weird barely begins to describe it. Shaver wrote that he, personally, had uncovered a sensational and terrifying secret: in our distant past a race of ancient, highly-evolved entities lived right under our very feet. Massive caverns, huge caves, and near-endless tunnels, were the dark, damp places they called home.

At least, that is, before they decided to exit the Earth and headed away to a whole new, light-years away world on the other side of the galaxy. But, when these particular entities said their final goodbyes to our planet, they left behind them something truly sinister and abominable: their diseased offspring, which were said to be called the Deros.

And mentally-deranged, sick-puppies they were, too. Taunting the Human Race, finding more and more ways to screw up our lives and plague our minds, and even worse, using us as food were just some of their bad habits. Yes, according to Shaver, human beings were being systematically kidnapped and, equally-systematically, devoured by cave-dwelling monsters.

If you were one of the poor souls destined to end up on a Deros dinner-plate, it can’t have been much fun. But, for Palmer, this is exactly what it was. Not only was Palmer the editor of Amazing Stories, but he was a highly astute editor, too. He quickly grasped the significance and potential-enormity of the story that had fallen into his lap. He knew it was one that would likely highly-entertain the readers of the magazine to an infinite degree. And he realized Shaver’s ranting probably wouldn’t hurt sales-figures of the magazine, either. History has proven Palmer correct on each and every one of those three counts. 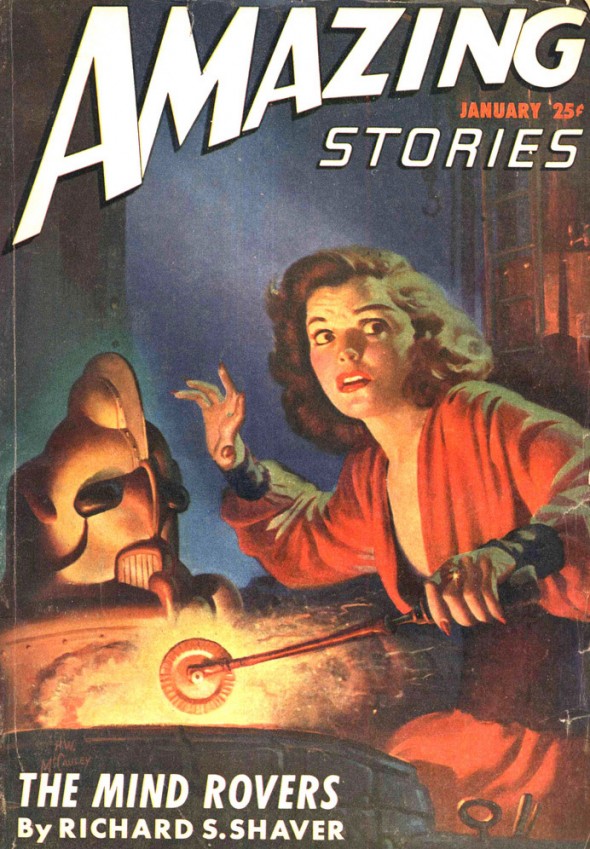 Certainly, before he could proceed any further, Palmer realized that he needed much more from Shaver. Important questions needing answering: had Shaver been to this terrifying underworld? Might he even have personally encountered the deadly, psychotic Deros? But, if not, then from where was Shaver getting his information? This is where things get even more warped. Shaver eagerly wrote back to Palmer with the answers. Although, one is strongly inclined to suspect the answers that came Palmer’s way were not the ones he was expecting.

Shaver wrote that, in 1932, he was employed as a welder in a car-factory. Most days were routine. One most certainly was not. On the occasion in question, wrote a deadpanning Shaver, his welding-gun began talking to him. No, that’s not a typo. It did so, said Shaver, in classic, scientific gobbledygook tones, “by some freak of its coil’s field attunements.” Of course, what else? Telepathically-delivered tales of a horrific nature were beamed into what amounted to Shaver’s mind, all relative to the Deros, their penchant for human meat, and their underground cities.

In fact, so pleased was Shaver by Palmer’s quick reply to his original missive that he penned a 10,000-word-plus brain-storming story that detailed the salient points of the affair, including the outrageous claim that he, Shaver, had been the captive of the Deros for a number of years, prior to making good his escape, and before ending up in the inevitable cooking-pot. 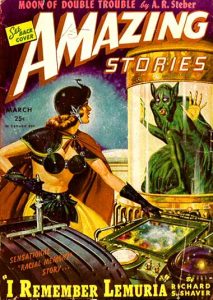 This was absolutely great, thought Palmer, who duly burned the midnight-oil, tidying up and editing Shaver’s story, which finally appeared in Amazing Stories, in March 1945, in a feature titled I Remember Lemuria. Never mind through the roof: sales of the particular issue went through the stratosphere, and both Palmer and the publisher were delighted. Neither, however, was quite prepared for the thousands of letters that poured into the offices of Amazing Stories from a multitude of readers who had become fascinated by the tales of Richard Shaver.

We want more: those were the words coming from the huge readership, and Palmer did not disappoint in the slightest. The Shaver controversy continued for decades, constantly being added to by other characters who claimed knowledge of the Deros and their evil underworld. Today, the entire issue is viewed by the majority of UFO researchers as nothing more than a practical joke, one initiated by Shaver – for who the term nutty-as-a-fruitcake might very well have been invented - and then expanded upon by Palmer, ever-ready to increase the audience-size of his cherished magazine, no matter how tall the tale was.

That said, however, Shaver still has a huge following today. And, after all, who really knows what sort of monstrous entities might be lurking and living deep below us...?

An Encounter with the Hat Man