A Visitor in the Night

During the day the house was oppressive, but when night fell, it grew terrifying. Barbara’s husband left for the early morning shift around 2 a.m., and as she lay on her side in bed, the sound of his vehicle disappearing into the distance, she knew she wasn’t alone in the room.

“I would feel as though someone would sit down on the bed on his side,” she said. Dread gripped her as she lay motionless, the pressure on the bed shifting as the unseen prowler moved closer. “I was so terrified each time as it was so real. I tried to convince myself I was dreaming but tried to breathe normally and not move in case it was an intruder, although I don’t know why I thought that would make them leave me alone.”

She told her husband, who didn’t believe her, until one night he saw this visitor. “What do you want?” he asked as he and Barbara lay in bed. The sudden words in the still night dragged her to consciousness. “I asked who he was speaking to, and he said he thought he saw one of the kids in the doorway,” Barbara said. She looked across the darkened room toward the door to the hall and saw a figure; but she knew it wasn’t one of the children. “It looked so tall.”

After that night, the dark man appeared to the couple often. “It was very dark and appeared to me to be a tall man, although I couldn’t make out features like eyes, or nose,” she said. “(We) experimented with turning lights on/off to see if we could determine if something was throwing the light in such a way as to make it appear someone was standing in the doorway to our room, all to no avail.”

As she endured the torment of this figure sitting on her bed while her husband was at work throughout 1993, the dark man became more brazen. “The feeling of someone sitting on his side of the bed continued,” she said. “Then became the feeling that someone would lie down on the bed. Each time I was paralyzed with fear.”

Barbara began to understand why. Something was wrong in the house; an ominous, tense feeling grew that year, but she knew it didn’t come from her dark nightly visitor. “My (husband) and I were not getting along at the time,” she said. “His behavior had become strange enough that I hid the bullets to his hand gun. The vibes in the house weren’t good a great deal of the time.” 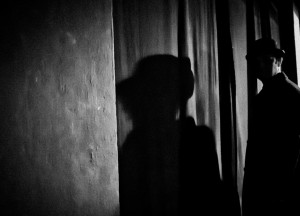 The entity’s advances continued to escalate. “One night after my (husband) went to work I felt the entity in the room behind me and beside my (husband)’s side of the bed,” Barbara said. “I then felt it lie on the bed, then scoot closer till it was spooning with me.” Barbara lay in abject terror as this dark man’s presence all but touched her. “It lay there for a long time, which was the most terrifying event of all.”

The tension in the house eased when her husband moved out. Barbara tried shifting her bed around the room to see if a different position would confuse the dark man, but it didn’t. “He was always there,” she said. “Just standing and, I assume, watching me.” She positioned her bed diagonally across from the door so she could see the dark man in the doorway whenever she opened her eyes; but her feeling for the dark man quickly changed.

“I honestly felt no fear of him once my (husband) was gone, but rather felt safe every time I saw him afterward, as though he was watching over me,” Barbara said. “It was very strange to go so immediately from fear to safety in my feelings about him; but I was naturally accepting of the safe feeling.”

A year after her husband left, they divorced, but by that point, she had accepted the dark man into her life. It emotionally pained her when her finances after the divorce meant she had to move away from the dark man. “I had to leave the house as I couldn’t afford two mortgages,” she said. “I had a huge panic attack the evening of the day I gave the landlady a check for the deposit on the rental home and asked her to tear up the check as I simply couldn’t leave the house.” 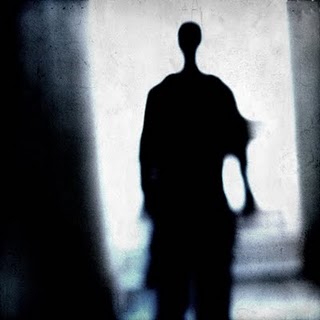 The next day she realized she couldn’t afford to stay in the house with her dark protector, and she moved out. “I haven’t seen (him) since, nor have I felt as though someone was in my bed with me,” Barbara said. “But as I’ve gotten older, I’m 56 now, I’ve wondered more and more what he was and why he was there.”

The biggest question that remains with Barbara, is what would have happened if she’d have acknowledge the dark man once her husband moved from the house. “I think I may have partially smiled in his direction a few times during the night after the separations from my ex,” she said. “But that was the extent of it.”

What was Barbara’s protector? Guardian angel? Shadow man? Or simply the ghost of someone close to her family, just watching out for her? Regardless of his origin, Barbara misses the dark man.

“It’s still so weird to me how comforting he was after my ex was gone and the bad vibes had gone with him,” she said. “I never told anyone of these events until many years later as I had always scoffed at stories about ghosts or spirits and figured people would think I was crazy.”